WWE WrestleMania 37: Predictions, preview, how to watch – The Denver Post 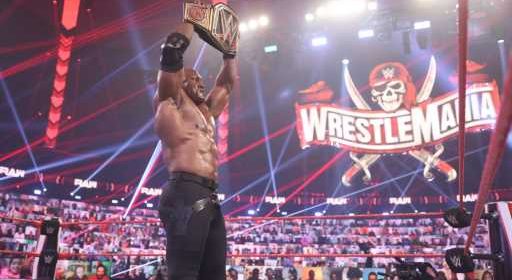 It’s WrestleMania season, so prep those signs, throw that replica championship belt over your shoulder and warm up your voices for some chants.

Here’s what you need to know entering WrestleMania 37, which takes place April 10 and 11 at Raymond James Stadium in Tampa, Fla.

How we got here: The team of Shayna Baszler and Nia Jax will defend their championship on Night Two against one of these four teams who have recently been jockeying for a shot at the belts.

Who should win: The Riott Squad.
Of the four teams listed, The Riott Squad is the only one that’s consistently been a tag team. Plus, Ruby Riott and Liv Morgan are both underrated in the ring and deserve a shot against the champs on Sunday.

Who will win: Lana and Naomi.
For a good portion of 2020, Lana was ragdolled by Nia Jax. It’d make sense for her, along with Naomi, to receive an opportunity to exact revenge against the champions.

How we got here: Rollins returned to the WWE on the Feb. 12 episode of “SmackDown.” After delivering a speech telling the other wrestlers about how they should embrace him as a leader, he attacked Cesaro from behind. After weeks of feuding, Rollins challenged Cesaro on March 26 for a match at WrestleMania.

Who should win: Cesaro.
The “Swiss Superman” has long been known as a superb ringmaster but was never given the reins to be the company’s top dog. At 40 years old, he’s getting limited on time to challenge for one of the company’s top titles. A win over Rollins would propel him to the next level.

Who will win: Rollins.
One of the company’s biggest stars, Rollins and Cesaro are sure to have a fun match to watch. A win here is simply a stepping stone to jump back into the Universal title picture — and perhaps set up a feud with one of the three men battling for the title later on the card.

How we got here: Strowman was angry after McMahon, the son of WWE chairman Vince McMahon, didn’t let him be a part in the “Elimination Chamber” match for the WWE championship. McMahon would proceed to belittle his intelligence over the following months, leading to the 386-pound Strowman to call him out for a steel-cage match.

Who should win: Strowman.
This feud reminds me of the Rainier Wolfcastle movie where the high-school bullies pick on the giant, muscle-bound nerd in “The Simpsons.” Strowman should by all means destroy McMahon but not before Shane-O-Mac jumps off something tall. You know, like a steel cage?

Who will win: Strowman.

How we got here: The New Day won their 11th tag team championship from The Hurt Business on the March 15 edition of “Raw.” Styles and his bodyguard, the 7-foot-3 Omos, soon challenged the goofy, fun-loving pair for the titles at WrestleMania.

Who should win: Styles and Omos.
As much as I love The New Day, this seems to make sense. It presents a victorious debut for the monstrous Omos and it allows Styles to complete the WWE triple crown after having previously held a world title (WWE championship) and a secondary title (he’s held both the Intercontinental and United States belts).

Who will win: Styles and Omos.

Bad Bunny (with Damian Priest) vs. The Miz (with John Morrison)
Singles match

How we got here: Bad Bunny — yes the Grammy-winning Puerto Rican rapper — appeared at the “Royal Rumble” pay-per-view to perform his song “Booker T” (named after the now-retired pro wrestler). The Miz offered him an opportunity to learn to become a WWE superstar under his guidance. Bad Bunny declined, so for the next three months, The Miz and his tag-team partner John Morrison would proceed to torment the musical artist.

Who should win: Bad Bunny and Priest.
How do they not win? This is a classic bad guys finally get their comeuppance scenario, celebrity edition.

Who will win: Bad Bunny and Priest.

How we got here: McIntyre, who was the WWE champion for most of the last year, lost his belt at the “Elimination Chamber” pay-per view after Lashley pummeled the titleholder following the match. This allowed The Miz to cash in his Money in the Bank briefcase — which allows its owner an opportunity at the title at any time of their choosing — and win the title. Lashley would defeat The Miz two weeks later on “Raw” to win the first WWE championship in his 16-year career. McIntyre wanting revenge and his belt back, made the challenge.

Who should win: Lashley.
McIntyre is deserving of finally getting his ‘Mania moment in front of a live audience, but Lashley has potential for a more compelling story in the coming months. The Hurt Business — up until their breakup in recent weeks — had been the most compelling story arc on “Raw” for months. The opportunity to see what Lashley can do with the title seems like it would be more interesting than continuing to see McIntyre with the belt.

Who will win: McIntyre.
The Scottish wrestler was supposed to make his grand splash to main-event status at last year’s WrestleMania. However, the pandemic had him beat Brock Lesnar for the WWE championship in front of an empty arena. Now with a live audience, he will get his long-awaited coronation.

How we got here: Bianca Belair won the women’s Royal Rumble match in January, which earned her a world title shot of her choosing. She officially challenged Smackdown women’s champion Sasha Banks in February.

Who should win: Belair.
The former collegiate track athlete has been primed for a push to the main event since coming up from the NXT roster. A strong showing at last year’s women’s Royal Rumble followed by a victory this year event has her path destined for the big time.

Who will win: Belair.

How we got here: The winning team from Night One’s tag-team turmoil match receives a shot at the titles on Night Two.

Who should win: The Riott Squad.
Continuing what I had in the “who should win” section in the turmoil match, this just further cements the tag titles on a team that’s actually a team. The Riott Squad would be solid adversaries for any future feuds on either “Raw” or “SmackDown.”

Who will win: Lana and Naomi.
Given the uneasy alliance between Jax and Baszler, there could be a fallout for the current tag champions. This provides and opening for the challengers and it brings the feud between Lana and Nia Jax full circle, providing a nice ‘Mania moment.

How we got here: Riddle won the title in a triple-threat match against Bobby Lashley and John Morrison at “Elimination Chamber.” In recent weeks, he and Sheamus began feuding, setting up a bout at WrestleMania.

Who should win: Riddle.
The chilled-out, laid-back champion is just six weeks into his reign. Riddle and Sheamus will have a physical bout, but the titleholder should hold on for the victory.

Who will win: Riddle.

How we got here: A rivalry that harkens back to their indie days when they were known as Kevin Steen and El Generico,

How we got here: Big E, the powerhouse of The New Day, has been the lone representative of the group on “SmackDown” since Kofi Kingston and Xavier Woods went to “Raw.” He beat Sami Zayn for the title in December. Apollo Crews turned heel in January and began his pursuit of the title. Big E narrowly beat him to retain the belt at “Fastlane,” but Crews brutally attacked the champion after the match ended.

Who should win: Crews.
Big E has had a strong run as Intercontinental champion, but it might be time for him to move to bigger and better things — like the pursuit of the Universal title. Crews would be a good successor, particular with his new arrogant persona.

Who will win: Crews.

The Fiend (with Alexa Bliss) vs. Randy Orton
Singles match

How we got here: Randy Orton and Bray Wyatt (“The Fiend”) have had history dating back to 2016 when Orton joined The Wyatt Family. That culminated into a match at WrestleMania 33 in which Orton defeated Wyatt to win the WWE championship. Fast forward to 2020 where Wyatt is now one-part delusional children’s talk-show host and one-part demonic clown from hell (The Fiend). The two had a match at the “TLC: Tables, Ladders and Chairs” pay-per-view that ended with Orton lighting The Fiend’s corpse on fire. He spent months battling mind games with The Fiend’s partner Alexa Bliss until a charred version of The Fiend returned at “Fastlane.” Now they’ll settle their feud at WrestleMania.

Who should win: The Fiend.
Supernatural beings are few and far in between in the WWE’s landscape these days. The Fiend absolutely has that aura and a win over Orton seems right. I mean, how do you defeat an undead clown monster? (Let’s not talk about that match with Goldberg…)

Who will win: The Fiend.

How we got here: Ripley made her debut on “Raw” on March 22 and immediately called out Asuka for a match at WrestleMania.

Who should win: Ripley.
She should have won at last year’s ‘Mania against Charlotte Flair and taken her place on the top of the card. But it’s better late than never.

Who will win: Ripley.

How we got here: After a decade-long retirement due to a neck injury, Edge made his surprising return to the WWE at the “Royal Rumble” pay-per-view in 2019. A year later, starting from the No. 1 spot, he won the whole thing and earned a title shot of his choosing. He chose the WWE Universal title. Meanwhile, Daniel Bryan had his own pursuit of the title. At the “Fastlane” pay-per-view, Reigns and Bryan had a match with Edge being the special guest enforcer. Reigns would win the match after Edge attacked both of them with a steel chair. WWE official Adam Pearce would later declare that the WrestleMania match would be a triple-threat one between the three men.

Who should win: Edge.
This will be 10 years to the day in which Edge gave his emotional retirement speech on “Raw.” It was crazy to imagine he’d ever return to the ring. But now that he’s back, it’d be amazing to see him with one final run as champion.

Who will win: Edge.