The women of the WWE put on an incredible show on Sunday at WWE Evolution, the first all-female WWE PPV in history.

That was despite a pretty limp/fumbled/vacant build in the weeks leading up to the historic event, where much screen time was instead devoted to the much-more controversial WWE Crown Jewel in Saudi Arabia. 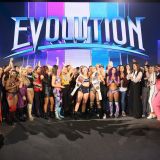 It wasn’t too different yesterday, where despite there being some fallout and mopping up from Evolution, all roads were pointing to Saudi Arabia for much of the night.

Read on for six things we learned from Monday Night Raw.

1. John Cena is OUT of the WWE World Cup at WWE Crown Jewel in Saudi Arabia and Bobby Lashley is IN.

The rumours, it seems, were true once more… at least partially

There had been whispers that John Cena and Daniel Bryan were two wrestlers who were choosing not to travel to Saudi Arabia for WWE Crown Jewel.

Daniel Bryan is seemingly putting all that aside and is still booked to face AJ Styles for the WWE Championship (but we’ll see what happens tomorrow).

Cena was of course the first confirmed entrant in the first ever WWE World Cup, and now he’s out.

Whether it was a crisis of conscience combined with the fact that he’s one of the few men with enough sway to do as he pleases without consequence, or an eye on his Hollywood persona, we can’t be sure, but he definitely won’t be in Saudi Arabia.

It was easy in the end to explain away his absence: Cena was the only man who hadn’t actually won a qualifier, so Acting General Manager Baron Corbin had a pretext to replace him.

Finn Bálor technically beat Bobby Lashley by DQ last night, but in pummelling the fan favourite, Lashley caught the eye of Corbin, who rewarded the recently-turned ex-MMA star with Cena’s spot in Saudi.

2. Brock Lesnar swings by to Monday Night Raw for a rare appearance

Not that he needed a (new) reason to reward Finn Bálor’s tormentor, but Corbin had one anyway.

Bálor had given a cheeky Too Sweet before his match with Lashley after Corbin had eaten a trio of Running Powerslams from Braun Strowman.

As for what BC did to deserve that, he tried to separate Strowman from the lesser-spotted Brock Lesnar.

Brock and Paul Heyman had popped by a few days before the Beast’s match with Strowman for the now-vacant WWE Universal Championship.

After Heyman’s usual spiel guaranteeing a Brock Lesnar victory, Corbin got himself involved and paid the price.

But in focusing on Corbin, Strowman took his eye off the prize, and ended up taking an F-5 from the former champ for his troubles.

3. It’s Ronda Rousey vs Becky Lynch in a Champion vs Champion match at Survivor Series

As the official WWE accounts continue to fluff Ronda Rousey (not without good reason tbf), Becky is reminding people that her championship is every bit the equal (if not superior) to that held by the Rowdy One.

If you couldn’t see where this one was going, well, it was made official last night.

After establishing her dominance over the WWE SmackDown Live Women’s Division, it makes perfect sense for Becky to look over to Monday Night for her next challenger, and the beauty of crossbrand pay-per-views makes it possible.

There are shades of AJ vs Brock here, but we think that the SDLive Women’s Champ can go one better than the Phenomenal One and actually get the W over the former UFC titleholder.

Either way, after the Feud of the Year, Becky has an opportunity now to put on what could well be the best one-off match of 2018.

Oh, and no rest for the Rowdy: Nia Jax is waiting in the wings for Ronda after her Battle Royal win on Sunday and beat Ember Moon once more to show why she’s a very real threat.

4. Why Dean, Why? Seth Rollins is asking but Dean Ambrose isn’t telling

In some ways, Dean Ambrose’s betrayal last week was even more upsetting than Seth Rollins’s own backstabbing four years ago that first split up The Shield.

Yes, we hadn’t entirely bought in to The Shield Mk II, but but we were certainly beginning to before those two bombshells hit us last week.

Firstly, that heartbreaking announcement of a leave of absence for Roman Reigns, who’ll be away from the WWE until he beats leukaemia once more.

Then there was that Dirty Deeds, followed by a beatdown, and another Dirty Deeds on the concrete, just moments after Seth and Dean had won the Raw tag belts in Roman’s honour.

While accepting his own misdeeds perhaps sewed the seeds of this later betrayal Seth came out and demanded answers from Dean.

After all, when he sold out his brothers to buy in to Evolution and Triple H, he at least had the courtesy to explain exactly why the following week.

But despite visibly bristling whenever he was described as a Lunatic, Dean Ambrose ain’t telling yet.

This one has a long way to go yet.

5. The Undertaker and Kane and Triple H and Shawn Michaels are possibly trying TOO hard before WWE Crown Jewel

Before WrestleMania 31, The Undertaker didn’t appear ONCE before his match with Bray Wyatt.

It was a one-man build and yet, it worked. Bray did the heavy lifting and although he wasn’t rewarded with a victory, he did a sterling job on getting us there.

Before WrestleMania 34, Taker again was conspicuous by his absence, as John Cena did all the talking.

Yet again the Deadman Cameth to layeth the smacketh downeth when it actually came to it on the night.

But after his defeat to The Game in Australia, The Undertaker has been an almost ever-present on WWETV to build excitement for this tag match.

And so have Triple H, Kane and just-out-of-retirement Shawn Michaels.

The segments are doing their job and reminding us what the biggest attraction is in Saudi Arabia, but it’s easy to feel as though they’re trying a little bit too hard to build this one.

The centre of this match is surely HBK’s unexpected un-retirement, but with all the other layers on this that key element is getting lost.

For those putting aside their qualms and tuning in to Crown Jewel, there’ll be hopes that the match itself makes a bigger deal of that angle.

After picking up a tag-team win over Alicia Fox and Mickie James at WWE Evolution, Trish Stratus and Lita got another W in a ten-woman match alongside Sasha Banks, Bayley and Natalya.

They beat a team made up of The Riott Squad, Mickie and Alicia as both sets of good guys rubber stamped the weekend’s results.

WWE Evolution was a massive success despite its build on WWETV, not because of it.

And in bundling ten women from two matches into a mop-it-up-match on the fallout show, there’s a real worry that the WWE will drop the ball once more when it comes to the women on Monday and Tuesday nights.

It’d be great if Trish and Lita were sticking around for a while, having singles and tag matches with and against each other.

But even if both women are happy to stay part time, there are eight other women who were in last night’s match who deserve stories and angles and challenges of their own, with real heft and meaning.

Sasha and Bayley are together for now, but need to actually have a target, be it the Raw Women’s Championship, a cross-brand tag belt, or just a juicy feud.

And the Riott Squad either need to win win win, or split split split, as staying together forever in defeat isn’t doing them any favours.

Yes, Nia (and Tamina, and maybe Ember Moon) have a road to the title, but even if they’re not challenging for the big one, all the women on that roster need, deserve and have earned a right to significant screentime and stories that matter.

What did you think of Monday Night Raw? Let us know at @digitalspywwe.