Why Are Darth Vader's Eyes Visible At The End of 'Star Wars: The Clone Wars'?

It’s been over a month since the finale of Star Wars: The Clone Wars premiered and there’s still a lot to process. While fans knew what they were getting into and knew it wasn’t going to be a fun or happy ending, seeing Order 66 from Ahsoka and Rex’s point of view was still tough. And to also see the conversations Ahsoka had with Anakin before he went off to save Chancellor Palpatine? And that she meant to talk to him again before he turned to the Dark Side? Yeah, fans are still hurting a bit.

And a new interview with Dave Filoni also sheds a little light on a small moment from the finale that revolves around Darth Vader’s surprise cameo. 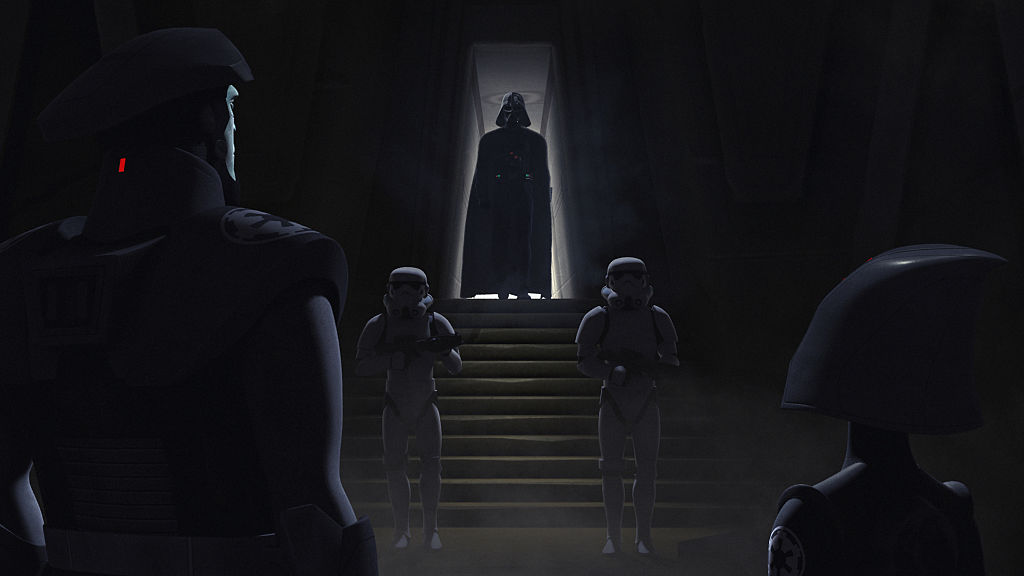 RELATED: It Was Important That Ahsoka Didn’t Kill Any Clones During Order 66 in ‘Star Wars: The Clone Wars,’ According To Dave Filoni

After Ahsoka and Captain Rex crash-landed the ship they were on, after the clones attacked them, there were no survivors. They created a makeshift grave for the lost Clone troopers and Ahsoka left the last lightsaber she had at the gravesite.

In the Ahsoka novel, it’s a grave to show she and Rex also perished at the site, to ward off anyone from the Empire. But, it’s also a symbol that this part of her life is over. There’s nothing left for her as a Jedi, since the Jedi Order is dead too.

And, lo and behold, Darth Vader did show up. He was probably specifically looking for Ahsoka, but it’s not confirmed in the show. Vader did a lot of Sidious’ grunt work in finding any rebels or remaining Jedi after the fall of the Republic, along with the Inquisitors. So it wasn’t out of the ordinary for him to be at a site like this. However, it felt personal.

Regardless of how his presence at the crash site came to be, it was still a very heavy scene. Because through his mask, audiences can see Anakin’s eyes beneath it. And even though they’re probably not Skywalker blue, in favor of Sith yellow, there’s a familiarity there. It makes the moment 100 times more sad.

In an interview with Nerdist on June 10, Filoni said that it was a small callback to A New Hope, where you can kind of see his eyes there too.

“I was always fascinated as a kid how you could kind of see somebody in there through the red lenses. It’s just really interesting to take this person who seems so lacking of humanity and realize there’s a person in there.”

His eyes link back to Anakin’s humanity

Going off of that, it was a way to really ground the audience and let them know that this man-machine is still a man. Or at least that there’s a man inside it. And Filoni, who was Supervising Director and an executive producer on the show, said that was a goal for The Clone Wars too.

“I think it’s more about the humanity that’s inside the armor and connecting that that was her mentor, her brother, and that he’s picked the weapon back up.”

This was also a tactic so that, even if someone didn’t know Darth Vader’s story, that humanity was felt.

“Taking it from the point of view of somebody that’s never interacted with the show before, this young man you see at the beginning of this four-part arc, who is the older brother, who’s the hero who gives her this lightsaber,” he said. “You have to connect, if you have no idea who Darth Vader is, that the dark-clad knight at the end of the episode is that young man.”

Again, even though Darth Vader is devoid of compassion and positive emotions — much different than Anakin Skywalker — you can still feel a bit of anguish when he picks up Ahsoka’s lightsaber. The one that, last he touched it, he was gifting back to her in hopes that she’d rejoin the Jedi Order.

The scene is also a stark reminder that Maul was right, and Ahsoka was blinded by her bond with Anakin

And tying it back to Ahsoka Tano, his former Padawan, this entire scene also brought back the memory of her duel with Maul. He told her that Anakin was Darth Sidious’ key to everything and he’d turn to the Dark Side. She was so sure of her former master that she fought Maul instead of joining him to take down Sidious.

While it’s not alright to fault Ahsoka with Anakin’s turn — there were so many contributing factors — seeing the former eyes of Anakin Skywalker really just emphasized the fact that Maul was right.

“It connects some things that are chilling because then you realize that all the things that Maul said were true, that Ahsoka’s lack of ability to accept that points to how she’s still flawed. She has things she needs to overcome,” Filoni said. “That there are no simple answers. And so I had to draw these parallels and one of them was I needed you to see humanity within that dark armor.”

This is, of course, a tactic used in Star Wars Rebels as well, when Ahsoka slashes Vader’s mask. This is 15 years later and she still won’t let herself believe her former master is Darth Vader. But cutting that mask showed her that it was him and also made his personal humanity come to for a moment.

Of course, Vader squashed it back down, but still. For a split second, Anakin Skywalker was back. It’s wild what a pair of eyes can do for the emotional impact in a scene.

RELATED: ‘Star Wars’: Dave Filoni Reveals How He Really Feels About ‘Chasing What Fans Are Going to Like’