Who is Tokie on Black Ink Crew: Body painter hired as the new receptionist but she really wants to do tattoos 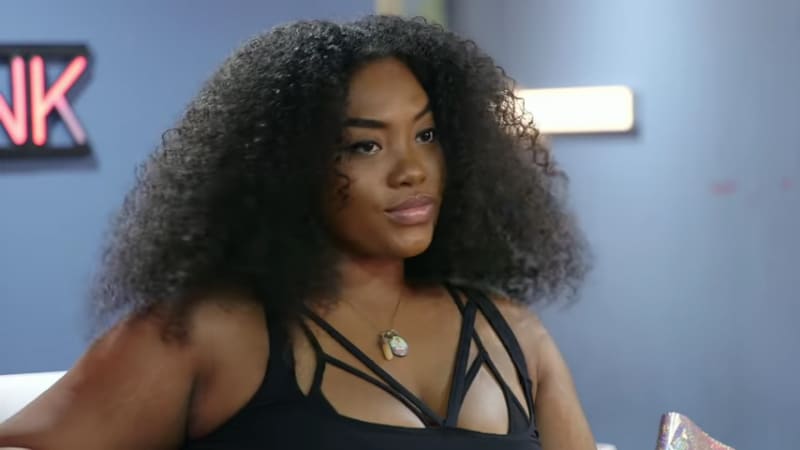 Tokie is the new girl on Black Ink Crew and on the next episode, she’ll have to prove to Ceaser that she’s worth hiring. It all starts when Bae tries to surprise Ceaser by helping to replace Jadah, who’s been fired. But will Bae’s plan backfire or is Tokie just what the shop needs?

When Tokie popped out of the box, Ceaser thought at first that she’d ordered him a mail order bride. When the Black Ink boss realized that she was just trying to get a new body employed in the shop, he was skeptical.

When Tokie was challenged with proving herself by painting a woman’s torso, she gave her what she wanted — a Japanese-inspired koi that wrapped around her right breast with a water and lily pad theme going on across her body.

The whole moment while Tokie was painting was very intense as she narrated a story about her sexual assault at just 14 years old. She explained how art became her escape and that it was a sacred thing that no one could take from her.

Ceaser thought the whole thing was whack and he said as much. Melody also weighed in, commenting that Tokie could have used better placement in order to compliment the woman’s curves.

Overall, the harsh criticism of Tokie’s body paint sent the new artist straight to the back in tears. Bae followed her and suggested that Tokie toughen up and come back again tomorrow if she really wanted to work at Black Ink and that’s exactly what she did.

The next day, Tokie confronted Ceaser and apologized for not impressing him and for getting emotional about it. She made it clear that she really wanted that receptionist spot though, and that she would work as hard as she had to in order to prove it.

Ceaser was impressed with that and hired Tokie to be the new receptionist, something that wouldn’t go over well with Jadah, who still thinks the spot is hers to win back.

When Ceaser announces that Tokie is the new receptionist, the rest of the crew seemed skeptical and they had ever right considering how many people they’ve already been through in that position.

Jadah found out about Tokie being hired too when she showed up to party at Black Ink. The women ended up facing off and Tokie stood her ground as the new receptionist.

Donna took Jadah’s side and claimed that she was family and shouldn’t be replaced. But Ceaser doubled down and made it clear — Jadah is fired and Tokie is hired. So now we have Tokie joining Black Ink Crew as the newest receptionist to try and navigate the drama of the shop.

It turns out that there’s even more to Tokie than we saw on her Black Ink Crew debut. She can be followed on Twitter and Instagram to see more about Tokie’s life and to see some very impressive artwork. She paints on people and canvas and it’s safe to say that Tokie is a talented lady!

She also creates digital art and has even said that she’s open right now for digital commissions, meaning that if you want a piece of Tokie’s art, that’s totally possible.

As far as Tokie’s love life, it looks like she won’t be trying fight anyone for Teddy’s affection because she’s already got a man. On Instagram, Tokie posted a video of herself and her man (who happens to be wearing bunny ears) and commented on how she misses him when he’s on tour.

I swear when he’s on tour it’s the hardest part. Hurry back funky ass nigga @mononeon I love u ??????? #MonoNeon

Tokie’s man goes by the name MonoNeon on Instagram but his real name is Dwayne Thomas Jr. and he’s a very well known bassist. In fact, he’s one of the last people known to work with Prince before he died.  Check out MonoNeon below: