In episode four of Clarkson’s Farm on Amazon, Jeremy Clarkson had the vision to create a pond and wetland to attract more animals, insects and species onto his land. Before he could get the digging underway, he had to have the field and stream assessed to see if there were any endangered animals’ habitats there. Once that hurdle was out of the way, he set about like a child in a sweet shop digging up metres and metres of soil. And he was pleased with his work until his girlfriend Lisa Hogan turned up and started shouting at him for all the mess he had made.

“Without insects, all life on earth ends everything and that’s me talking, not some young hairy armpit environmentalist on a rally, it’s me,” Jeremy began. “Sadly farming  is seen by many as one of the main reasons for this insect decline.

“Everywhere where insects like to live, is disappearing and I’ve decided to do something about that,” he continued.

“My plan is to make my hedgerows, my valleys woods and my streets, more attractive to creepy crawlies. 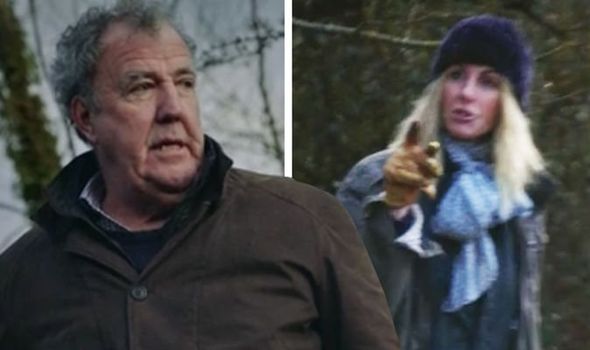 “In essence I am going to leave chunks of the farm completely alone, I’m going to put Mother Nature in the driving seat – it’s a process called Wilding – and I’m going to begin in a rather boggy and sad place at the bottom of a valley, which I want to look eventually like this,” Jeremy said holding up an animated image.

“But maybe the stalks are a bit ambitious. But everything else that’s what I’m aiming for.”

He then told viewers: “Obviously before I could start work on my wetlands project there were government rules to consider so I had to employ a team of experts.”

Jeremy was informed there was a mammal, most likely a water vole that was scurrying across his land due to droppings they had found.

“It is very unlikely to be a water vole… there were eight million 20 years ago, there’s now 220,000 and they mostly live in Glasgow,” he told the expert.

But the expert argued the animal was also in the Cotswolds and while Jeremy tried to convince him they could just dig the whole area and move it, keeping the water voles home intact, Amazon Prime viewers saw the expert dissuade him by mentioning a prison sentence and fine.

In the end, Jeremy suggested setting some trap cameras to find out what really was on his land and a few days later, the camera footage showed a shrew. 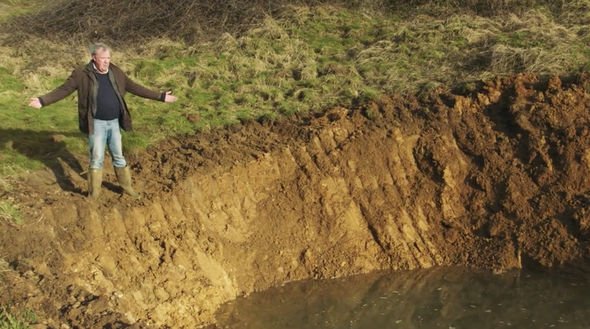 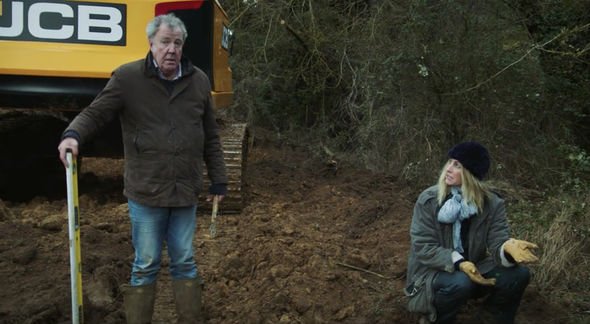 Jeremy and his wilding plan was back in business and drove a digger down to the site, but the steep hill combined with wet weather saw him slide down the hill.

“I’ve slithered down the steep bit and got to the bottom!” He exclaimed. “Look at the ecological work I’m doing here, on my way to create, what I like to call a biological supermarket, full of many different species.”

The new farmer was on a mission to find blue clay which would hold the ponds water and line the sides and when he found it, he had dug 10 feet deep.

By then it was lunchtime and when he returned, nature had thrown “one of its curveballs”, the pond had already begun filling up with water, which he had to pump out to carry on.

To make use of the digger, Jeremy decided to start digging another pond. 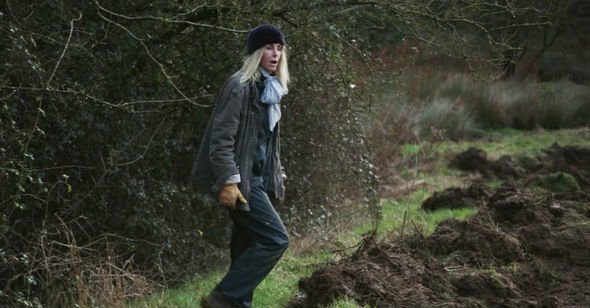 “Let me talk you through my plan, we’ve got a couple of springs a hundred metres up there and they’ve created this stream. So I’m thinking of damming it and then as the water level rises against my dam, it will fill this [newly dug area] because if you slow the water down you’ve got more chance for otters and herons and insects to come and live in it.”

When Lisa arrived, Jeremy “suspected [she] would be thrilled by [his] achievements”.

“Jeremy, what is this? Why are we building down there? What is going on here?” His girlfriend questioned and he replied: “Come and look and I’ll show you, I’ll show you how brilliant it is.”

“F*** sake,” Lisa muttered and Jeremy continued: “That piece of string is the dam -“

But he was cut off: “What? Sorry where is our pond, this is not what we discussed.” Lisa remarked.

“The pond is there, it’s already a pond but it shouldn’t be just yet,” the presenter said. “So I can’t work on that so I’m working on this wetland area.”

“I have no idea what this means,” Lisa continued to rant and walked away: “What the f*** are you doing up here?”

“Holy s*** Jeremy! What are you gonna do with all this soil? Nothing’s going to come and live here!” She exclaimed.

“That’s not good enough for you, that mess you’ve done there, and you had to do another mess, what was wrong with that mess?” Lisa wondered.

Jeremy had enough and walked away: “Why does everyone shout at me all the time?  I get up in the morning and people shout at me. Kaleb shouts at me, Charlie shouts at me…”

Clarkson’s Farm is available to stream on Amazon Prime now.