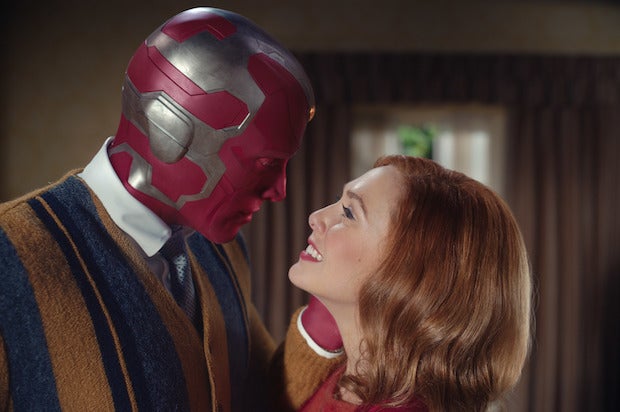 “WandaVision” debuts in less than a week on Disney+, marking the first new Marvel Studios project to be released in more than a year. And lucky for all you Marvel Cinematic Universe fans, the first reactions from those who have seen Episodes 1-3 of the Elizabeth Olsen and Paul Bettany-led show are very positive.

“Really have to hand it to the MCU – they just keep delivering the unexpected,” writer and producer Ben Mekler tweeted Saturday morning when the social-media embargo on reactions had lifted. “From Paul Bettany as a bumbling Dick Van Dyke surrogate to a startlingly lifelike CG Lucille Ball in Mark IV Iron Man armor #WandaVision is a courageously out-there entry that deserves the utmost praise.”

“WandaVision” reunites Olsen and Bettany as their Marvel Cinematic Universe characters, Wanda Maximoff and Vision, and finds the two living an idyllic suburban life in Westview. Of course, nothing is what it seems, mostly because Vision is still very much dead following “Avengers: Infinity War” and “Avengers: Endgame.”

ComicBook.com’s Brandon Davis tweeted Saturday that the show is “truly unlike anything the MCU has put out before,” adding: “I can’t emphasize that enough. It is a blast to watch. It is so committed to the sitcom structure of story telling that it feels like a bold risk – but it pays off and builds a mystery. It is awesome.”

“Watched 3 episodes of #WandaVision and the show is weird as hell (in a good way),” Geeks of Color owner Dorian Parks tweeted. “Two things are clear. 1) Marvel is dedicated to parodying classic sitcoms and 2) the MCU is finally back!”