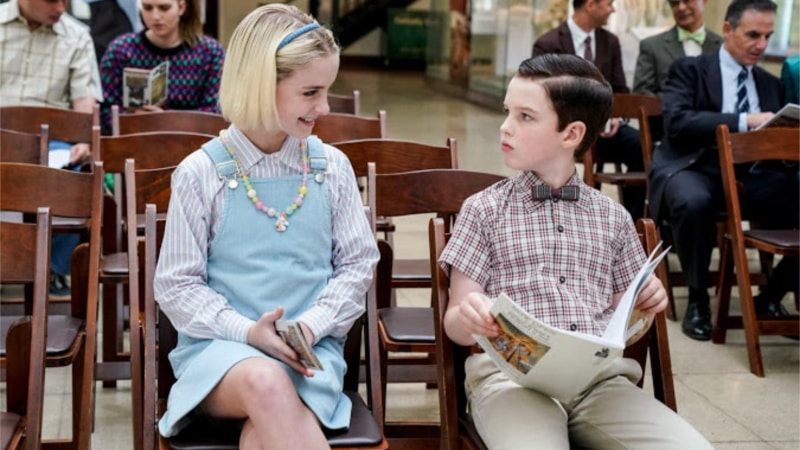 Wallace Shawn and Mckenna Grace are both returning to Young Sheldon tonight for the episode titled Carbon Dating and a Stuffed Raccoon.

During a trip to the science museum, Sheldon gets into trouble with the fellow young genius Paige, played by Mckenna Grace. Paige’s storyline will also deal with her bickering parents on this episode. She was introduced on the episode entitled A Rival Prodigy and Sir Isaac Neutron.

In addition to Grace, viewers will also see Wallace Shawn once again as he plays Dr. John Sturgis. Shawn has been on the show for a total of six episodes this season so far, and he’s becoming a rather frequent character on Young Sheldon. You can see a preview for tonight’s episode below.

Wallace Shawn has been in the industry for a long time. He may best be known for his roles in The Princess Bride, My Dinner with Andrew, The Incredibles, Toy Story, and Clueless. He has 192 credits to his resume as an actor and he has more projects coming out in 2019.

She’s best known for her roles on Instant Mom, Crash & Bernstein, Clarence, The Vampire Diaries, CSI: Crime Scene Investigation, The Young and The Restless, Gifted, Once Upon a Time, Amityville: The Awakening, Fuller House, Ready Player One, Designated Survivor, and The Haunting of Hill House.

Mckenna also has roles in upcoming films, such as Captain Marvel, Troupe Zeo, and the currently untitled Annabelle project, all due out in 2019. Despite her age, she is active on social media, including Instagram where she promoted her appearance on Young Sheldon.