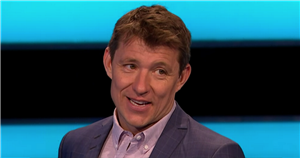 Tipping Point viewers were shocked after a sausage-related question resulted in a seemingly awkward quip from TV host Ben Shephard.

In the final round with contestant Chris, Ben quizzed the final contestant on what type of food a 'currywurst' is.

With salad, sausage or soup to choose from, Chris was adamant that it was a sausage, but started to doubt himself – when he chose his answer correctly, he cheered and Ben joined in the support.

The host immediately quipped: "If in doubt, follow the sausage."

Meanwhile, another said: "If in doubt, follow the sausage WTAF?"

A third person chirped: "That was the wurst question ever![sic]"

Other users were simply laughing at Ben's quick response to the food-related question – but it certainly took viewers by surprise.

Chris was able to make the most of his correct answer and sail through to the end of the round with £2,300 – and as usual, he was asked if he wanted to take the money or make a play for the £10,000 still for grabs.

The contestant chose to take the money, but he still had to attempt it to see if he could have won the money.

In an unfortunate turn of events, it looks like Chris could have been heading home £10,000 richer, as the star fell into play – but as Chris had declined the money, he couldn't keep it.

Chris remained a good spot, responding: "Ce la vie," translating to such is life – and recalled that he would still be able to put the money towards a new pair of boots, a holiday, and towards a new camera.

This evening's show saw Rachael, Nicola and Stu all take part to win the £10,000 jackpot prize.

Rachael left the game first after failing to get any cash out of the machine, while Nicola was forced to say goodbye in the second round.

Heading into the final round was a close call, with both Stu and Chris hitting almost the same amount of cash until Chris steamed ahead with one final question.

Ultimately, Chris powered through to the end and won a cash prize of £2,300.

Tipping Point will return on Monday on ITV at 4pm.