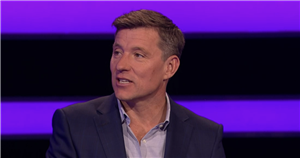 Tipping Point fans were left fuming on Friday afternoon as the hit ITV quiz show returned, with presenter Ben Shephard at the helm.

Abi, Ali, Elizabeth and Dave were the four players stepping up to their respective podiums in an attempt to secure as many counters as possible from the Tipping Point machine.

But as each contestant stepped up to the plate to answer a round of quick-fire questions, fans on their sofas couldn't help but pinpoint a frustrating habit Ben had of repeating certain questions.

If a contestant cuts across Ben's questioning to answer the question to reserve time within the limits, he tends to repeat the full question at the end, so that viewers at home know what was being asked to test their own knowledge.

"Finishes reading the question after the klaxon and repeats question that nobody cares about klaxon! #TippingPoint," someone else echoed.

Another simply posted a cheeky GIF of Ben with the words: "Repeat question klaxon!" emblazoned in blue WordArt.

In the end, it was Dave who soared through to the final round, after beating off all his competition.

He also scooped a mystery counter which won him a baking mixer – and joked on Twitter that it would score him even more television success.

He joked: "I'm using it to go for Bake Off and get a cake stand and a slot on Saturday Kitchen!"

At one point, Dave's performance was so impressive fans of the show were begging producers to "cancel" the quiz programme, as it was a foregone conclusion.

One fan tweeted: "This should just be a 30 minute show today," as someone else agreed: "Cancel the rest of the round and the next one too!"

"The other two players might as well just leave!" another chirped.

While a fourth fan wrote: "The other two contestants should just walk out!"

"I forgot the others were there!" someone else quipped.