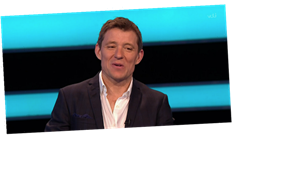 The 46-year-old presenter welcomed four contestants to the famous ITV studio as they battled it out to win the highly sought after cash prizes.

Alex, Sharon, Bob and Lisa answered a series of questions to win turns on an arcade-style machine.

Dropping tokens down a choice of four chutes, they each hoped to knock piles of the counters off a moving shelve – the more they collected, the greater the prize fund.

Good Morning Britain star Ben tried to impress the players in the studio with his accent skills during the throwback edition of the ITV quiz show, but his attempt didn't go down well with viewers watching at home.

Taking to Twitter, one fan penned: "Never do a New Jersey accent ever again @benshephard!"

Another added: "Never do that accent again, Ben. Please."

During the tense third round of the game show, Ben asked contestant Bob: "Which is the only US state whose name contains the letter J?"

The player replied: "I'l play this one I think. New Jersey."

Ben replied: You're going with New Jersey" before asking Alex: "What would have you said?"

"I would have said that too," the contestant replied.

"You would have gone there too. Let's finds out Bob. We could do with this counter. Is it New Jersey?," Ben added.

Ben attempted an American accent the second time when he said "New Jersey".

Despite answering the question correctly, Bob failed to make it though to the final round.

Alex tried his luck against the machine in the final and answered a series of tough general knowledge questions in a bid to win £10,000.

The contestant managed to win the special star coin which meant that he had won the whole prize fund.

A delighted Alex told Ben that that he was going to spend his money on a trip to Disneyland as well as renovation on his home.