Holly Willoughby has been notoriously jumpy when faced with terrifying things on This Morning in the past.

So what better way to send her off on her last show before presenting I’m a Celebrity than giving her her own Bushtucker Trial to scare the living daylights out of her?

Well the show did just that at the end of today’s (October 18) episode ahead of her departure, as Holly admitted: “I don’t think I can do this, I think I’m going to cry.” 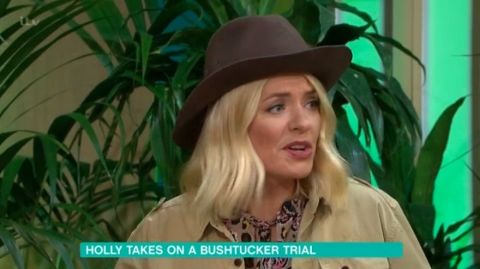 The presenter was given three large boxes which she had to place her hands in, and proved hilariously squeamish as the audience was shown just what she was touching.

Unbeknownst to Holly, they were all harmless things – the first box contained a remote controlled spider toy, for example.

She felt something furry in the second box, a terrified Holly asking whether they were rats – only for them to be revealed as harmless little kittens. Naturally, Holly breathed a sigh of relief.

However, the biggest surprise was in the third box, as it was revealed she was touching last year’s winner Georgia ‘Toff’ Toffolo.

“I’m going to miss you all so so much,” Holly admitted at the end of the programme. “I will be back very soon.”

Meanwhile, earlier this week it was revealed that Rochelle Humes would replace Holly on the show while she hosted I’m a Celebrity.

I’m a Celebrity returns to ITV soon, while This Morning airs weekdays at 10.30am.