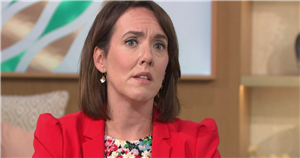 This Morning viewers were not best pleased with royal reporter Camilla Tominey on Monday, as she shared her views on Prince Harry, Meghan Markle and their son Archie.

The Royal couple were heavily discussed over the weekend, after it was discovered that baby Archie will not have a royal title.

Journalist Camilla gave her honest opinions on this and appeared to agree that the young royal should not have a title. She also claimed that Harry and Meghan can't pick and choose to have certain royal benefits now they have left the UK.

Speaking candidly, Camilla said: "Following that Sandringham summit, there was the sense that you can't be half in and half out."

As the royal reporter continued, presenter Philip Schofield interrupted and asked whether Harry should have been able to keep his military titles.

Giving a huge sigh before she continued, Camilla said: "I think it's difficult to have a salami slice approach to it.

"It's like saying I decide I want to go freelance but I still want to be able to use some of my Telegraph associations over seas."

Camilla also claimed that Harry and Meghan are using their royal titles as leverage for their US fanbase which is "problematic".

But some viewers were annoyed that she seemed to take jabs at the royals and appeared to give a "biased" view while reporting.

Not happy with her approach, This Morning viewers took to Twitter to express their perspectives.

One viewer penned: "Surprise Surprise Camilla Tominey just had to have a dig at a toddler. Shame on you. Your dislike of Harry and Megan is so apparent."

"Camilla Tominey's face is all grimacy when she's talking about Harry & Meghan, then it completely changes to beaming talking about the rest of the Royals," another chimed.

While a fourth said: "Why do you keep bringing @CamillaTominey on to discuss Meghan and harry? the coverage is just vile. First child of colour been stopped of his birthright and Meghan said all this in the Orpah interview. Poison spreading royal reporting."

While others felt that it was all a bit too much royal coverage in general.

"Anyone else think we have too much Camilla Tominey and the Royals on #ThisMorning now?" A viewer questioned.

This Morning airs weekdays at 10am.