When A.J. Finn — the pen name of one Dan Mallory, whose own story would make for a hell of a book — published his debut novel “The Woman in the Window” in early 2018, the “Rear Window” ripoff became an instant bestseller. It was easy to see why, thanks to its blend of (quite literal) Hitchcockian thrills with the kind of snappy chills found in books from other hot authors like Paula Hawkins, Ruth Ware, and Gillian Flynn. Finn may have cribbed plenty, but he also created an indelible character in the agoraphobic Dr. Anna Fox. She hasn’t left her house in nearly a year, instead opting to wile her time away drinking wine, watching old movies, learning French, and chatting with a close-knit coterie of other mentally ill people online. Then: a murder (maybe) just across the street, one only Anna saw, one only Anna can solve.

Inevitably, the movie rights to Finn’s novel were snatched up and original studio Fox lined up an enviable array of talents behind (director Joe Wright, screenwriter Tracy Letts) and in front of the camera (Amy Adams, Julianne Moore, Gary Oldman, Anthony Mackie, Wyatt Russell, Brian Tyree Henry, and Jennifer Jason Leigh). Not so bad! But after bad test screenings necessitated some rewrites (care of Tony Gilroy) and pushed-back release dates, the pandemic further moved the film off the calendar. Finally, Fox sold the entire thing to Netflix.

Arriving on the streamer almost two years after it was originally slated to hit theaters, Wright’s “The Woman in the Window” isn’t cursed — that, at least, would be interesting — and is instead something far worse: boring. A stripped-down script does away with nearly every element that makes Anna (Adams) sympathetic or credible. Plus, there’s a bafflingly loose interest in her agoraphobia, a countdown conceit that flattens the tension, and a series of over-the-top characters who only exist to deliver bad exposition. More than thrills and chills were snipped from the story; we can only presume that basic coherency also wound up on the cutting-room floor.

The broad strokes are still in place: Anna is housebound (the film’s single setting, her messy Harlem rowhouse, is a beautiful piece of production design) and, despite her background in psychology (her specialty is kids, an element that becomes farcical as the film winds on, something the book managed to avoid), she doesn’t seem to be getting better. Weekly visits with her own shrink (Letts) feel more threatening than anything, but at least he encourages her habit of spying on her neighbors (curiosity about the world, he reasons, is a good thing in someone prone to suicidal thoughts) and gives her all the drugs she needs. She spends time by drinking wine and watching old movies — a fine holdover from Finn’s book — though her other activities and relationships have been mostly jettisoned from the threadbare script. 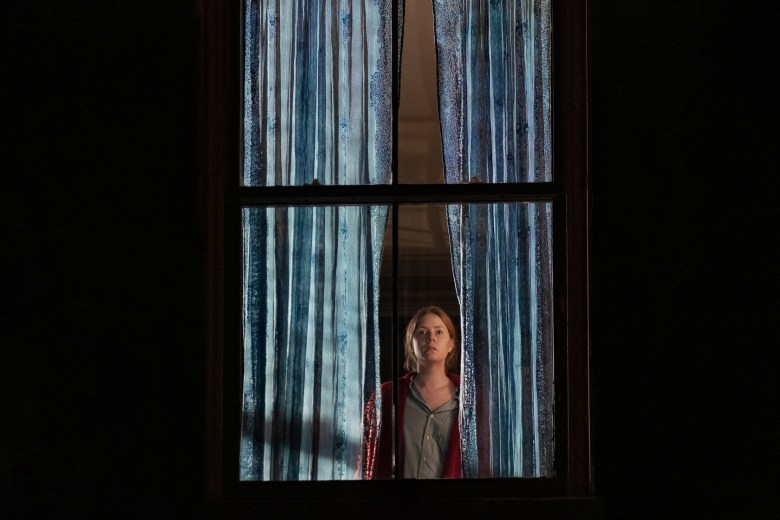 “The Woman in the Window”

One thing holds her together: talking to her estranged husband Ed (Mackie) and daughter Olivia (Mariah Bozeman) who are — well, they’re somewhere else, let’s leave it at that. When a new family moves in across the street, Anna’s attention is drawn immediately, probably because she’s bored but also because, like everyone else in “The Woman in the Window,” the Russell family needs to invest in more comprehensive window coverings ASAP.

There’s sensitive son Ethan (Fred Hechinger, quite good), tense father Alistair (Oldman, screaming a lot), and sassy mother Jane (Moore, who nails the sense that her character doesn’t quite fit the rest of the family). Ethan and Jane both visit Anna, who is so bleary-eyed with booze that she doesn’t quite remember all the details. Ethan is afraid of his father, and yes, Anna has totally met Jane. They drank wine together! Didn’t they?

When Anna sees Jane (or is she Jane?) murdered in cold blood in the Russell house, she immediately calls in the cops (including a stand-out Henry), but who can blame them for not totally believing this strange, drunk, lonely woman who hasn’t left her home in months? While Finn’s book toyed with the idea that Anna is both a worthy protagonist and an unreliable narrator, Wright’s film is too busy zipping through hammy exposition and loud acting to dig more deeply into her psyche.

Letts’ script excises small pieces of Anna’s strange life — an entire subplot about her online support group is gone, as is her kindhearted physical therapist Bina — but it also seems oddly disinterested in her primary problem: her agoraphobia. The trick of Finn’s story is that Anna, like many a “Rear Window”-esque hero before her, cannot leave her house. Wright’s film rarely engages with that key conceit, choosing to render Anna too drunk or too addled to do anything. Anna’s struggle to force herself outside during fraught moments provides much of the tension and emotion of the book; in the film, it’s a tossed-off worry, one of many.

“The Woman in the Window”

The reason for Anna’s agoraphobia is also handled in awkward ways, less a “twist” and more an excuse for Wright to offer Giallo-like flourishes — dripping blood, falling snow, and even a few split diopter shots. These are oddly deployed, but at least they hint at a weirder, wilder film lurking underneath. Perhaps Finn’s novel, one already rooted in cinematic grammar, is better suited for the stage. Kevin Thompson’s production design was built on a sound stage and yet it feels more vibrant and real than anything else in the film.

While the film’s acting runs the gamut between stilted and extreme, the rare moments when Wright brings his ensemble together crackle with the kind of nervy tension the rest of the film is missing. Mostly, though, there’s the baffling: the interiority of Finn’s novel works on the page, but blown out — and, really, blown apart — on the big screen, there’s no mystery left. It’s the cinematic equivalent of a window not worth opening. Pull the drapes closed, it’s curtains for this one.

Netflix will release “The Woman in the Window” on its streaming platform on Friday, May 14.