‘The Walking Dead’ Review: ‘Ghosts’ Kicks Season 10 Down A Notch

If you were hoping “The Walking Dead” would start revving the old storytelling engines after the table setting of this season’s first two episodes, I’m afraid you’ll have to keep waiting. There is some incremental progress made in the Whisperer storyline during “Ghosts”, but otherwise it’s a bunch of uninspired or redundant character work. No one would ever accuse “The Walking Dead” of being a fast-paced series, but I held some hope that after Season 9’s eventful run, Season 10 would shake things up a bit more. But if this year’s first three episodes are any indication, Season 9’s pacing was an aberration; we’re back to slowed-down business as usual.  And sadly, “Ghosts” is the weakest episode of Season 10 so far.

Man Is the True Monster

The main story this week concerns Carol, who responds to seeing Alpha again by going completely off the rails. She starts popping (presumably long-expired) pills like they’re Mentos and her behavior turns excessively erratic over the course of this episode. She nearly dooms everyone by shooting at Alpha during their meeting, and her drug abuse leads her to start having lengthy, realistic hallucinations, which prove to be neither scary nor disorienting. Once it’s established that this is a “nothing is what it seems” episode, the constant do-overs as Carol starts awake each time get tedious. It’s perfectly fine to focus on Carol’s grief over Henry, but there had to be a better way to do it.

Unfortunately, Carol’s dear friends Daryl and Michonne basically kick back and watch her unravel, even after she nearly sinks things with Alpha and starts imagining Whisperers in the woods. At one point, Daryl wonders if Carol wouldn’t have been better off on the boat and Michonne immediately counters that Carol belongs with them. The charitable explanation is that Carol was lying to herself about how she had moved past Henry’s death and this spiral would have happened sooner or later. The less charitable explanation is that the distance really did help Carol, and her friends are being huge jerkweeds by insisting she stick around. Either way, Daryl and Michonne are far too nonchalant about Carol’s behavior. She’s gobbling the pills right in front of you, guys, c’mon.

Eventually Carol almost get eaten by zombies, having been caught by a snare placed in the middle of a basketball court – a ridiculous trap that sadly is not a hallucination. The episode ends with the reveal that Carol did manage to shoot a real Whisperer, who we see turning. It’s possible that Alpha will discover this and use it as further reason to escalate her conflict with Alexandria, but in the context of this episode it’s extremely anti-climactic. 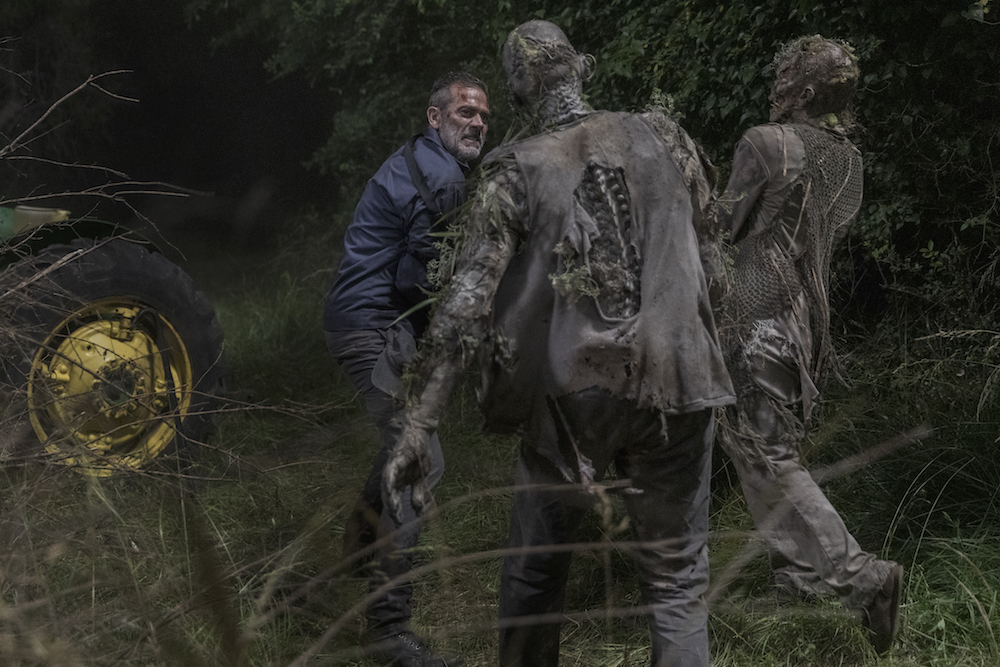 A Shred of Humanity

Somehow even more frustrating is this week’s Aaron/Negan story line, because it blows up what seems like a promising start. Gabriel insists that Negan help defend Alexandria against the incessant zombie herds that have appeared, and at first it looks like Negan’s cutting insight will finally burst Aaron’s new tiresome tough guy persona, but no, it just turns into yet another “Can Negan be trusted?” story.

Aaron gives Negan a hard time but winds up getting blinded by a weed growing out of a zombie’s body (okay, sure) and Negan takes care of him until he recovers. There are a few teases that Negan might turn on Aaron, but they have even less tension than Carol’s visions. Everything works out fine, and Aaron learns that Negan might really be changing for the better, a lesson everyone should have probably learned the first time he escaped.

There is one all-too-brief bright spot this episode. Dante immediately recognizes that Siddiq has PTSD and offers to help, revealing that he had similar feelings after his tour in Iraq. After seeming like a jerk in his previous appearance, Dante proves himself to be a more observant and caring friend than some people I could name, Daryl.