‘The Unicorn’: Natalie Zea To Recur On Season 2 Of CBS Comedy Series

EXCLUSIVE: CBS’ The Unicorn is extending the Justified reunion. Natalie Zea, who guest starred in the single-camera comedy series’ Season 1 finale, has been tapped to heavily recur during the show’s upcoming second season. 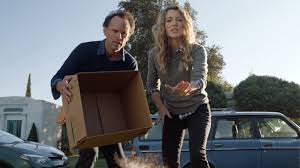 She will reprise her role as Shannon, the mystery woman Wade (Goggins) felt an instant connection with during a brief encounter at the end of last season. When he finally finds her again, he’s delighted to find that she’s every bit as smart and delightful and compassionate as he knew she’d be, but her life is much more complicated than he’d ever anticipated.

Goggins and Zea previously co-starred together on the FX drama series Justified.

Zea stars in the NBC drama pilot La Brea. She is one of two leads originally cast in the project whose options have been extended as the network is considering a straight-to-series order for the project. Zea will shoot The Unicorn, which is already in production, while awaiting word on La Brea.

Zea’s series credits also include The Detour, The Following, The Shield, and Dirty Sexy Money. She is repped by UTA, manager Robert Semon and attorney Jamie Feldman.