'The Office': Why There Is a Random Wizard in 'Dwight's Speech'

Some eagle-eyed fans were able to spot a person in a costume in the background of a scene of The Office. They finally got an answer to why there is a wizard in the episode, “Dwight’s Speech.” Find out about all the hard work that went into Dwight (Rainn Wilson)’s big scene and how the wizard made it into the episode.

Some mistakes were left in ‘The Office’ 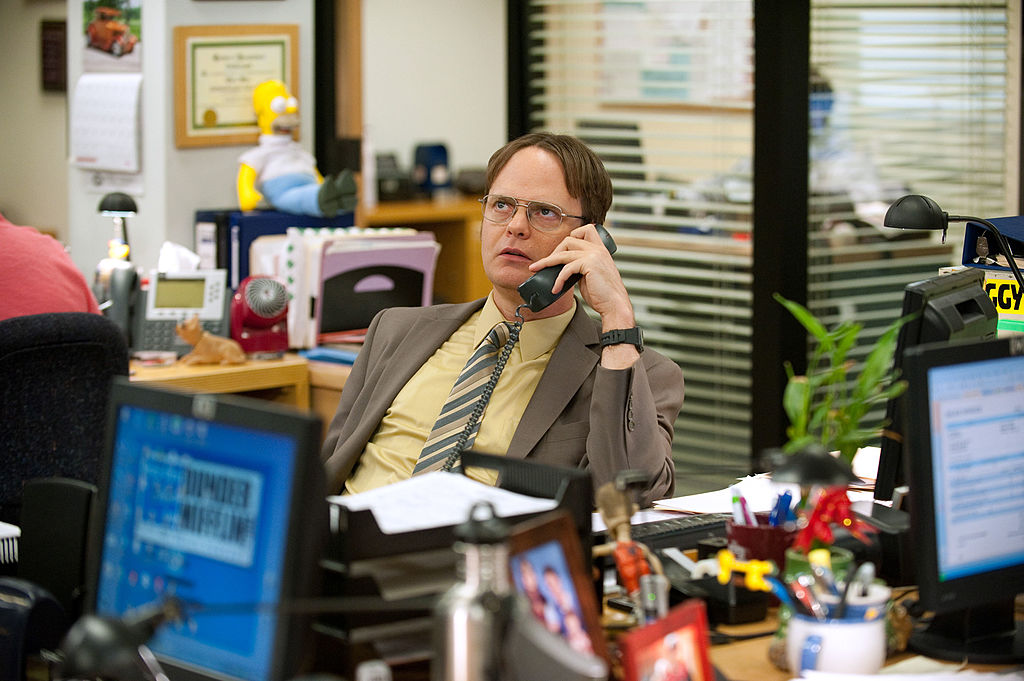 There is a lot of improvisation that made it into The Office. There were also a few mistakes that were included.

One mistake was the cold open of “Performance Review” where Dwight bounces on his fitness orb at his desk. He keeps talking to Jim (John Krasinski) about it and Jim finally has enough.

He gets a pair of scissors and pops it making Dwight fall to the floor. This wasn’t actually supposed to happen. The ball was supposed to slowly deflate, but they chose to keep the mistake in because it was so funny.

Dummies were used in ‘Dwight’s Speech’

“Dwight’s Speech” shows Dwight having to give a speech because he is awarded Salesman of the Year. Michael (Steve Carell) goes with him and tries to help him prepare for his big moment.

Jenna Fischer and Angela Kinsey talked about all the hard work that went into create the award scene on Office Ladies.

Fischer said that 400 extras helped make the episode along with 100 dummies. The actress said they were “Torsos with no arms and legs, dressed up in suits.” She said there were five dummy wranglers who carried them around the room for the shots.

This is the most extras they’ve ever had for the show. Chances are you won’t see any of the dummies because they were placed in the back of the room and on the sides.

There is a wizard in the background of a scene

This is what every sibling photo on Instagram looks like when you come home for the holidays. #TheOffice

Later Michael and Dwight are seen having a drink together at the bar. If you look in the background you can see one person dressed up in a costume complete with a mask. In the next cut, there is also a man dressed like a wizard. A fan asked the podcast hosts why the costumed people are in the show.

Kinsey pointed out that there is a deleted scene that explains this. One scene shows Michael and Dwight walking through the location and they accidentally find a place where there are many cosplayers. Dwight is upset because he would have attended the event.

There is another reason according to Fischer. She said the show made a deal with the hotel that they can shoot anywhere on the property. But the only room they were allowed to shut down was the ballroom. That meant other guests could walk around where they were filming and risk being caught in the show.

“There was an anime expo in one of the ballrooms so people dressed up,” said Fischer. So those are real people who went to that event.