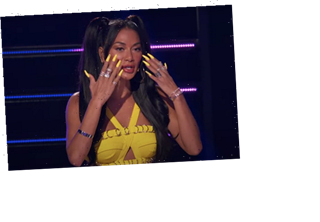 All of her loves all of him

We have it on good authority that “The Masked Singer” Season 5 contestant Robopine (f.k.a. Porcupine) uses his beautiful voice to bring judge Nicole Scherzinger to tears on Wednesday’s episode of the Fox singing competition. That good authority being TheWrap’s exclusive clip of Scherzinger reacting to the prickly competitor’s performance of John Legend’s “All of Me.”

In the video, which you can view above, Nicole stands next to fellow panelists Jenny McCarthy, Ken Jeong, Robin Thicke and guest judge Joel McHale as she describes Robopine’s effect on her.

“When you sang that song, everything else stopped. Tears were streaming,” she says. “And I have never been more compelled at any other performance on any other season, ever.”

OK, now it’s a real shame that we don’t have footage of the performance itself, because that sounds amazing. But “Masked Singer” fans will get to see it tonight when they tune in for the return of Robopine and the other Group A contestants, Seashell, Raccoon and Russian Dolls — plus the surprise addition of the show’s first “Wildcard” contestant.

Oh, and speaking of other competitors, Joel interjects after Nicole’s moving assessment of Robopine’s performance to say he’s “no Raccoon.”

“Everyone thinks he was looking at Nicole, but the red eye was definitely looking at me,” McHale joked.

Here’s the official description for Wednesday’s episode of “The Masked Singer”:

“The Masked Singer” airs Wednesdays at 8/7c on Fox.