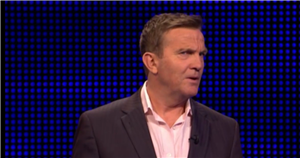 Bradley Walsh is known for bantering with his contestants on The Chase, and he had a field day on Thursday when he found out one of his players was a bald hairdresser.

At the start of the episode, the latest batch of four quiz-hopefuls – Daniel, Laura, Jane and Kevin – entered the ITV studio to try their luck against the notoriously smart Chasers.

But 61-year-old host Bradley was left baffled in front of the cameras after meeting his first contestant who rocked up to the panel to test his knowledge – 54-year-old Kevin from Norwich.

When Bradley introduced Kevin, who was clearly a bald man, Bradley asked him what he did for a living and Kevin revealed that he was in fact a hairdresser.

During the awkward on-air moment, presenter Bradley simply couldn't contain himself when Kevin told him he cuts people's hair every day despite him having little-to-no hair himself.

Bradley asked: "What do you do there [in Norwich]?" to which Kevin responded: "I'm a hairdresser."

Baffled Bradley then shot Kevin a dramatic stare of confusion which caused a long and awkward silence between the pair, with Kevin eventually grinning as he confessed: "I know, got no hair but doesn't matter," which prompted his team to giggle behind him.

Naturally, prankster Bradley couldn't resist pointing out the elephant in the room and immediately engaged in some typical banter with the poor player.

Bradley then said: "I mean… looks very neat," to which Kevin jokingly quipped: "Oh, well I wash it every day!", clearly seeing the funny side of Bradley's hair jibes.

Bradley shot back: "Look after it, it's great.", to which Kevin said: "Absolutely, you have to."

Sadly for poor Kevin, despite his impressive cash-builder round of £6,000, his luck didn't pick up during the game and he was faced with The Governess – Anne Hegerty – who successfully chased him down which led to Kevin being booted off of the show first.

However, despite beating him The Governess was impressed with Kevin's knowledge and she admitted: "He [Kevin] was obviously very smart".

After Kevin left the show, 63-year-old Jane – a retired education consultant – faced the same fate as Kevin and kicked off the show after being chased down.

However, 24-year-old English student Laura and 33-year-old customer support officer Daniel managed to take home £5,500 each after securing £11,000 in their final chase.

The Chase continues on weekdays at 5pm on ITV.