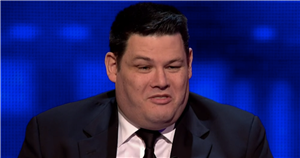 The Chase turned awkward on Tuesday afternoon as a contestant snubbed a high money offer from The Beast.

The cheeky presenter was eager to see them get through to the final with some money in-hand.

Mark Labbett aka The Beast was in the hot seat once again trying to prevent the hopefuls from going home with the cash prize.

Lucy, Kathryn, Fred and Alan all took it in turns to take on the Cash Builder and later went head-to-head with The Beast in an intense round of general knowledge questions.

Alan was the first contestant to try his luck on the show and he managed to answer four questions correctly in the first round.

Before he took on The Beast in the head-to-head offer, Alan was offered the chance to exchange his £4,000 for a higher or lower offer.

After consulting with his team maters, the contestant decided to play it safe and kept his £4,000.

Bradley said: "Four grand it is" before asking Mark his thoughts on Alan's decision.

The Beast replied: "It's not pick your own offers. You get what you're given."

Alan replied: "Awh right" before letting out a cheeky giggle.

The contestant managed to sail through to the final chase and he was later joined by his three team mates.

Alan, Fred, Kathryn and Lucy managed to get 20 steps ahead of The Beast in the tense final round.

With £16,000 on the line, the pressure was on for Mark to stop the team from going home with the goods.

The team managed outrun The Beast and each player went home with £4,000 each.

Viewers at home were delighted with the epic win and rushed to their keyboard to discuss the nail-biting showdown.

Taking to Twitter, one fan penned: "Never normally watch it, but oooh that was good!!"

A third person posted: "That was so close!!"

"Wow! What a final chase," said a fourth viewer.

The Chase airs weekdays on ITV at 5pm