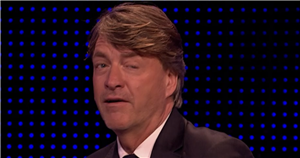 The Chase fans were fuming on Saturday when they realised that the celebrity special was yet another repeat.

But although the stellar line-up, fans weren't impressed by the rerun of the show.

One fan took to Twitter to say: "Not this repeat again #thechase."

Another then added: "We're watching the 80th repeat of the year #TheChase."

While a third tweeted: "You could watch a celeb edition of #TheChase in a few mins (A repeat where they don't win anything) OR you could put Channel 4 on #Grease."

While viewers at home fumed over the repeat, Bradley Walsh scolded Richard Madeley for ruining his singing moment.

The GMB anchor had to figure out how many days were in specific months – something he did rather quickly.

Singing the classic rhyme Thirty Days Hath September, Bradley might not have known all of the words but he gave it a good go.

And he also didn't want Richard to interrupt his performance either.

Richard tried to chime in while giving his answer to the question, but Bradley wasn't impressed and was quick to scold the news anchor.

"You're ruining my song," Bradley fumed, but Richard found his response quite funny and laughed it off.

Elsewhere in the show, all celebs made it through tot he final round bar Jenny Eclair.

Richard, Perry and Ore battled it out in the final round for a whopping £90k after Richard managed to bring in a huge £76,000.

The Governess prevailed though which meant the celebrities were unable to scoop the jackpot for their charities.

For more of the latest showbiz and TV news from the Daily Star, make sure you sign up for one of our newsletters here.