The 100 Series Finale: What That Ending Really Means

Showrunner Jason Rothenberg walked us through the meaning of The 100's bittersweet series finale, which aired Wednesday, Sept 30. 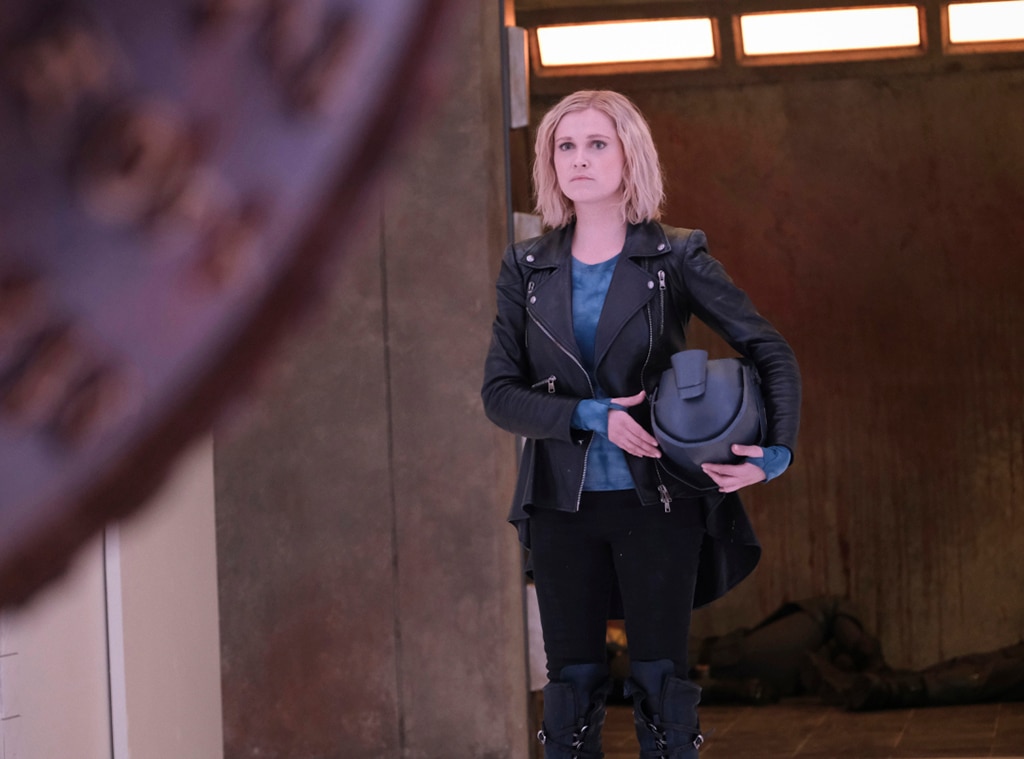 After seven seasons, The 100 has said goodbye.

Just as expected, it wasn't a happy ending, but it also wasn't quite as devastating as it could have been. It was sort of peaceful, actually, which is a pleasant change for this show.

Cadogan's "Last War" turned out to be, as Jordan thought, a test that would determine whether or not humanity deserved to transcend to another plane of consciousness or to just be completely exterminated. Cadogan was about to take the test (with his daughter Callie appearing as his judge) when Clarke arrived and killed him. She then took his place in the test, and the judge turned into Clarke's deceased love Lexa.

"Lexa" fairly quickly informed Clarke that if she was representing humanity, then humanity didn't deserve to live. She failed the test, and humans were doomed.

Then Raven took over, with her former mentor and parent-figure Abby appearing as her judge. "Abby" took her to where Wonkru was about to face off against the Disciples in a war that was only supposed to serve as a distraction but was about to turn into a real battle, thanks to Sheidheda.

But then Octavia put herself in the middle of the two sides and made a rousing speech about how they didn't need to fight, and that helped convince "Abby" that maybe humanity did deserve to transcend—just not all of humanity.

Everyone else turned into a ball of light while Clarke was left alone with Picasso the dog, preparing to live out the rest of her life completely by herself. But then "Lexa" reappeared to explain that she wasn't quite alone.

Apparently, transcension is a choice. Madi chose it because she knew that Clarke wouldn't want her to live without anyone her own age, but all of Clarke's other friends—Raven, Octavia, Murphy, Emori, Jackson, Miller, Jordan, Niylah, Levitt, Indra and Gaia—chose to stay behind with her. They wouldn't be able to have kids, but they would get to live out the rest of their lives together as the last humans.

We got the scoop from Jason Rothenberg about the finale's biggest moments and what it all might mean.

E! News: How would you sum up the moral of your story?

Rothenberg: I would say that until we are able to recognize that our enemies—actually ourselves—that we are all Wonkru, to use the term from the show, then we are doomed to repeat the violence and we're essentially just doomed period. Once we do realize that, then that is the key to transcendence in the show certainly, but I think it's the key for us as a species in the real world to eventually find out what comes next. I mean, we're so at each other's throats in so many ways.

The Biggest Bombshells from The Meaning of Mariah Carey

E!: It's not a happy ending but it's not necessarily a sad one either. How do you view the ending?

JR: I see it as bittersweet. Clarke wasn't allowed to transcend, like Moses not getting to go to the promised land. Only she finds her friends there, and that obviously is an emotional moment. She has her family, for the most part. Many of them have chosen to sacrifice transcendence to be with her because she sacrificed for them and because they love her, so I feel like the takeaway ultimately is emotionally positive. But everybody has given up a lot to be there by the end.

E!: What do you envision their lives like now?

JR: I feel like peace is what they will be able to finally experience. There's no one left to fight. I'm sure they'll probably get on each other's nerves eventually, but ultimately, I think they'll live out their days peacefully.

E!: It was sad to realize that in the end, all Bellamy wanted was to transcend and he got so close, but it didn't happen. Can Clarke ever forgive herself?

E!: How do you feel like Bellamy's death fits into the end of the story?

JR: Part of the tragedy of Bellamy's journey for sure is that he was right and he doesn't get to experience the thing that so changed him. I think we see that landing pretty hard on Octavia several moments in the episode. But I think it adds another level of sadness to the episode, another level of bittersweet—certainly the bitter part.

Bob had to take time off this season and so there was a lot of scrambling to tell his story. We had seven episodes broken, five episodes written. We were shooting the first episode when we found out that we needed to make space for him. And that really did have a domino effect downfield for the rest of the season so the ending changed significantly several times.

You want the decision to always come down to creative choices in the room where there's no outside elements that come into play, but unfortunately, you know, as writers, and that doesn't necessarily apply to Bellamy. Generally speaking, over the course of seven years or so lots of characters have died. It isn't always because it's exactly what we were always wanting to do. Sometimes an actor gets a job on another show or whatever the case may be. We have to roll with it, you know. That's the job.

E!: How did the ending come together? What was the overall vision?

JR: We definitely started towards this idea of really wanting message to be ultimately a positive one, I guess in a way. This notion that when we do put down our weapons, we can transcend. That began, if you think about it, with the "Do Better" speech from Monty at the end of season five. Ultimately that landed in a similar place of like, "You made a lot of mistakes but this is your chance to do better. Don't blow it." I didn't know, by the way, that that wasn't going to be the series finale when I wrote that. We were blessed to have these last few seasons, but ultimately, emotionally, moral of the story, that's where we were aiming for.

E!: What was the significance of bringing back Lexa and Abby? Was there anyone else you wanted to bring back?

JR: There weren't others that we wanted to bring back actually. Once we landed on the rules of the test where the judge appears before the witness in the form of the person they loved the most or is the greatest teacher or the greatest enemy—once we landed on that, then, it was pretty clear for obviously for Cadogan who it should be. And it was equally clear for Clarke that it should be Lexa, her greatest love. When I pitched that in the room, it was one of those like unanimous writers room moments, which was undeniable, and you're always looking for that when you pitch ideas in the room. For Raven, it's a little trickier, obviously, because Abby's not her mother, but the connection between the two of them was always so important to Raven clearly and allowed us to bring Abby back. If Alycia hadn't done it, I probably would've had it be Abby for Clark as well.

E!: Do you have a vision of what transcending is actually like?

JR: No, not really. I think it's one of those unknowable, find-out-when-you-get-there answers, like what happens when you die. I think it's essentially like our consciousness is energy and our energy is joining what we call the Universal Consciousness, the higher level of consciousness that we all get access to if we pass the test, so what that means exactly is open to interpretation. Some people might take a religious perspective and others might say it's what religion, generally speaking, is based on, to explain that phenomenon.

JR: It's been the pleasure of my life making the show. I'm so grateful to everybody who's watched the show and, you know, our fans are incredibly passionate and I respect them so much. It's been a blast to be a part of it. Just an honor to be a part of it to create something that actually affects people's lives.