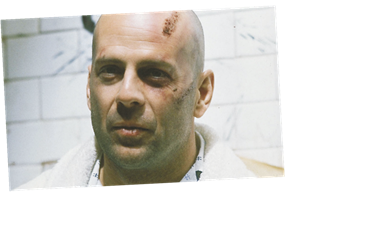 Terry Gilliam’s “12 Monkeys” is currently celebrating its 25th anniversary since it was released nationwide January 5, 1996. Inverse marked the occasion with an oral history that features Gilliam, screenwriters David Peoples and Janet Peoples, producer Charles Roven, and casting director Margery Simkin. It comes as no surprise that Gilliam makes a few hilarious off-the-cuff remarks while reflecting on his time travel movie, which was inspired by Chris Marker’s 1962 short film “La Jetée.”

“12 Monkeys” stars Bruce Willis as James Cole, a prisoner selected to take part in a time travel experiment in which he travels back and forth through history in an attempt to find a cure to a virus that wiped out mankind. Madeleine Stowe and Brad Pitt also star in “12 Monkeys,” but it was the casting of James Cole that proved most important for Gilliam.

“The pressure was to get a movie star in,” Gilliam said. “That was at a time when I was still a hot director, so people wanted to come near me and touch me. So they were coming up with all these names. And I just kept saying no. Tom Cruise, Nic Cage, they were all being thrown at me.”

Gilliam refused to consider the likes of Tom Cruise, but Bruce Willis wasn’t an instantly attractive choice for him, either. Gilliam admits to Inverse that Willis was never his favorite actor, particularly because of the look of the actor’s mouth.

“I had never been a great fan of Bruce’s before, but I liked talking to him, and I thought, ‘OK, this guy’s smart; he’s funny,’” the director said. “I explained to him my concerns about him as an actor. I hated the Trumpian mouth he does in films. Rectal. It’s like I’m looking at somebody’s asshole.”

Gilliam liked Willis enough after their meeting to cast him, but it turns out Pitt also wanted the role of James Cole. Pitt was instead cast as motor-mouthed mental patient Jeffrey Goines.

“Brad [Pitt] came to London, and we had dinner because he was keen to get on board to play the part that I had already given to Bruce,” Gilliam said. “I was actually scared shitless that Brad might not be able to do the character because up to then we’d never seen him as a motormouth.”

Head over to Inverse’s website to read the “12 Monkeys” oral history in its entirety.