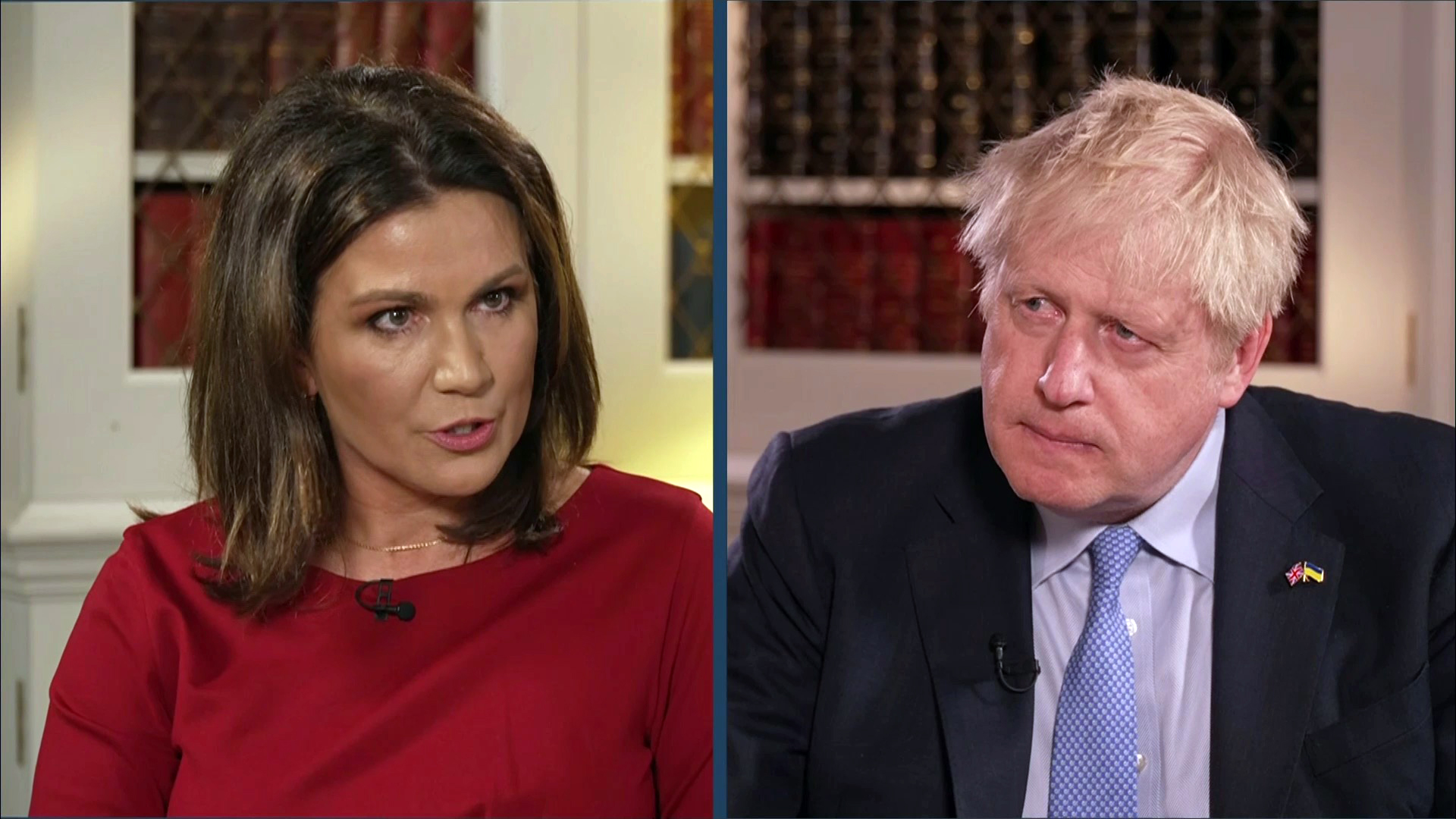 The no-nonsense presenter grilled the Prime Minister for avoiding the ITV programme for almost five years and kicked off their chat by asking whether he is ‘honest’, quickly reminding us all why she should never be underestimated.

After introducing the leader, Susanna wasted no time in messing about and got straight to making him squirm.

‘Well thank you for being back with us, and it seems remarkable that before we get back into talking about Ukraine, so many people want to know, are you honest, Prime Minister?’ she asked.

Stumbling over his words, Mr Johnson responded: ‘It think you – yes – and I think that the, er, best way to judge that is to look at what this government says it’s going to do and what it does, and that’s what matters.’

Susanna hit back: ’I just want a straight answer – you’re an honest speaker?’

’Yes, and er, I do my best to represent faithfully and accurately what I believe, and sometimes it’s controversial and sometimes it offends people, but that’s what I do,’ her subject replied.

Elsewhere in the chat, Mr Johnson admitted the Government could have been faster in helping Ukrainian refugees.

‘Could we have done it faster? Yes, perhaps we could.’

While many viewers praised Susanna for holding the Prime Minister to account, some complained the interview was an attempt to ‘sway people’s voting’ ahead of the local elections last week.

‘This interview is a disgrace,’ one fumed, while tagging Ofcom. ‘Your bias is terrible and you are not a balanced journalist!! Unacceptable!!’

‘This isn’t an interview by @GMB it’s @susannareid100 trying to sway people’s voting on Thursday,’ another wrote. ‘Sorry but this needs to be looked at at a much higher level like @Ofcom. This is disgusting’

Television watchdog Ofcom has confirmed that 87 people complained about the Prime Minister’s interview.

Mr Johnson was last officially interviewed on the ITV breakfast show in 2017 when he was foreign secretary.

Of course, some will remember how he fleetingly featured on the show in December 2019 when he appeared to hide in a fridge to avoid questions from Susanna and Piers Morgan.

What is Ofcom and what does it cover?

Ofcom is the regulator for the communications services that we use and rely on each day.

The watchdog makes sure people get the best from their broadband, home phone and mobile services, as well as keeping an eye on TV and radio.

Ofcom deals with most content on television, radio and video-on-demand services, including the BBC. However, if your complaint is about something you saw or heard in a BBC programme, you may need to complain to the BBC first.

Its rules for television and radio programmes are set out in the Broadcasting Code.

The rules in the Broadcasting Code also apply to the BBC iPlayer.

This Broadcasting Code is the rule book that broadcasters have to follow and it covers a number of areas, including; protecting the under-18s, protecting audiences from harmful and/or offensive material and ensuring that news, in whatever form, is reported with due accuracy and presented with due impartiality.

Audiences can complain to Ofcom if they believe a breach of the Broadcasting Code has been made.

Every time Ofcom receives a complaint from a viewer or listener, they assess it to see if it needs further investigation.

If Ofcom decide to investigate, they will include the case in a list of new investigations, published in the Broadcast and On Demand Bulletin.

An investigation is a formal process which can take some time depending on the complexity of the issues involved.

Ofcom can also launch investigations in the absence of a complaint from a viewer or listener.