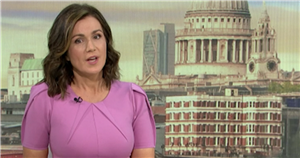 Good Morning Britain host Susanna Reid was forced to apologise to viewers within the first 25 minutes of Tuesday's show.

The 50-year-old television star was back on our screens to present the latest edition of the ITV breakfast show alongside guest host Bill Turnbull.

Susanna and Bill welcomed Superbad actor Seth Rogen at the top of the show to discuss his new book Yearbook.

However, the conversation quickly turned to his open use of cannabis.

As the interview came to an end, Susanna apologised to those watching at home for Seth's "strong language".

Viewers didn't seem to notice Seth's bad language and instead switched-off due to the length of the 10-minute chat with Seth.

Another moaned: "This is boring @GMB."

A third person posted: "Anyone else finding #GMB rather boring these days."

While a fourth social media user said: "What a rubbish start to #GMB, where is the news???"

Bill's return to Good Morning Britain was welcomed by viewers on Monday.

Twitter was ablaze with praise and compliments, with one fan writing: "Fantastic to watch Bill Turnbull this morning. Class act.

"He's totally right about the time keeping too. Many people turn on to watch the news on the hour, so overruns are sloppy."

Another chimed: "What a wonderful surprise seeing Bill back on the TV. A true professional with more than a touch of excellent humour. Pleased to see him looking so well."

"It is great to see Bill back with you Susanna, truly is, brings back memories of those Breakfast days, its made my morning and Susanna looking gorgeous in green this morning, you truly do. A brilliant partnership together Susanna and Bill," gushed a third.

Bill was equally happy to be back in the presenting chair.

He said: "I'm delighted beyond words," before adding "It's been too long, Susanna!"

Although he was overjoyed to be reunited with his former co-star, he did confess that the early start had been "painful".

In 2016, Bill quit the BBC Breakfast after 15 years which came as a shock to many viewers.

Susanna left BBC Breakfast in 2014 when she competed on Strictly Come Dancing.