Having Jared Padalecki, Jensen Ackles and Misha Collins on hand to each present their new series at the CW upfront, the network could resist getting the Supernatural trio back together on stage. 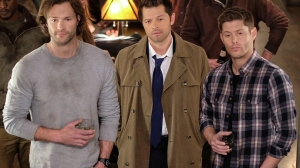 They interrupted the CW chairman and CEO Mark Pedowitz spiel about movies and specials to pitch some ideas they have in the arena.

“Back of a napkin-type stuff like… A Very Castiel Christmas,” Collins said about an angel-themed holiday special named after his Supernatural character.

“How about an awards show from hell, we’ll call it the Demons’ Choice Awards,” Ackles said to a big laugh.

The CW is the TV home for the Critics’ Choice Awards.

While not all jokes landed, and Pedowitz’s comedic timing was a little off (“Yeah, being a straight man, not my thing,” he admitted following the skit), the reunion showcased Padalecki, Ackles and Collins’s chemistry, which kept Supernatural going for so many years and livened up the upfront presentation.

“It’s fabulous to have all three of you back on stage again,” Pedowitz said.

Collins commemorated the reunion with an on-stage selfie, which he later posted on Instagram with the the caption, “The boys are back in town.”