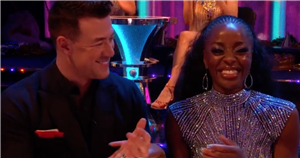 Tonight sees the grand finale of Strictly Come Dancing take place, where one couple will be crowned as the 2021 winners, lifting the glitter ball trophy.

After her and partner Kai's shock exit and withdrawal from the competition, AJ Odudu made a surprise return with her pro dance partner leaving fans at home and in the studio emotional.

Claudia Winkleman and Tess Daly paid an emotional and heartfelt tribute to AJ as they opened the final show of the 2021 series.

"Sadly AJ and Kai are not dancing tonight," Tess began, "AJ sustained an ankle injury earlier in the week and despite treatment and rest she is unable to dance, so has withdrawn from the competition."

Claudia then said: "We'll be speaking to AJ later in the show, and I think we can all agree that although AJ cannot perform tonight she is and always will be an extraordinary Strictly finalist."

The crowd then erupted with cheers, whoops and screams in support of the star.

Taking to Twitter one fan said: "AJ and Kai are so adorable I can’t I’m so sad I wanted AJ in one of those stars."

Another penned: "Everyone chanting for AJ has me in tears. She’s been outstanding since week 1 and truly truly deserved to dance in this final."

While a third wrote: "I hate to be biased and moody but this would have been event television if all 3 were dancing and without AJ and Kai it's lost all its sparkle."

And a fourth tweeted: "Nearly bawled my eyes out when the audience chanted for AJ, so I’m guaranteed to be a mess by the end of to this."

AJ was forced to withdrawal from the BBC One competition after sustaining an injury.