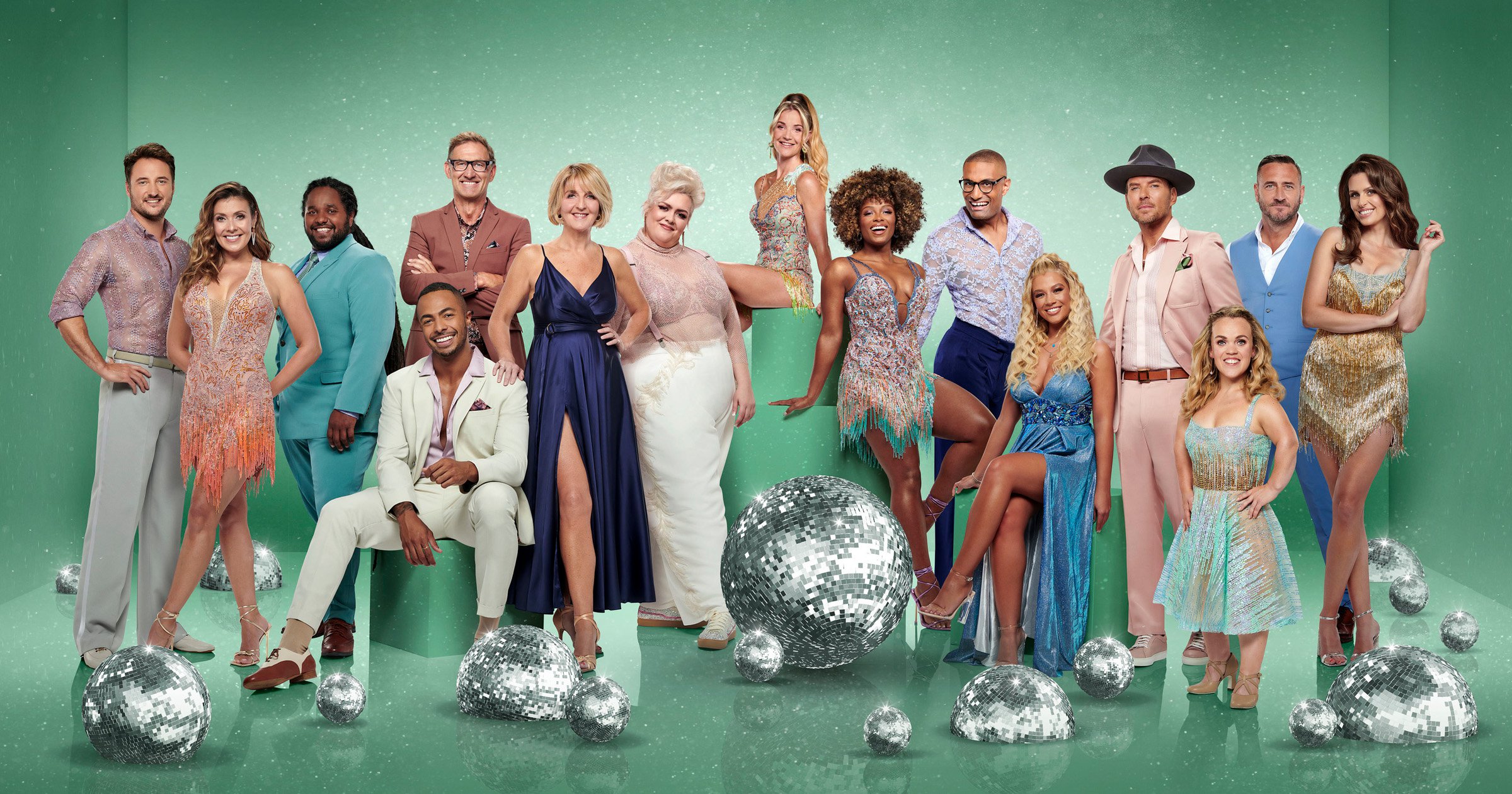 The long-awaited partnerships have been revealed for Strictly Come Dancing, and it’s the first time in the show’s history that two same-sex couples will take to the floor.

Strictly will begin with the first live show on Saturday, where fans will finally get to see this year’s cohort of celebrities and their professional dance partners compete against one another.

As well as 15 new celebrities taking to the dancefloor, there will be a few new faces among the pros – but hosts Tess Daly and Claudia Winkleman will be returning for the 20th series of the hit show.

Here are all of Strictly’s 2022 partnerships:

Paralympian Ellie is set to take the floor with Nikita Kuzmin, with adjustments being made to their routines.

She previously revealed: ‘He’s never danced this with anyone with dwarfism before and I’ve never ever danced before in my life.

‘It might be so different but I think if I can do it, which is completely out of my comfort zone, people watching from home can realise they can adapt,’

Comedian Ellie is paired with Johannes – and the couple are sure to make a serious impression on the dancefloor, fulfilling one of Ellie’s dreams to be on the show.

She previously said: ‘I’ve wanted to do it forever. I’m so chuffed I can’t wait. I would love to find the joy in dance that people have.’

Before her partnership with Johannes was confirmed Ellie joked: ‘I want someone who’s patient. I need a tall patient person, so anyone really.’

Singer and radio host Fleur will be competing with one of Strictly’s new professionals, Vito, who will be making her debut on the show.

Fleur has been hotly tipped as a potential winner of the show before the first episode has even aired, and she signed up in honour of her late father who was a huge fan of the show.

She previously explained: ‘For me it’s sentimental because my dad, who passed away in 2020, Strictly was his favourite show.

‘I’m just going to be doing it for him. I’m gutted he can’t see me do it, but I’m going to keep him in mind when I’m doing the show. My family for that reason are going to be buzzing.’

Coutnryfile presenter Hamza Yassin will be taking the floor with Jowita, and he’s excited to show off the moves he’s learning.

He previously said: ‘I am absolutely over the moon to be joining Strictly 2022. Never in a million years did I think I’d be on such a cool show.

’I’ve been watching it for years and I can’t believe I’ll actually be there dancing live in front of the British public.’

Helen and Gorka are set to team up for this year’s competition and the Countryfile presenter has admitted the physical closeness will be a hurdle for her.

She previously explained: ‘I’m not that touchy feely, so I think the physical closeness I’ll need to have with my partner will take a bit of getting used to!’

EastEnders star James will be leaving his market stall on Albert Square behind in favour of sequins and sparkles.

He previously joked that his kids aren’t impressed with his moves, explaining: ‘I’m not known for my shimmy or my twinkle toes – in fact my kids regularly laugh at my dad dancing but it’s an honour to be asked and I’m going to give it my best shot.

’There are some huge dance shoes to fill and it’s truly exciting to follow in the footsteps of some amazing EastEnders talent. I’d love to do everyone proud.’

Comedian and actress Jayde Adams will form part of one of Strictly’s same-sex partnerships alongside Karen Hauer.

Taking part in the show has been something of a life-long dream for Jayde, who admitted: ‘Since I watched the first series in 2004, I feel like every step I’ve taken in my career over the last 11 years was to be on Strictly.

‘I cannot begin to express the emotions I am feeling, this means so much to me and my family. I’ve always watched it, apart from a brief hiatus in 2011 as I was relentlessly gigging every weekend (to try and get on Strictly).’

Kaye and Kai are set to tear up the dance floor together this series, but the Loose Women star admitted she worries about embarrassing herself on the show.

She revealed: ‘A friend of mine is a choreographer so he is showing me some of the basic steps and also making me disco dance around the room “like no one is watching.” He says I have to get used to feeling foolish!’

Kym will be paired with Graziano as they compete for the glitter ball – but the Coronation Street star has never been able to take part before due to scheduling conflicts.

She explained: ‘I’ve considered doing Strictly for years but the timings never worked out. I’m so delighted that this year they have!

‘I’m a huge fan of the show and can’t believe I’m going to go from watching at home in my pyjamas to actually dancing in front of the judges in a glittery dress, it’s unreal!’

Matt will be taking the floor with Nadiya but the Bros star has found training far harder than he was expecting.

He admitted: ‘It’s the biggest misconception [that musicians have an advantage] because what we do is instinctual, we’re told we have to move here and go there.

‘We understand music, but the discipline of being told where to go goes against everything we’ve learnt. I thought I would have an advantage, but I was immediately humbled.’

CBBC star Molly is the youngest star taking part at just 21, and will be dancing with new professional Carlos in this year’s competition.

She previously revealed: ‘I was worried that people would have a preconception that because I perform, I can dance, but I can assure you, it’s not the case.

‘I feel like that would give people an expectation that I’m going to be a good dancer, which is a pressure – that’s a little bit scary.’

The second of this year’s same-sex partnerships will consist of Richie and Giovanni, who will be taking the floor together.

Richie revealed that last year’s all-male pairing of John Whaite and Johannes Radebe inspired him to follow in their footsteps.

He revealed: ‘On a serious note, watching John and Johannes last year gave me the confidence to be in an all-male partnership this year.

‘I’m so glad I’m doing it. I just felt so much inspiration. I wish I could have seen that on TV growing up, when I was growing up as a teenager and constantly trying to discover what I was and what I wasn’t.’

Former Arsenal star Tony will be paired with Katya as the couple make their bid for the glitter ball trophy.

The football legend had previously been approached for the show in 2016 but believes now is the right time for him to take part.

He explained: ‘I’m 26 years without drinking and drugs, so I want to bring some mental health and addiction awareness around life and what I do today.

‘Dance is all part of the process; we used dance therapy in rehab, and I thought “go for it.”’

He continued: ‘I had a mental breakdown at 49. My new addiction is working too hard, so now I want to take things after Strictly. You can do anything when you’re free of addiction.’

Kiss radio presenter Tyler has been paired with Dianne for this year’s show – and the couple are going to give it their all in the competition.

He previously said: ‘I am SO gassed to be joining the Strictly family! As I started writing this I already got cramp.

‘It’s going to be one crazy incredible journey which will no doubt be SO far outside my comfort zone.

’It’s a show that means so much to me and my family and I can’t wait to seriously shake a leg on that shiny dance floor… with a side of sequins.’

Will Mellor and Nancy Xu

Two Pints of Lager and a Packet of Crisps star Will will be paired with Nancy for this year’s competition.

He revealed the special reason he chose to do the show: ‘I lost my dad in 2020 and I just thought from then I’ve just got to grab life and I’ve got to do things and I’ve got to create new memories and my mindset changed, and that’s sort of one of the reasons why.

‘It’s my mum’s favourite show so she’s had it really tough over the last few years so I thought we’ll do this.’

Strictly Come Dancing starts on Saturday at 6.10pm on BBC One.