Strictly Come Dancing star Katie Piper went into last weekend’s live show looking for a row with judge Craig Revel Horwood and she definitely got one.

Craig slammed the charity campaigner and her professional partner Gorka Márquez’s Jive as “really off-time” and “very stompy” — but seemed a bit taken aback when Katie clapped back and defended the routine.

During her appearance on spin-off It Takes Two on Monday (October 15), Katie and Gorka admitted to presenter Zoe Ball that they’d planned to fight back against any criticism Craig had beforehand, but it didn’t quite go to plan.

“The funny thing is that we were talking about that before [the dance],” Gorka revealed. “[She said], ‘If he gives me a comment’, then she said it!”

The couple’s time in the ballroom subsequently came to an end on Sunday night when they fell into the bottom two and lost a dance-off to Charles Venn and his partner Karen Clifton. 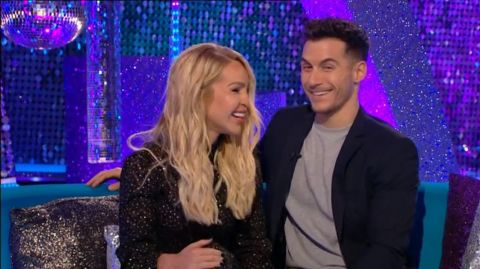 Reflecting on her elimination, Katie kept up her positive attitude: “The support from the Strictly fans and all the people that followed mine and Gorka’s journey has just been unreal.

“I think it’s kinda taught me that even if you’re not good at something or you don’t feel confident at something, you can put yourself out there. Although I’ve been eliminated, I still have loads of positive memories. I’ve learned stuff about myself. I don’t regret one bit of it.”

Strictly Come Dancing continues next Saturday (October 20) at 6.45pm on BBC One, with the results show following on Sunday, October 21 at 7.45pm.