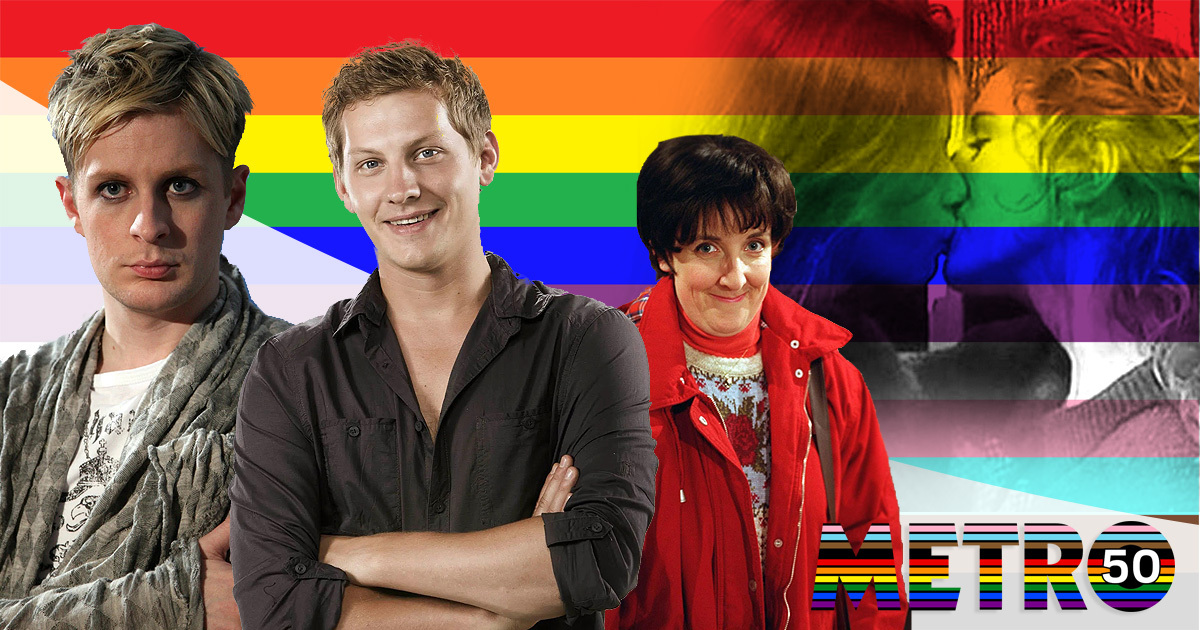 Soaps evoke a kind of empathy for their characters, the likes of which can’t be found in other forms of media.

As we build such an intimate relationship with them, soaps penetrate our daily lives, and their longstanding championing of LGBTQ+ people make the ‘otherness’ infinitely more visible.

The format normalises, blends and offers a robust and compassionate platform.

So, it’s a 2006 weekday, around 6:25, and my teenage self prepares for my daily dose of relationship peril and familial discourse, courtesy of Hollyoaks.

An explosion of androgynous, gender-bending fashion, fiercely applied eyeliner and a shock of highlighted hair sparkled across my screen.

Kris Fisher, played expertly by Gerard McCarthy, had arrived and for the first time in my young life, I could look at somebody on the screen and say: ‘he’s like me’.

I didn’t discover others that shared my personal form of gender expression in a gallery or an arthouse theatre, but in my living room, as soaps lead the way in making this representation accessible and mainstream, and providing us non-elite gallery folk with heart-filled, genuine and honest depictions of LGBTQ+ characters.

Amid the steamy affairs, the serial killers and high-stakes situations faced by the characters in soaps, there’s real life.

The long-form, multi-story shape soaps take provides the scope to deconstruct characters and lends itself to creating fully rounded, three-dimensional characters who exist alongside their sexuality or gender expression, and not because of it.

Television has all too often been accused of killing conversation, but in reality, it gets the nation talking, and the UK’s trailblazing soaps have often placed LGBTQ+ issues at the forefront of this conversation.

Soaps have long been a family tradition; in my own childhood home, it was bath time before Emmerdale while the Coronation Street closing music signalled bedtime.

In the homes of many of my friends and colleagues, long-standing family viewership of soaps meant that the characters and their trials and tribulations were dissected and discussed amongst the household, and even more so with friends in the following days.

The backlash faced by Eastenders in the late 1980s after airing a kiss between partners Colin Russell and Guido Smith was fierce and, while a bleak insight into attitudes of the time, it promoted LGBTQ+ issues to the forefront of the discussion, while Brookside’s Beth Jordache’s mid 1990s kiss with Margaret Clemence pushed the conversation further.

Although Beth was wrapped up in a domestic abuse storyline, her discovery and exploration of her sexuality was at no point used to heighten her situation or treated as a result of it. It was just another facet of who she was.

From the late 1990s, Coronation Street’s Hayley Patteron (more famously, Cropper) became the first ever transgender character to feature in a soap.

Hayley became not just the ‘transgender character’, she became a wonderful, loving wife and the loyal and kind friend. Her journey as a transgender woman was treated with dignity, respect, and also with true-to-life adversity, provided by Les Battersby.

Would Kris, who meant so much to me, have existed as a character outside of the traditional gender norms have without Hayley? Probably not.

Colin, Guido, Beth and Hayley walked so today’s representatives of the community could run, and today, LGBTQ+ characters are commonplace, but never just because they’re LGBTQ+.

John Paul McQueen of Hollyoaks was the face of a lauded coming out story in 2006. In 2015, his parent, Sally St. Claire, the UK’s first trans character to be played by a trans actress, stands strong as a warm, dedicated and compassionate woman…who happens to be trans.

Emmerdale’s Liv Dingle brought asexuality to the forefront of the discussion, while Eastenders Suki Panesar gives a pained representation of repressed sexuality and Coronation Street’s James Bailey has played the suffering of homophobia in conjunction with racism.

Soap characters simply cannot afford to be tokens. Unlike film and short-form television series, soaps are ongoing and, for a character to survive the axe and be taken into the family home, they need to have substance.

Soaps are responsible for bringing all of the wonderful colours of the rainbow into our living room, but wrapping those around real people.

People with hopes, wants, needs and, traditionally in British soap, people with enormous juicy secrets that act as a tantalisingly ticking time bomb.

With Kris, I had somebody I could point to when I didn’t have the words to define who I was. He was delivered into my family living room and, at times, articulated traits that he and I shared in a much better way than I could and, years later, the soaps continue to smash ground by bringing these issues directly into the homes – and hearts – of the country, changing attitudes and hearts in a way that only they can.

This year marks 50 years of Pride, so it seems only fitting that Metro.co.uk goes above and beyond in our ongoing LGBTQ+ support, through a wealth of content that not only celebrates all things Pride, but also share stories, take time to reflect and raises awareness for the community this Pride Month.

And we’ve got some great names on board to help us, too. From a list of famous guest editors taking over the site for a week that includes Rob Rinder, Nicola Adams, Peter Tatchell, Kimberly Hart-Simpson, John Whaite, Anna Richardson and Dr Ranj, we’ll also have the likes Sir Ian McKellen and Drag Race stars The Vivienne, Lawrence Chaney and Tia Kofi offering their insights.

During Pride Month, which runs from 1 – 30 June, Metro.co.uk will also be supporting Kyiv Pride, a Ukrainian charity forced to work harder than ever to protect the rights of the LGBTQ+ community during times of conflict. To find out more about their work, and what you can do to support them, click here.