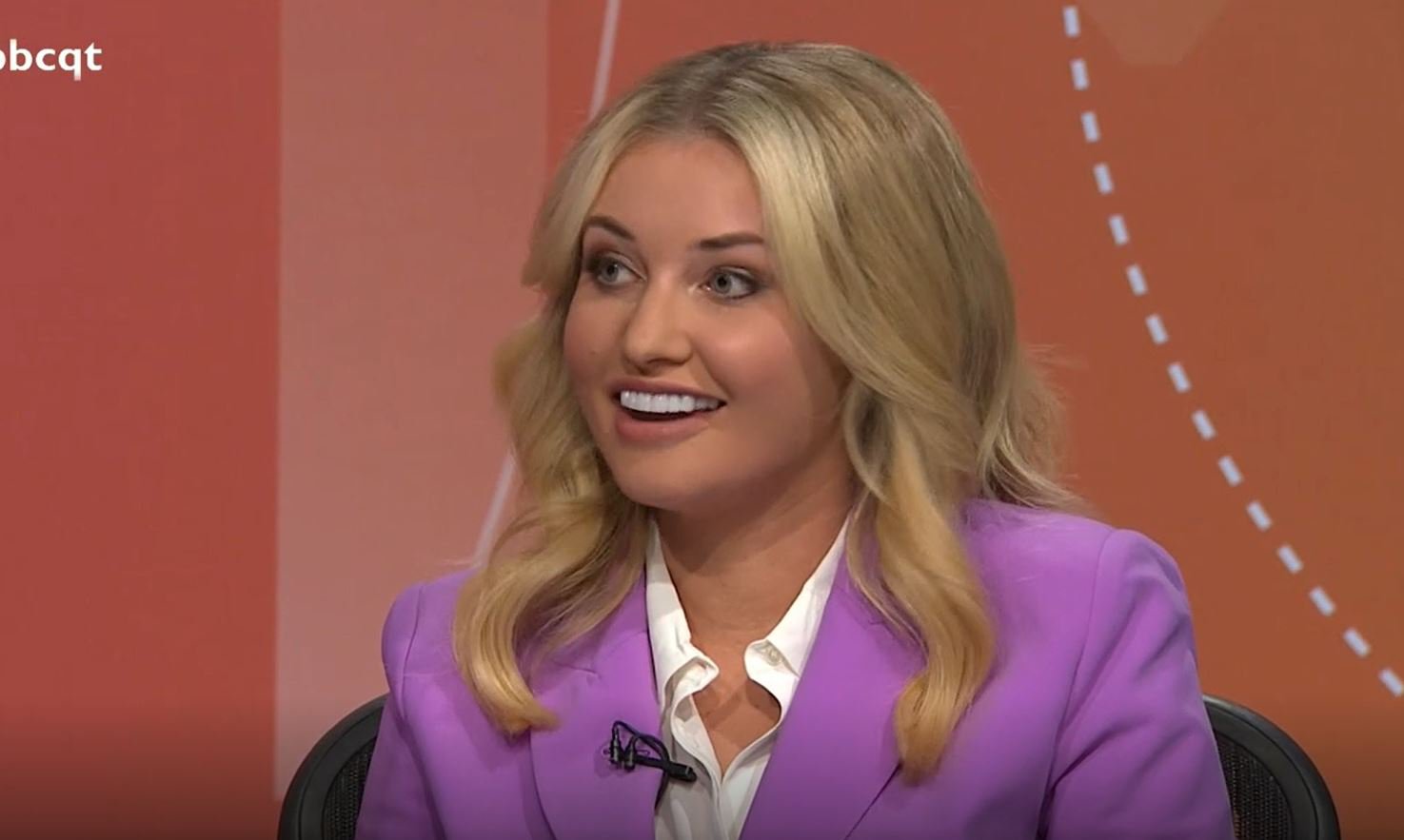 When Amy Hart – a flight attendant turned reality star who appeared on series five of Love Island in 2019 – made an appearance on the BBC Question Time panel last night, critics wasted no time in lambasting her.

Ahead of her debut, one commentator took to Twitter to lament: ‘Shudddersome that a Love Island contestant is the third best qualified political commentator appearing on QT tonight’, to which Amy replied: ‘You know I was only on Love Island for 5 weeks of my 29 year life?’

And she’s right. Reducing her down to that one experience completely eradicates everything else. In reality just because someone’s appeared on a reality TV show, it doesn’t mean they don’t have valid opinions and interesting takes on other topics.

I’d go even further to say that it’s great to have someone that young and potentially politically apathetic people can engage with.

This is in spite of the fact she spoke intelligently on a number of topics, especially the politics of attracting HGV workers post-Brexit, explaining that in her opinion it’s unfair to invite EU workers over and only give them three month visas on a rolling basis. ‘You can’t treat people that way,’ she said, then received applause from the audience.

Thankfully, they acknowledged what she could bring to the show.

Throughout the hour, despite not speaking a great deal, Amy held herself with poise and confidence, she clearly knew her onions when it came to citing stats that backed up her points, and when she did speak she spoke eloquently about topics that clearly really matter to her.

She proved that participating in a reality TV show doesn’t at all negate her obvious intelligence, that people who appear on such shows aren’t only contestants or ‘airheads’, and in fact has cleverly and admirably leveraged her status as an influencer to speak on pressing issues.

Nevertheless, one person wrote on Twitter: ‘Why is there a Love Island contestant on Question Time? This used to be a serious political discussion show!’ while another asked ‘And what actual qualifications does Amy Hart have?’

The irony of such a question – given that the star recently told a parliamentary inquiry into influencer culture earlier this month that she didn’t believe social media sites such as Twitter, Facebook and Instagram were supportive enough when it came to trolling – is clearly lost on these keyboard warriors.

Moreover, a quick Google search would have also shown them that Amy is amply qualified. A self-professed expert in aviation, trade unions, food insecurity, food banks, young people, excluded freelancers and theatre, she’s been a paid-up member of the Labour party since the age of 17 and recently interviewed leader of the opposition Keir Starmer, taking questions via Instagram Live from young people. She also volunteers at her local food bank.

But even such an impressive CV misses the point. She shouldn’t have to be ‘qualified’, whatever that actually means.

Bringing in a new audience who wouldn’t usually watch Question Time can only be a good thing; that people feel represented in political discussions and debates, which often feel exclusionary and elitist, is fundamental.

Having Amy on the panel felt like having a friend, a ‘normal person’, be part of the conversation. The value of that can’t be underestimated. Previous panels have sometimes felt stale or overly intellectual in a way that I’ve felt to be exclusionary, so seeing Amy sat at the table was a breath of fresh air.

These conversations should be accessible, and someone like Amy with a huge following has the power to potentially bring young, politically apathetic people into politics by making it feel like it’s for them, too.

It’s easy amid the posturing and jargon to forget that MPs are meant to be members of the community, representatives of the people, such that the complex world of politics can feel like a windy path not to be trodden by ordinary folk.

As Amy herself puts it in an article written for the iPaper: ‘Politics is all around us. So many people think that “politics” is lots of men in suits far away in London, but from the moment we wake up in the morning our lives are political […] Nothing changes if it isn’t challenged and the more influencers who use their platform to get people engaged, the better.’

She must have been nervous – as any of us would be – before appearing on the show (she admitted it was a ‘really scary’ prospect). She should be absolutely celebrated for having the courage to step into that intimidating space – she previously said ‘I’m not a politician, but I’m going to go there, give it a go and really embrace the opportunity’ – to take up space, not be cowed or deterred by the trolls, and to speak her mind.

Before appearing on Question Time she said: ‘I’ve always liked proving people wrong and just because I was on a reality TV show doesn’t mean I don’t read the news or can’t have opinions. I just wish people would realise that we’re not all airheads.’

Well Amy, you killed it.