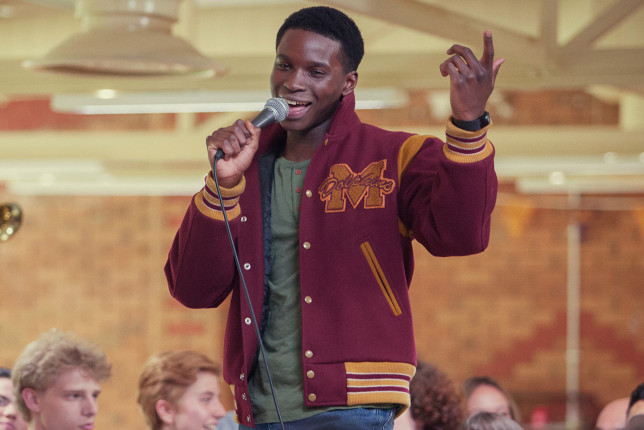 While we wait patiently for season 3 of Sex Education to finally hit our screens, we now know to anticipate an ‘increasingly beautiful’ role for Jackson Marchetti.

The series follows the lives of students as they battle with figuring themselves out and growing up, starring the likes of Asa Butterfield (Otis Milburn), Emma Mackey (Maeve Wiley) and Gillian Anderson (Dr Jean F Milburn).

Played by Kedar Williams-Stirling, Jackson is the head boy at Moordale Secondary School and a swimming champion.

At the start of the hit show, he seems like your typical jock; popular, a star athlete and looks like he’s going to go far. What we soon realise though, is how much he is struggling with living up to everyone’s standards.

Most of this pressure comes from one of his mums, Sofia, played by Hannah Waddingham.

After a tense build-up in season two, Jackson and Sofia have a heated argument in episode seven, which eventually leads them both to have a heartfelt conversation.

Hannah told Collider what’s in store for the Marchettis in the next series.

‘Yes, but we [Jackson’s mothers] are barely in season three because I was busy doing Ted Lasso. I mean, barely,’ she said.

‘But I will tell you that season three and my boy Jackson, Kedar, his contribution becomes increasingly beautiful.’

Previously speaking to Cold Feet star Cel Spellman on his Call of the Wild podcast, Kedar said there’s ‘definitely a different tone’ to the new series.

‘There’s two new characters this time. I feel like it’s going to be different because we also shot it in a different season. Normally we shoot in summer but because of Covid we had to shoot it in the winter,’ Kedar said.

‘There’s a whole storyline that happens where just the aesthetic of the whole thing changes. So without giving too much away, it’s definitely a different tone this year and it’s going to be exciting to see on screen.’

You can stream all previous series of Sex Education on Netflix.