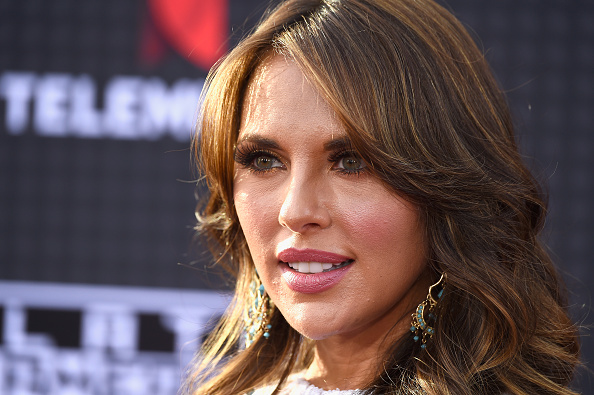 Selling Sunset newcomer Vanessa Villela, who joined the cast of the hit Netflix TV show in its recently dropped fourth season, has revealed that she’s been diagnosed with inflammation on the brain as a result of long Covid.

The real estate agent tested positive for Coronavirus after a holiday to Mexico this summer, just ahead of cameras rolling on season five of the reality series.

Vanessa was therefore forced to miss five weeks of filming on the upcoming season as she grappled with the illness, a time which she described as ‘very challenging’.

Speaking to OK!, she revealed: ‘I have something called long Covid. I don’t have the virus anymore, but the side effects of the virus are still affecting my body.

‘Some people get affected in the lungs, some people by the stomach, or people like me — I got inflammation in the brain. I had a lot of hormonal imbalances and Vitamin D deficiencies which can sound quite easy, but it’s not that great either.’

The 43-year-old shared that her doctor had in fact suggested that could be one of the reasons she ‘got it so bad’, before adding: ‘I’m much better now; thank God I have a very amazing doctor.’

The star also credited the medic provided by the show for saving her from a trip to the hospital with her boyfriend, describing herself as ‘incredibly grateful’.

‘I was starting to have an infection in the lungs and it was very close to becoming pneumonia,’ she revealed. ‘So that’s when you have to go to hospital, but he nailed the antibiotics on time.’

Just a few weeks ago, Vanessa’s co-star Mary Fitzgerald lifted the lid on the release date for season five, revealing that it’s going to be just as dramatic as fans are hoping.

Appearing on Lorraine with her husband Romain Bonnet to talk about what went down during season four from her perspective at the end of November, Mary also didn’t disappoint with chat about the next season.

‘With all of the women, they are all big characters like you said, they all fall out with one another, it’s crazy. Are we going to see more of this? The next season is going to happen, right?’ Lorraine asked.

‘Yes, yeah. We have season five coming out probably in March,’ Mary responded.

‘We’re done filming. We have a couple of pick-ups when we get back, and a couple of interviews still to do, but for the most part, season five’s done filming, and it will be very, very good.’

Mary implied that big lingering questions will be answered, saying that it’s going to be ‘big’.

‘Season four I think was very like… a lot was going on and just shocking and great and dramatic, and season five’s gonna be the same,’ she said.

As a quick reminder, the last season featured Christine Quinn’s fallout with Mary and the other members of The Oppenheim Group deepening, with the controversial star recently joking she had backache from ‘carrying’ that season, to hints of Chrishell Stause’s current romance with boss Jason Oppenheim.

Selling Sunset seasons 1-4 can be streamed on Netflix now.