Just like Gotham, the fictitious metropolis of Granite City sucks. As multiple newscasts tell us, there’s a civil-servant strike dragging into its third month, but widespread economic insecurity was already the norm. Dark, dirty, and crime-ridden, it’s not the kind of place anyone wants to grow up. So it’s no wonder that sweet tween Sam (Javon Walton, best known as Ashtray in HBO’s “Euphoria”) clings to any hero he can find — especially Granite City’s own dearly departed superhero: Samaritan.

Julius Avery’s “Samaritan” opens with a giddy monologue (with lots of candy-colored, fast-moving comic panels for the visual assist) from Sam that tells us Samaritan’s backstory, and Bragi F. Schut’s screenplay (inspired by the Mythos Comics graphic novels he created with Marc Olivent and Renzo Podesta) doesn’t hesitate to pile on the exposition. Years ago, a pair of gifted brothers possessed of super-strength and power were made miserable by the denizens of Granite City, who burned down their house and killed their parents in the blaze. Samaritan turned his rage into helping people; Nemesis went full-throttle bad guy. When they last fought 25 years ago, it’s believed that both perished in the full-scale fight to the death. The end?

Sam is convinced (for no reason other than he needs something to believe in) that Samaritan still lives. What happens when a kid — for whom matters of good and evil are actually life and death — meets his hero? Such is the thrust of “Samaritan,” which tries to reorient the superhero story outside the confines of Marvel and DC films, only to find itself trapped in uneasy mediocrity.

Things weren’t great when Samaritan and Nemesis used the streets of Granite City to battle out their demons; they’re even worse now. Unease aside, Sam has a dead dad, an overworked mom, and the family constantly faces eviction. Tucked away on the back door of his closet? Call it a shrine, call it “clues,” but it’s all Samaritan stuff. The most important piece is a running list of random dudes who, Sam believes, could be the possibly still-living Samaritan. (He’s not alone in this quest; the film briefly introduces Martin Starr as a local bookshop owner and amateur sleuth also on Samaritan’s, one of many threads picked up and dropped without explanation.) 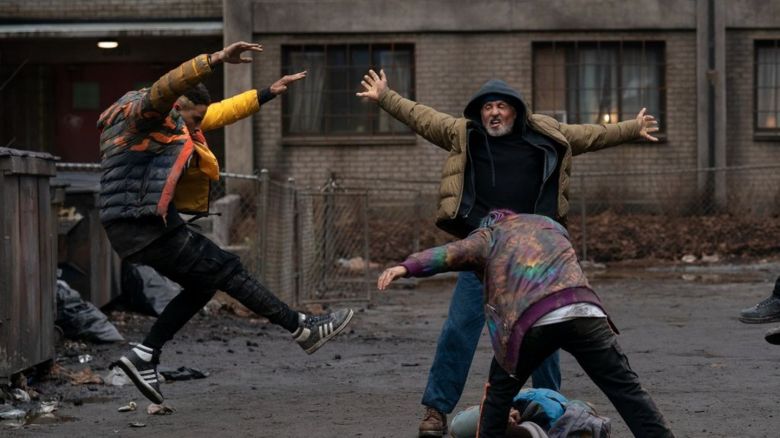 Sam’s affection for Samaritan isn’t hip. Most of his neighbors and friends are hung up on Nemesis, still painting graffiti of his logo everywhere (Sam tries to dutifully paint it over with Samaritan’s own mark). Resident bad dude Cyrus (Pilou Asbæk) explains that Nemesis may have hurt people, but he always punched up and fought for the little guy; Samaritan was basically “a cop” who looked out for the man. But when Sam is saved from some local toughs by gruff neighbor Joe Smith (Sylvester Stallone), he’s convinced Samaritan is back and wants to fighting crime.

Considering “Joe Smith” can flick off bad guys with a gentle slap, or get hit by a car and get back up again, and can even heal his own broken bones, Sam’s theory (for once!) seems pretty sound. But what does it matter? Teetering between cute buddy movie (what would you do if your childhood hero was someone you could hang with every day?) and a “dark and gritty” superhero drama that involves a bad guy’s plot to smash up the city for fun with a stolen, super-charged weapon, “Samaritan” is constantly at odds with itself. Is this “My Spy” or is it “The Dark Knight”?

While Stallone occasionally seems to be enjoying himself — popping off the kinds of one-liners we expect from late-career Rocky and being quite delightful when working one-on-one with Walton — the fun suffers from a lingering sense that a massive lesson or “twist” is about to come down at any minute. (It becomes less fun when a discomfortingly de-aged Stallone shows up in one of the film’s many flashbacks, proving that the technology is not quite there for this budget.)

When it arrives, that central lesson (and accompanying twist) is both obvious and muddled: There is good and bad in everyone, it’s up to us to make the best choices every day, and heroes are often not who we expect. Audiences familiar with Stallone’s greatest hits may expect him to break out his classic “Rocky IV” speech — “If I can change and you can change, everybody can change!” — just seconds before he takes a definitive stance on who can be good, who can be bad, and what they deserve because of those choices.

In the moment, it feels satisfying — yeah, Sly, take those bad dudes out! — but much like the rest of “Samaritan,” it doesn’t hold together under scrutiny. Who wouldn’t want Sylvester Stallone to smack down their foes? But in a movie world crowded with everyone eager to make their own special superhero stand out, this one doesn’t pack much of a punch.