Richard Madeley blasts ‘Why are we being locked down? We’ve been vaccinated!’

On Thursday 3 June, Boris Johnson announced Portugal would move from the green list to amber to ensure there wasn’t a rise in Covid cases amid concerns over new variants. The change means many of those planning trips to Portugal, or who are already there, will now have to quarantine for 10 days after they return. Speaking about the new restrictions on Good Morning Britain, Richard Madeley asked Dr Amir Khan why more restrictions were in place despite the high numbers of vaccinations.

Richard remarked: “I have to say, he’s just echoed something that my wife Judy said to me last night.

“She looked at me as the scales fell and said, ‘Hang on, we’ve been double jabbed, most of the adult population has had one jab, many have had two. Why are we in a worse position in terms of travel than we were a year ago when the idea of a vaccine was still a theoretical one?’

“Now we have multiple vaccines, why are we in a worse position?” 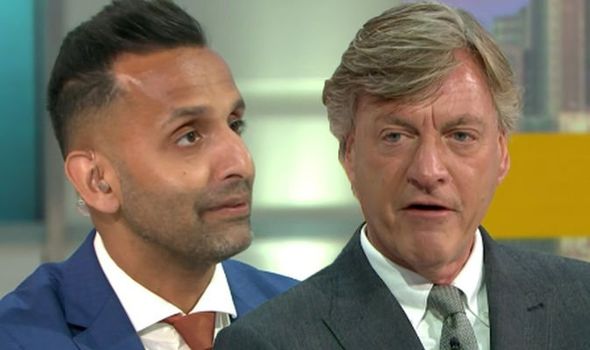 “We didn’t have vaccines but people were allowed to travel over the summer and then we saw a huge surge in cases from September onwards.

“Most of that was down to foreign travel and mixing after that.”

Richard cut in: “But we had no vaccines then.”

“But we saw a lot of people die over the winter,” Dr Amir hit back. “We’re not in a worse position now in terms of numbers of deaths and hospitalisation, we might be…” 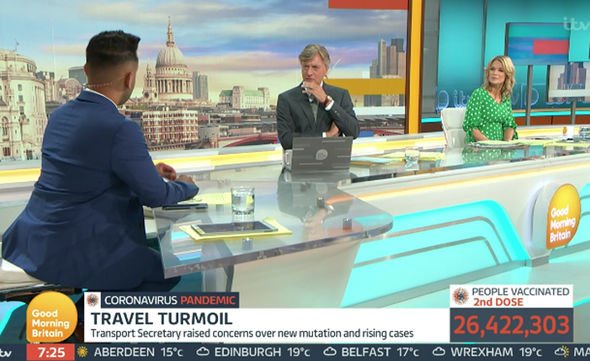 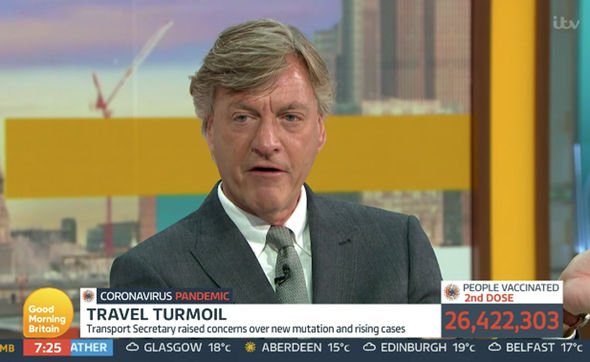 Richard interrupted: “No, she meant freedom of movement.”

“Freedom of movement, exactly,” Dr Amir continued. “We have to be cautious, we have to be.

“All of the mistakes we have made in the past is because we have reacted too late.

“I have problems with traffic light system, I really do. I think it’s ambiguous and leads to problems like this.

“I have huge empathy with people who have booked trips to places like Portugal who are there already and the airline industry.”

Much of the travel and tourism industry has hit back at the tighter restrictions on foreign holidays with no new countries being added to the green list.

British Airways said it was “incredibly disappointing and confusing news, not just for aviation but also for our customers”.

A spokesperson commented: “The UK has reached a critical point and urgently needs travel with low-risk countries, like the US, to re-start the economy, support devastated industries and reunite loved ones.”

Meanwhile Easyjet’s chief executive, Johan Lundgren, said as “Portuguese rates similar to those in the UK”, relegating the country “simply isn’t justified by the science”.

They added: “When this framework was put together, consumers were promised a waiting list to allow them to plan.

“Yet the government has torn up its own rule book and ignored the science, throwing people’s plans into chaos, with virtually no notice or alternative options for travel from the UK.”