Ratings: Not a Lot of Love for Fox's 'iHeartRadio Music Awards'

WrapPRO Roundtable: Will the Sports Rights Bubble Ever Burst? | Video

Ratings: Not a Lot of Love for Fox’s ‘iHeartRadio Music Awards’

ABC and NBC have better Thursdays

ABC and NBC tied atop the ratings leaderboard last night, with the Disney-owned broadcast network holding the total-viewer tiebreaker.

Fox was third in ratings with a 0.4/3 and fourth in viewers with 1.7 million. If those numbers look familiar, it’s because they’re straight from the iHeartRadio awards, which ran for the entirety of Fox’s two-hour primetime. 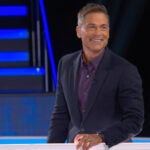 CBS and Univision tied for fourth in ratings, both with a 0.3/2. CBS was third in total viewers with 2.7 million, Univision was fifth with 1.1 million.

For CBS, sandwiched between a bunch of repeats, an original episode of “The United States of Al” received a 0.4/3 and 3.9 million total viewers.

Don’t feel too bad for Fox and CBS. The two may not have had a great final Thursday in May, but they split the 2020-21 September-to-May TV season: Fox finished first among adults 18-49 and CBS took yet another total viewer crown, its 13th straight.