Following the news of Queen Elizabeth II’s death last week, crowds have been forming outside of Buckingham Palace to leave flowers and gifts as a mark of respect for the monarch. Thousands of people in Scotland also gathered around to witness the Queen’s coffin being transported from Balmoral Castle to Edinburgh, before finally arriving in London.

However, there has been a lot of backlash online after one American professor tweeted she hoped the monarch died in “excruciating pain”.

Dr Anya’s comments came after she claimed the Queen was the head of a “thieving, raping and genocidal” empire.

Discussing the remark on his show Uncensored, Piers launched into a rant about Uju when speaking to American columnist Michael Luciano, who questioned why Britain still had a monarchy.

“Michael Luciano, you’re a columnist over in America, and you think we’ve all lost our minds, why?” Piers quizzed.

Michael replied: “Well, it’s the year 2022, and you all still have a monarchy up there [and it] does not have the kind of political clout that it used to. 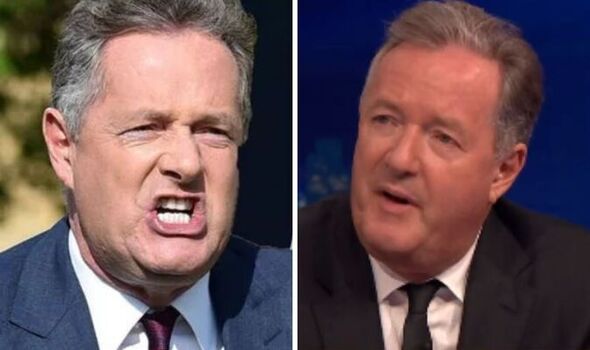 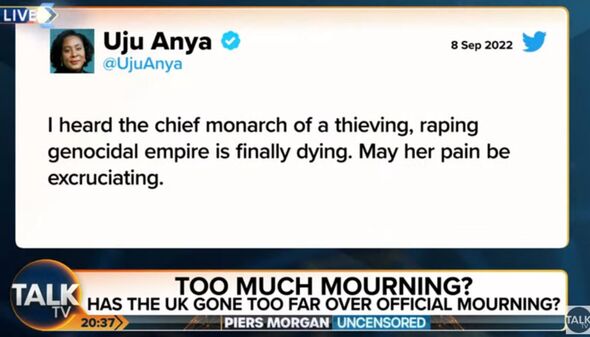 “Which in a way makes it even weirder because the Royal Family serves no real actual function.

“And yet, you just kind of keep them around,” the TalkTV guest claimed.

He continued: “I would say like, here in America, we’ve lost our minds even more because I understand all of the coverage of the Queen’s death and the ascension of Charles, I get that from a UK perspective.

“But we here in the United States for some reason, are also all in on the coverage of the Royal Family.” 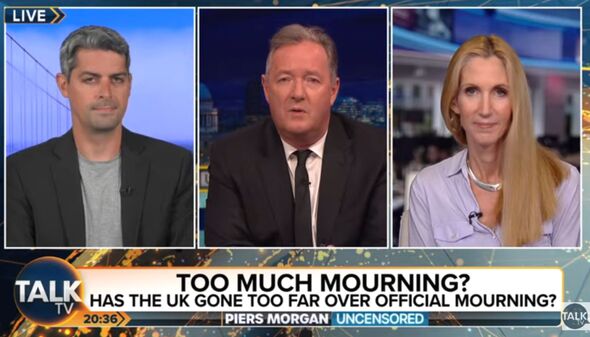 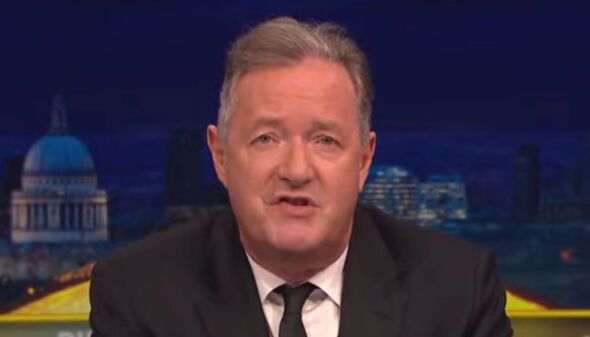 Turning his attention to Uju’s tweet, the TalkTV host fumed: “I can understand why some Americans don’t get the concept of a monarchy.

“What I find really objectionable is what some American academics have been saying.

“So this is a woman called Uju Anya. She’s actually an academic at Carnegie Mellon.

“She teaches people this woman, and she tweeted this, ‘I heard the chief monarch of a thieving, raping, genocidal empire is finally dying. May her pain be excruciating’.

“This woman is an assistant professor teaching people,” Piers reiterated in disgust.

“Another assistant professor in Rhode Island tweeted she would dance on the graves of every member of the Royal Family, especially the Queen.”

“And Michael, this to me crosses a line,” Piers raged. “I would feel the same if anyone in Britain said this about a president who just died. What is wrong with these people?”

“I definitely want to interview you,” the host tweeted in response. “I’d like you to try repeating to my face that you hoped the Queen died in ‘excruciating pain.’

“But I suspect like most vile ‘woke’ trolls, you won’t have the guts. Do you?”

Uju was quick to reply: “No, Piers. You want to interview me because your career died in excruciating pain, and you need the ratings. But I won’t let you chase clout off me. Like I said, I no dey put food for my enemy mouth.” (sic)

Piers Morgan Uncensored airs between Monday and Thursday at 8pm on TalkTV.