After Meghan Markle and Prince Harry’s interview with Oprah was broadcast, Phillip Schofield detailed how he went to This morning early so he could watch it in full before dissecting it on the show. He remarked several grenades were thrown at the Royal Family with the revelations which were made by the Duke and Duchess of Sussex. Buckingham Palace has yet to comment on the claims made in the interview with Oprah.

“We got in early this morning and we watched it in full,” Phillip told viewers as he opened the show.

Holly asked: “And what did you think?”

“I wrote the words, ‘You never know what’s going on in someone’s seemingly perfect life.’ 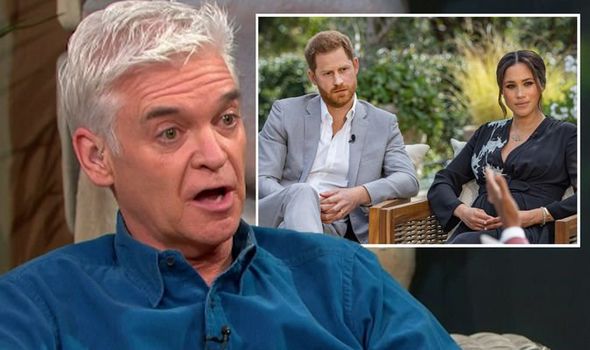 “They virtually echoed those words today in that interview.”

Holly added: “Absolutely and we have done it so many times haven’t we, we’ve cast judgement on a situation without really knowing what’s going on. It’s eye-opening.”

“A couple of grenades in there,” Phillip shared.

The presenters went on to talk to a number of contributors about the interview including Camilla Tominey, Finding Freedom authors Omid Scoobie and Carolyn Durand, and singer Jamelia.

Camilla spoke on Meghan’s claims that she was the one who was left in tears not Kate Middleton, as reported by the media.

Ahead of her wedding to Prince Harry, it was reported Meghan has made Kate cry during a feud of the flower girl dresses.

Meghan told Oprah a disagreement did take place and it “made me cry” but Kate “owned it and apologised”.

“She did what I would do if I knew that I hurt someone, right, to just take accountability for it,” she added.

Camilla broke the story back in 2018 and commented on the latest developments on This Morning.

“I don’t agree with that because there’s always people briefing on all sides,” she explained. “So there are different households and different principals, as they are called, that you are dealing with on a daily basis about the stories you are writing.”

Holly asked: “Do you think she was lying then?”

“I think like with any story it was more nuanced,” Camilla explained. “When I originally reported it, I said Kate was left in tears.

“I said it was confused, like ‘What had happened here?’ but it was well-sourced and I have subsequently received a message this morning saying that story was accurate.

“Did they both end up in tears? Did Meghan not know that Kate was in tears? She is claiming Kate gave her an apology, a bunch of flowers and a card.

“Is Meghan in a position to comment on whether the Duchess was upset by the incident?”

Oprah With Meghan and Harry is on ITV at 9pm on Monday March 8. You can watch the full interview afterwards on the ITV hub