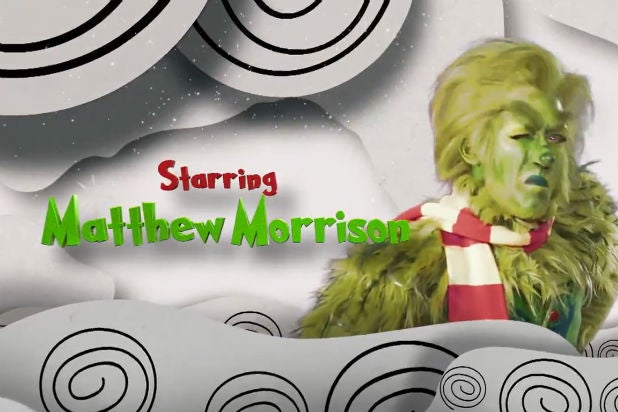 On Thursday NBC marked Thanksgiving day by rolling out the first teaser for its upcoming “Dr. Seuss’ The Grinch Musical.” Unfortunately, the very brief look at star Matt Morrison’s very campy version of the title character pretty much resulted in social media fingers nervously drumming and people vowing to stop Christmas from coming.

What we’re saying is, the teaser made a lot of people’s hearts shrink two sizes smaller.

Announced two weeks ago, NBC’s two-hour version of “Dr. Seuss’ The Grinch Musical!” will star Morrison (“Glee”) as The Grinch with Denis O’Hare as the adult version of his dog, Max, Booboo Stewart (“Descendants 3”) as young Max, and newcomer Amelia Minto (“The Lost Girls”) as Cindy-Lou Who. Unlike a lot of previous TV musicals, this one won’t be live (we assume because of COVID), and instead will be filmed at the Troubadour Theatre in London some time before its Dec. 9 airdate.

We’re assuming the production hasn’t filmed yet, as the teaser doesn’t actually show any footage. Instead, the 15-second spot kicks off with some very 1960s looking graphics as “You’re a Mean One, Mr. Grinch” plays in the background. A few seconds in, Morrison pops into view in costume as the Grinch, and proceeds to deliver what we can only describe as a “1970s Liza Minelli” take on the character. He poses, makes campy faces, prances, and then winks at the camera just as a narrator reads the line “I hate Christmas.”

And well, on Twitter a lot of people looked at that and said (paraphrasing here) nope. Examples include:

“please put a trigger warning next time. thank you.”

“please one pandemic at a TIME HAVENT WE SUFFERED ENOUGH”

See the teaser and a sample of reactions below.