Pennyworth Season 2 release date and cast latest: When is it coming out?

Epix and DC shocked the world when the two agreed to produce a new Batman spin-off series on the lesser-watched network.

That series is Pennyworth and focuses on the life of Bruce Wayne’s faithful butler, Alfred Pennyworth, years before he started working for the Wayne family.

Instead of a butler, Pennyworth was a British agent involved in some dangerous missions in the 60s.

Despite lukewarm reviews (73 percent fresh on Rotten Tomatoes), Epix chose to bring Pennyworth back for another season.

Here is everything we know so far about Pennyworth Season 2.

This article provides everything that is known about Pennyworth Season 2 and all related news. As such, this article will be updated over time with news, rumors, and analysis. Meanwhile, let’s dig down into what is known so far.

Is there going to be a Season 2 of Pennyworth?

Pennyworth was renewed for Season 2 in October 2019.

The season started filming in the UK in January, shortly before the coronavirus shut down the world.

“Pennyworth has been a big hit for us, embraced by critics and fans alike,” Epix President Michael Wright said.

“It was the highest-performing original series ever to premiere on Epix, more than doubling the viewership of the shows that came before it. Bruno Heller, Danny Cannon and WBTV have delivered a brilliant, must-watch series. We can’t wait to work with this phenomenal cast and creative team on another exciting season.”

Release date latest: When does Pennyworth Season 2 come out?

On October 12, Epix sent out a press release that revealed when fans can start the second season of Pennyworth.

At New York Comic-Con, Epix and DC revealed that Pennyworth Season 2 was coming on Dec. 13, 2020.

However, the episode dates seem a bit strange and there is no word on when Season 2 will end.

After this, Epix only states that the final episodes of Pennyworth Season 2 will air sometime in 2021.

This is because the show filmed a lot before the lockdown and still has work to do to get to the end.

Epix and DC also released the following poster, with the release date on it along with Alfred, Thomas Wayne, Martha Kane, and the British House of Parliament in flames.

The tag line is: “Bring Down the House.” 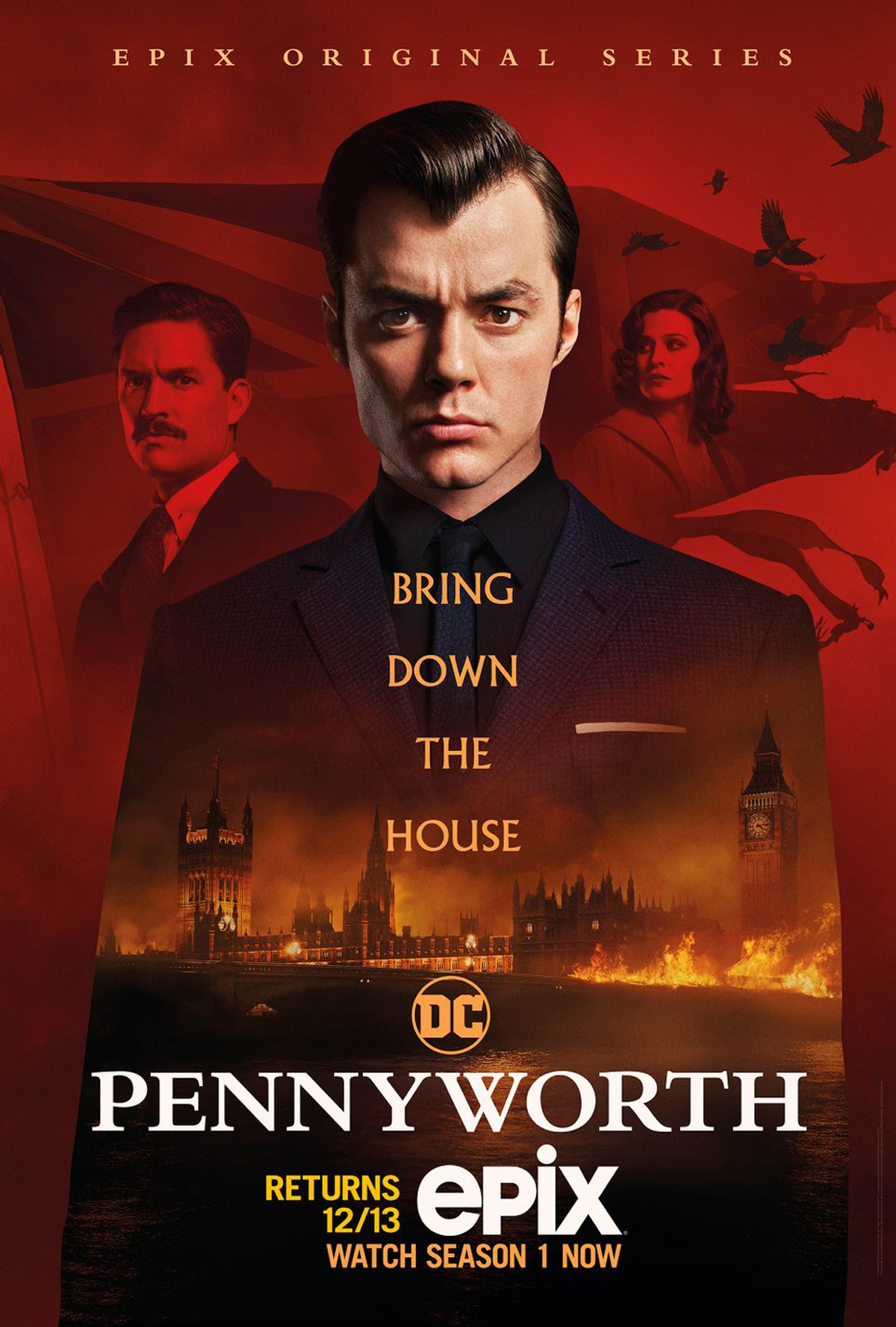 Here is the official character description for Alfred from the series:

“A young American scientist, precise to the point of pedantry, deliberately calm, honest, and direct to a fault; he suffers no fools gladly. His friends would say he’s a man of conscience; his enemies would say he’s judgmental and dogmatic. An integral part of the DC universe, this marks his introduction to the Wayne family.”

There are also two big new additions to the cast.

Simon Manyonda (His Dark Materials) debuts as Lucius Fox, who Batman fans know is the man who helps Bruce Wayne with his tech.

Lucius Fox is a young American scientist, precise to the point of pedantry, deliberately calm, honest, and direct to a fault; he suffers no fools gladly. His friends would say he’s a man of conscience; his enemies would say he’s judgmental and dogmatic. An integral part of the DC universe, this marks his introduction to the Wayne family.

Also debuting this season is Jessica de Gouw (Gretel and Hansel) as Melanie Troy, “a military orphan, who became a woman of the world far too young. She married a dominating older man, but with her wry intelligence and a sardonic sense of humor, she’s no submissive and gives as good as she gets. Introduced to Alfie as the wife of his former SAS Captain, the two kindred spirits have an immediate connection.”

Here is the full announcement from New York Comic-Con:

The Pennyworth Season 2 trailer hit online on October 12 and it was 40 seconds.

This trailer is the first time fans see Lucius Fox in Pennyworth Season 2 (at the 31-second mark).

Other notable moments in the Pennyworth Season 2 teaser trailer include Thomas Wayne mentioning he is engaged to another woman, a moment of dialogue mentioning Arkham Asylum, and Alfred saying he plans to move to America.