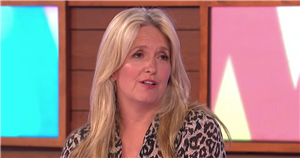 Speaking candidly on the popular day time show, the former model spoke openly about her pregnancy journey and said the rocker told her "come on let's have a baby".

When host Charlene White asked Penny how she told her husband she was pregnant, Penny divulged further into how it all took place.

Charlene asked: "Penny did you put you're pregnancy test into an ice popper and give it to Rod?"

The blonde bombshell replied: Not quite, but erm when Rod said 'come on let's make a baby' we decided that was the road we would go down…"

But before she could finish her sentence, taken aback by her revelation, surprised panellist Nadia Sawalha chimed in and asked: "Did he say that?"

Penny continued: "It had been about six years since we've been together and for a long time we didn't want to get married again and have children. But then he decided 'come on let's make a baby'."

Nadia interrupted and joked: "He could make a song out of that."

Viewers at home also found the funny side to Penny's admission and took to Twitter share that there is in fact a song with those particular lyrics.

One fan wrote: "There is a song out called that Nadia," followed by a laughing emoji.

While another agreed and penned: "Nadia!! there is a song called Let's make a baby" by Billy Paul!"

Speaking more about her pregnancy journey, TV personality Penny also spoke openly about the struggles her and Rod had to conceive and said she suffered with miscarriages.

She said: "I had a miscarriage and I was very cautious about building my hopes up, so I did a pregnancy test when I missed a period but sure enough it was positive.

The star then spoke about how she told her rockstar husband and how she gave him the positive test.

Penny added: "It was a Christmas gift or a birthday gift, I can't remember now, and it was a guilt box for his desk and I put it inside and wrapped it up so when he opened it, that was his gift, you know."