Pat Patterson Mourned by Wrestling World: 'You Did It Your Way'

“A true member of my family,” Shane McMahon writes 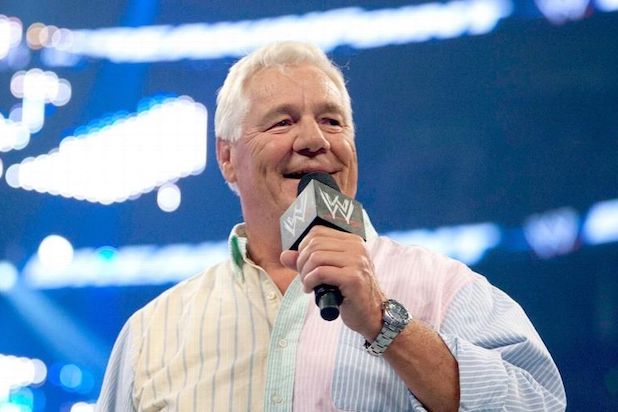 Pat Patterson, the former WWF professional wrestler, commentator and WWE match producer, has died at 79. When someone as beloved as Patterson passes, it does not take long for the genuine and heartfelt tributes to begin rolling in.

We’ve compiled a select few of the earliest ones. You can gather how great of a guy Patterson was from the words written by friends and colleagues.

“I can not express how crushed I feel right now with the loss of Pat Patterson,” WWE executive and part-time wrestler Shane McMahon wrote on Twitter. “A true member of my family, mentor and dear friend. I love you Pat. God speed.”

“I’m deeply grateful to have grown up with @WWE Hall of Famer, the first-ever Intercontinental Champion, the father of the #RoyalRumble and the first openly gay wrestler of his generation,” Shane’s sister Stephanie McMahon, the chief brand officer of WWE, penned. “Thank you for teaching me how to not take it all so seriously. Abooze.”

“No words can describe what he gave to us,” her husband Paul “Triple H” Levesque, a former in-ring great and the person currently in charge of NXT, wrote. “His body as an in-ring performer, his mind as a storyteller, and his spirit as a beloved member of our large @WWE family. I will miss him for so many reasons… it’s never goodbye, it’s see ya down the road. Love you, Pat. Abooze.”

“Loss is incredibly difficult. Those we love are only truly gone if we stop caring,” John Cena said. “Pat Patterson lived life as it should be lived with passion, love and purpose. He helped so many and always entertained with a story or joke. He will live on in my life always. Love you Patrick.”

Patterson is considered the first openly gay wrestling superstar. His memoir, “Accepted: How the First Gay Superstar Changed WWE,” was published in 2016.

Read more about Pat Patterson’s life here, and find additional tributes to the pro-wrestling legend below.

That “My Way” reference is a nod to Patterson’s singing of the Frank Sinatra classic, most notably on WWE’s 2014 reality series “Legends’ House.”

And now, back to the tributes…