Mercedes (Brandee Evans) is the undisputed queen of the Pynk, the Mississippi Delta strip club that provides the setting for Starz’s electric new drama P-Valley. She gets the most prominent showcases every night, pulls in the biggest tips, and invites the most admiration and/or envy from the other entertainers. But she also knows that no stripper’s reign is a long one, and has already begun plotting an exit strategy: She will open up a gym to teach local girls how to dance. A realtor, skeptical of her business model, tells her she’s not selling a product — just an experience.

“Believe me,” Mercedes snaps back, “if there’s one thing I know how to sell, it’s experience.”

The same could be said for P-Valley itself. Adapted by Katori Hall from her play Pussy Valley, the series is terrific as an experience itself. The world of the Pynk, its dancers, and its owner Uncle Clifford (Nicco Annan) instantly comes to life in a way so many dramas try and fail to do from the jump. It’s a vibe show more than a story show — the plot is a familiar stew made up of shady land deals, stolen identities, and extramarital affairs — but that vibe borders on hypnotic. The Pynk and the people who work there feel real, and desperate, and all kinds of complicated.

The club is one of the few rays of neon light in the dying town of Chucalissa, where every storefront appears to be boarded up, every parking lot cracked, and talk of the good old days is more rumor than memory. (There’s even a “make Chucalissa great again” joke, albeit not delivered by Isaiah Washington — hiding behind a gold teeth and a deep-fried accent — as the crooked mayor up for re-election.) The Pynk is a dark, sweaty place, whose blue spotlights are focused on the stage where Mercedes, Autumn (Elarica Johnson), Miss Mississippi (Shannon Thornton), and Gidget (Skyler Joy) strut their stuff. For a few glorious moments at a time, cash and adoration rain down on them, and things feel like they’ll be OK. The club is the smallest of potatoes, but in this place, it’s everything, to the point where aspiring trap star Lil’ Murda (J. Alphonse Nicholson) seems to care about nothing but getting Mercedes to dance to one of his tracks. But there’s an inescapable sense that the dancers, like the town itself, are on the verge of being used up and squeezed out.

Strip clubs have been a ubiquitous prestige-TV locale going back to The Sopranos. The HBO mob drama used the Bada Bing for verisimilitude (where else would wiseguys want to hang out?) and as a sign of how casually and cruelly Tony and friends exploited people without better options. Too many cable and streaming series that followed, though, seemed to view strippers and other naked women as an expected perk that came with the cost of admission. Starz in particular has an embarrassing history with gratuitous nudity, with some dramas like Boss and Magic City at times feeling like exposed breasts were the real point, rather than those pesky stories and characters. There have been exceptions — if nothing else, Spartacus and Outlander have been equal-opportunity flesh peddlers — but the channel’s porn-iness has so often verged on self-parody, it’s a wonder it took until 2020 for a Starz show to arrive that is specifically about strippers.

But with Hall as showrunner, and an all-female lineup of directors — including Karena Evans, Kimberly Peirce, Millicent Shelton, and Tamra Davis — P-Valley‘s gaze is never a leering one. Though there’s occasional nudity, it tends to be matter-of-fact rather than prurient. Hall and company treat the dancers like athletes rather than objects, both in how much the camera focuses on the physicality required to fly around the pole like Mercedes does (even J.Lo would be impressed), and in the way they strap on gear and psych themselves up for each contest. But the stage can also take on a dreamlike quality, where it’s unclear how much of what we’re watching is actually happening and how much is what these desperate women might wish were happening in a place where even the fantasies have to be modest. 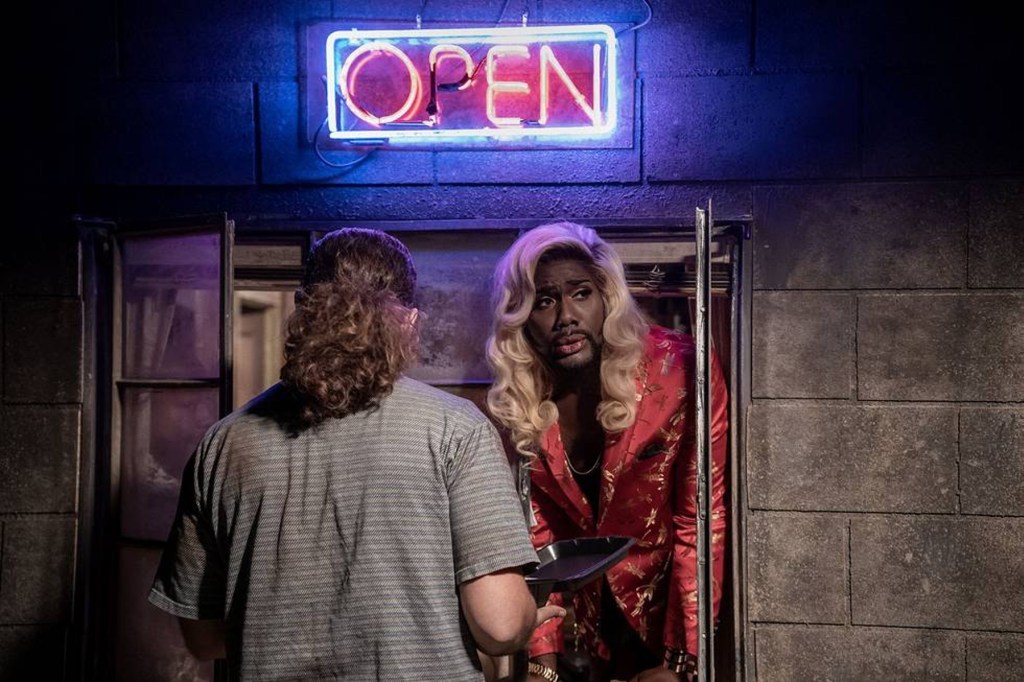 That rich, raw sense of atmosphere drives much of what works about P-Valley in the early going, along with how vividly etched many of the characters are. The imposing Uncle Clifford is non-binary, preferring she/her pronouns, sporting both an elaborately-groomed beard and fabulous fashions. In one episode, she pays a visit to an old cotton plantation, swathed in a bright red outfit that’s equal parts Antebellum debutante and dominatrix. Annan, reprising the role from the stage production, is the cast’s big breakout — cynical boss and sentimental mother hen in one shiny package — but Evans also pops off the screen as Mercedes, who understands all too well not only her own professional half-life, but the advantages a clumsy rookie like Autumn gets simply by virtue of being light-skinned. (When a customer chooses Autumn over her for a private dance, Mercedes sneers that some men “can’t handle themselves a Melanin Monroe.”)

Autumn is more directly wrapped up in the show’s various warmed-over story arcs, including one about local businessman Andre (Parker Sawyers) buying up property on the sly to pave way for a new casino. She’s set up as something of a femme fatale, but the buttoned-down nature of the role feels thankless compared to the way the other Pynk regulars are so open about themselves and their situations. Johnson holds the screen fairly well, but P-Valley sags whenever it lingers too long away from the club and on whatever scams Autumn gets herself into. It’s not hard to understand why Hall would lean on familiar tropes to turn a self-contained play into an ongoing series. But the parts of P-Valley that are just about understanding how this world works — even something so minor as Lil’ Murda showing Uncle Clifford a better way to cook chicken wings to avoid giving the customers (and dancers) gas — feel so much more lived-in and satisfying.

Though Andre suggests the casino will bring renewed prosperity to Chucalissa, it’s clear that this is a place where new sources of income for the residents will continue to be few and far between. The casino owners will keep the new money, while the best that Mercedes, Uncle Clifford, and the rest can hope for is to get their hands on what’s left of the old money as it moves around town. There’s a similar sense of P-Valley‘s plots being creaky old things that shift around the chess board because they always have, even though the show has so much richness elsewhere.

When we’re in the Pynk, seeing the other dancers react whenever Miss Mississippi offers a phony excuse for the injuries her abusive boyfriend gives her, or hearing Uncle Clifford explain her many rules for survival in a tough racket, or watching Mercedes and Autumn jockey for position, then everything else falls away. P-Valley is a trip, and an experience, and one that feels like nothing else on TV. You may smell the sweat the deeper in you get, but you won’t be eager to leave.