Our Biggest 'WandaVision' Questions: Who's the Beekeeper?

You’ve got questions…so do we 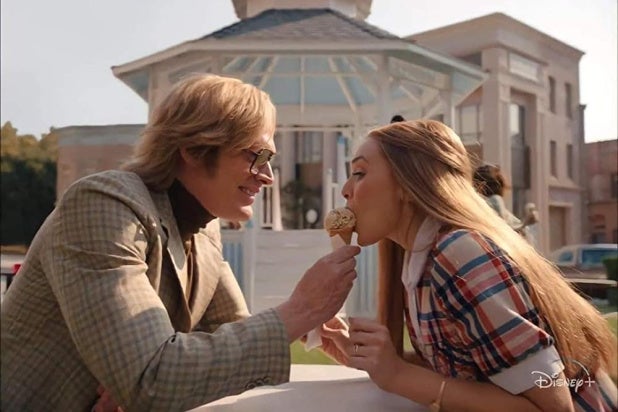 (Major spoilers ahead for the first three episodes of the first Marvel TV series, “WandaVision”)

It’s not a Marvel Cinematic Universe project if you’re not immediately bouncing theories off of friends or asking a question about something that wasn’t explained. The first three episodes of “WandaVision” are out now on Disney+, and naturally, there are a lot of questions to unpack. Namely…what the heck is going on in Westview?!

Who are the twins that Wanda gives birth to?

We don’t actually get confirmed names of the twins, though Wanda and Vision do debate between “Tommy” and “Billy” — which matches up with Tommy Shepherd and Billy Kaplan, Wanda’s twins from the comics and two of the Young Avengers. We’re pretty sure that this is the introduction of the superheroes Speed and Wiccan, especially since Marvel seems to be building to an eventual Young Avengers team-up. But only time will tell.

What actually is this place Wanda and Vision are stuck in?

The suburban town of Westview is apparently an idyllic, quiet town where Wanda and Vision have chosen to settle and live out their lives. But is it? Neither of them can remember why they moved there, where they were before or, really, anything at all about their previous lives beyond their crazy superpowers. Possible explanations for Westview’s existence include a warped reality in Wanda’s mind that she’s created to block out the trauma she’s experienced in the MCU, or something that an unrevealed third party put in place. Or something else entirely.

It’s easy to forget, after Wanda spent the last few movies mostly just using her powers to pound bad guys, that she also has mind powers. She can read people’s thoughts and influence them, as we saw her do a bunch of times in “Avengers: Age of Ultron.” Her mental abilities, which are derived from the very same Mind Stone that brought Vision to life, are more than capable of constructing this world in her mind — or in someone else’s.

Whatever the explanation, it appears that this world is a place that people can physically enter, judging by how Wanda ejected Geraldine from it at the end of the third episode. So we could be seeing the multiverse in action here.

On top of all that: why would it be a sitcom?

How is Vision even alive?

The sentient android, who we first met in 2015’s “Avengers: Age of Ultron,” met his unfortunate end at the hands of Thanos in “Avengers: Infinity War.” Although Tony Stark’s sacrifice in “Endgame” undid Thanos’ snap and brought back the 50% of the population that disappeared for five years, Vision stayed dead. Either because his his main source of life was one of the six Infinity Stones, or because he was killed before The Snap (Tony only brought back those snapped out of existence). So how is he in Westview, living a happy married life? The most obvious guess is that this is a reality constructed in Wanda’s mind, similar to the House of M comic storyline.

Since it feels so extremely unlikely that this show is taking place in actual reality, it would then also seem unlikely that Vision is truly “alive” again. But until we know what’s actually going on here, it’s tough to speculate on whether this story will lead to Vision’s return in films.

Why are Wanda and Vision even there?

This is, we guess, the true central question of this story. While it seems very likely that this whole world is some kind of mental construct, the more intriguing mystery is the why of it. Did Wanda do this to herself? Is another group — the folks apparently watching on monitors from the outside — responsible for it? And what’s the purpose of it? What those responsible trying to get out of it? There will inevitably be some kind of big reveal down the line.

What’s SWORD got to do with it?

Assuming you watched the first episodes of “WandaVision” on Disney+, you definitely saw that red toy helicopter with a weird sword logo on the side. That’s the logo for an organization called S.W.O.R.D., which is basically an outer space version of S.H.I.E.L.D., intended to defend Earth from alien threats.

Perhaps more relevant to this discussion is that S.W.O.R.D. was created for “X-Men” comics, and the organization’s history is pretty well tied to that of mutants. We wouldn’t have thought much of that fact before Disney merged with 20th Century Fox, when mutants were off the table for the MCU. But now, anything is possible.

A bigger question, maybe: is S.W.O.R.D. managing this simulation, or are they trying to help her escape from it? If it’s the latter, then there probably is another, as-yet-unrevealed party involved in all this.

You can read more about S.W.O.R.D. and what it might mean for the MCU moving forward here.

Why was Geraldine in Westview to begin with?

It feels like everyone in Westview has some ulterior motive. And Geraldine clearly seemed to realize something was amiss when she remembered details about Wanda’s brothers death. But why was she in Westview in the first place? Was she placed there against her will or unknowingly as a spy or an experiment? She was wearing a necklace with the S.W.O.R.D. symbol, which means she could have also been knowingly tasked to insert herself in Westview but lost all her memory once she got there — until Wanda’s mention of her brother jogged her memory. Right now, it’s all speculation, but we suspect we’ll find out sooner rather than later.

And what are Monica Rambeau and S.W.O.R.D. up to?

The character of Geraldine, as we knew coming into “WandaVision,” is actually Monica Rambeau — the young girl we met in “Captain Marvel.” Some time in the two-and-a-half decades between that movie and the present, Geraldine/Monica seemingly wound up involved with S.W.O.R.D., an organization she has no tie to in the comics.

But Monica was wearing their logo in the third episode, and so clearly she has some ties to the organization here — not hugely a surprise considering her mom was an Air Force pilot and could very well have become an astronaut after her foray into outer space in “Captain Marvel.”

When Monica “broke through” and brought up Wanda’s brother Pietro and Ultron, Wanda seemed to realize something was wrong. We don’t see what happened to Monica, but Wanda simply told Vision “she left” and when we do see her again, she’s waking up dazed and confused in the middle of a field, a bunch of agents (S.W.O.R.D. agents?) rushing towards her. And when the camera pulls back, we see what looks like some sort of forcefield dome, presumably where Westview is.

So where did she end up? We’re also confused. It does kinda recall the same field in New Mexico where Thor ended up when he was found by Jane and Darcy in the first “Thor” film. That’s probably just because the base is made of hastily assembled temporary buildings like the ones S.H.I.E.L.D. set up around Thor’s hammer — and maybe a little bit of wishful connective thinking on our end, too.

Our best guess? This is a facility built to try to break Wanda out of whatever this world of hers is.

Why did a beekeeper climb out of the sewer?

This guy had a S.W.O.R.D. logo on the back of his suit, so his allegiance is pretty clear. And Wanda says “No” and seemingly rewinds time when she sees him. That would seem to indicate Wanda is herself opposed to whatever S.W.O.R.D. is doing here. Since his appearance came after a series of big jolts to Wanda and Vision’s house, it would seem like they’re disrupting the simulation in some way — backing up our theory that S.W.O.R.D. is trying to help Wanda escape.

This guy is probably not a significant Marvel character on his own, though. The show credits stuntman Zac Henry as the beekeeper, and it’s not super likely that they’re going to give him a starring role.

Agnes is clearly more than a nosy neighbor. But who exactly is she? Could Agnes be a cover for Marvel witch Agatha Harkness, who is well known for being one of Wanda’s most notable mentors? If so, is Agnes the one controlling Wanda’s reality? Or is she acting as some sort of tutorial program, keeping Wanda engaged in this reality and life so she doesn’t suspect otherwise?

It’s worth pointing out that she certainly doesn’t like Geraldine, since she’s an outsider. So Agnes is probably key.

What’s up with those fake commercials?

“WandaVision” took its sitcom homages seriously, and that includes 50’s and 60’s style commercials. But why include them in the show, other than to add another layer of accuracy and detail? They all feature winking easter eggs ranging from Stark Industries to Hydra, which is fun on its own…will they eventually come together to mean something more?

What happens when Vision eats other things?

In the second episode, we saw what happens when Vision eats a piece of gum, swallowing it by accident. It stayed lodged in his body, affecting his movements. (He is an android, after all.) Vision tells Wanda in the first episode that he doesn’t eat food, and the gum incident seems to affirm why. But the gum only incapacitated him slightly, it didn’t exactly hurt him. So what happens when he eats other food? Does it affect his inner-workings the same way? Does it have no affect at all?

What was up with that red helicopter?

Wanda discovers a curious red toy helicopter in her front bushes, but it’s a mystery where it’s from. It does have the S.W.O.R.D. logo, however, along with the number 57 written on the side. All signs point to the fact that it’s something that came into Westview from the outside “real world,” but if that’s the case, how did it get warped in this reality? And was it a careless accident that the helicopter ended up there? Or did Geraldine or some other S.W.O.R.D. put it there to try to trigger Wanda out of this madness?

While we have no idea what the significance of the little helicopter is, the number 57 could be a meta-nod to the fact that Scarlet Witch was first introduced in the comics in 1964 — 57 years ago. But it certainly could have some actually plot relevance as well.
Who was that voice on the radio?

At one point during the second episode, a radio begins spitting out distorted sounds before a voice starts calling out to Wanda. “Who’s doing this to you, Wanda?” Could be a S.W.O.R.D. person, or maybe an MCU character we already know — the voice is distorted, so it’s tough to tell.

How did Wanda get pregnant?

It’s probably just an example of “WandaVision” doing a sitcom storyline, with the simulation simply making it happen because it’s supposed to. But it’s still pretty weird! And there are big implications to this — in the comics, Wanda’s twin boys grow up to be superheroes like their mom.

Why do Westview residents keep chanting “for the children”?

This chant would be weird under any circumstance, but that weirdness is amplified by the fact that there were zero children in the first two episodes of “WandaVision.” Obviously, this bit has some kind of significance, but it’s hard to guess what it would be just yet. We do have one idea, however, which you can read here.