‘Only Murders in the Building’ S2: 5 Characters Who Could Be the Killer

Editor’s Note: This article will discuss spoilers for the first six episodes of “Only Murders in the Building” Season 2.

The arrival of “Only Murders in the Building” Episode 6 brings us over halfway through the season. And while there are three more episodes to make an argument for a killer, odds are you have your theories. Like last season, some characters seem like obvious red herrings (Alice?). Maybe it’s a character we’ve known for years, like cat-lover Howard Morris. It can’t be Amy Schumer playing herself, could it?

Let’s look back at the season so far and see where we stand on who killed Arconia owner Bunny Folger.

Alice (Cara Delevingne) feels like the biggest red herring in the bunch, especially after last week’s episode where Oliver (Martin Short) revealed all her lies about being a wealthy rich kid. But at the end of that episode we found out she still had the Son of Sam card, and it was Mabel (Selena Gomez) who took the fall for her. Might Mabel’s newfound love be blinding her to Alice’s true intentions? Then again, what would Alice have to gain by killing Bunny? Is it to get closer to Mabel, specifically? Perhaps Alice has a deeper connection to Zoe (Olivia Reis), the former friend of Mabel’s who was, allegedly, pushed off the Arconia roof by Theo Dimas (James Caverly) last season? In talking to series showrunner John Hoffman via phone last week, he discussed creating a springboard between Season 1 and 2. Could Zoe’s demise be coming back to haunt Mabel and Bunny’s death was collateral damage.

Teddy Dimas (Nathan Lane) was a prime suspect in Season 1 so, automatically, he’s back here as a suspect in Season 2. Last season saw the Only Murders trio out Teddy and Theo as being grave robbers, as well as falsely accuse Mabel’s friend Oscar (Aaron Dominguez) of murder. Teddy was angry at having his world upended and, upon seeing Oliver earlier this season, he vowed that he was going to destroy the Only Murders crew. Could Bunny’s death be what he meant? We also saw in the last episode that Teddy and Oliver’s wife had an affair and Teddy might have a deeper connection to Oliver’s son. Honestly, he’s the most specious of the group, but fans shouldn’t discount him.

Suspect Level: Low. The dips are just too good to be criminal. 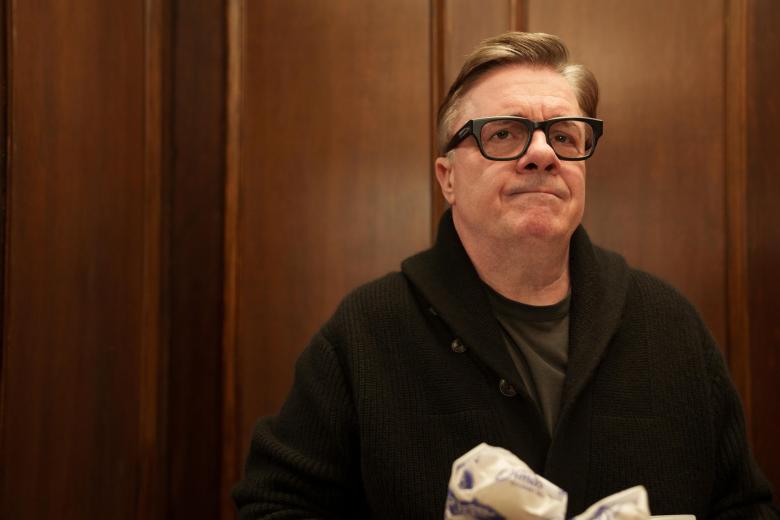 “Only Murders In The Building”

You might recall Ivan (Ariel Shafir) as the friendly waiter who talked to Bunny at the Pickle Diner every time she visited. For a woman with few friends, Bunny took a shine to Ivan and routinely left him big tips. And we know that money can often lead to murder. There are a lot of subtle things that imply Ivan might be the murderer. Bunny noticed that Ivan was struggling financially and admitted to Oliver that he wasn’t working the day Bunny came to meet a mysterious friend on the day of her death. Where was he at the time then? He also decided to return Bunny’s money, implying some level of regret though for what we don’t know. Maybe, like Zoe, Bunny’s death was an accident and Ivan feels bad? Then again, he and Bunny had a genuine friendship. Why kill his benefactor?

Suspect Level: Medium. There are too many questions about who he is, but he was the closest to Bunny.

Another familiar face from Season 1 is podcaster Cinda Canning (Tina Fey). Canning was the hero for our Only Murders trio when they initially embarked on their podcast, but soon became a rival. At the start of Season 2, Cinda crafted a podcast centered around Bunny Folger’s murder and it’s hard not to assume she, or her assistant Poppy White (Adina Verson), executed a murder in order to capitalize on the podcast glory. Is this Cinda’s attempt to destroy her competition, literally? Honestly, she seems a bit self-absorbed to have time to commit a murder, but in all the free time she has it’s not impossible. Not to mention her mad drive to chase ratings just makes for too compelling a motive.

Suspect Level: High. It might be a simple motive, but it’s the hottest of the bunch.

Honestly, Amy Schumer is either most definitely the killer or the red herring-iest of all red herrings. She came on very strong in the early episodes as the new famous tenant taking over Sting’s apartment. She was desperate to obtain the rights to the Only Murders story from Oliver and admitted to being highly Method as she prepared to play Jan (Amy Ryan), Charles’ girlfriend who was Season 1’s killer. What if Schumer heard the first season’s podcast and was so determined to find a way into the trio’s lives that she murdered Bunny? It sounds crazy but, hey, this is “Only Murders in the Building!” If a podcast host chasing ratings has a strong possibility at murder then a famous comedienne is just as worthy.

Suspect Level: High, if only because it would be so fun if it was her.

“Only Murders in the Building” streams every Tuesday on Hulu.