How NBC’s ‘Transplant’ Has Become a Stealth Hit

Netflix’s international cancellations dropped to a three-year low during the third quarter, according to new data shared by SimilarWeb, despite facing stiff criticism in the U.S. for the film “Cuties.”

The web analytics firm projects Netflix lost 2.5 million international subscribers (excluding Canadian customers) during the third quarter — down 10.3% from last quarter and 27.5% from the same time last year. The 2.5 million cancellations would be the fewest Netflix has lost since Q3 2017, SimilarWeb said. 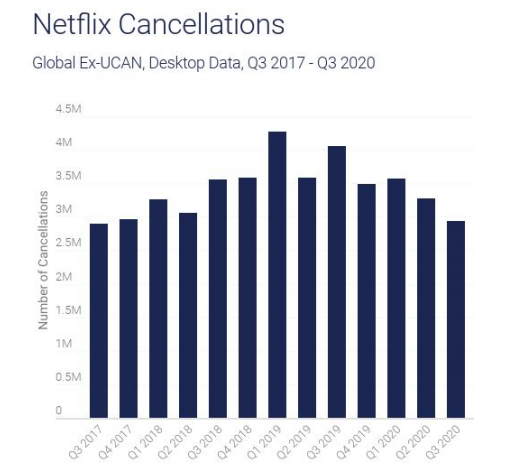 Of course, Netflix’s cancellations are usually offset by new customers signing up. The company reported more than seven million international accounts were added last quarter, for instance, despite 3.25 million global customers dropping their service during the same quarter.

Last month, a #CancelNetflix hashtag jumped to the top of Twitter’s trending section as some users complained the French film, which had just hit the service, depicted a hyper-sexualized view of minors and promoted pedophilia. The hashtag gained momentum after a scene from the film, showing young girls dancing in a suggestive manner in front of adult spectators, was shared on Twitter.

The furor continued this month when Netflix was indicted by a grand jury in a Texas county district court over claims the French film promotes “lewd visual material” depicting a child. Netflix defended “Cuties” in a statement afterward, saying it is “a social commentary against the sexualization of young children. This charge is without merit and we stand by the film.”

Notably, SimilarWeb’s projection stands in stark contrast to a recent report from Wells Fargo, which said Netflix could lose several million subscribers in Q3 due to the “Cuties” uproar.

Wells Fargo analyst Steve Cahall, in a note to clients, slashed his third quarter estimate by 50% to 2.5 million new subscribers, while pointing to the “short-lived but potentially stark churn uptick in September due to controversy around ‘Cuties.’” The bulk of those subscriber cancellations will come from the U.S. and Canada, Cahall said, because that’s where “Cuties” received the most criticism.

SimilarWeb’s data did not include a projection on U.S. cancellations but the streaming giant rarely loses ground domestically. In July 2019, Netflix reported it lost subscribers U.S. subscribers for the first time since 2011, with the company pointing to price hikes as the culprit. It’ll be worth keeping an eye on domestic cancellations next Tuesday to see if the “Cuties” blowback truly impacted Netflix’s sales.

To read more on what analysts expect from Netflix next week, click here.