Strictly Come Dancing saw the show’s 12 couples back to compete for their second routines before two couples will face the dreaded dance-off tomorrow night. As ever, the judging panel of Motsi Mabuse, Craig Revel Horwood and Shirley Ballas were on-hand to critique the stars but fans soon got talking over the former’s bold look, with wild 80s style hair and a stunning purple off-the-shoulder dress.

Motsi stepped out alongside her fellow judges and as ever, was dressed to impress.

Another commented: “Motsi always wears the BEST dresses, her stylist is insane #Strictly.” 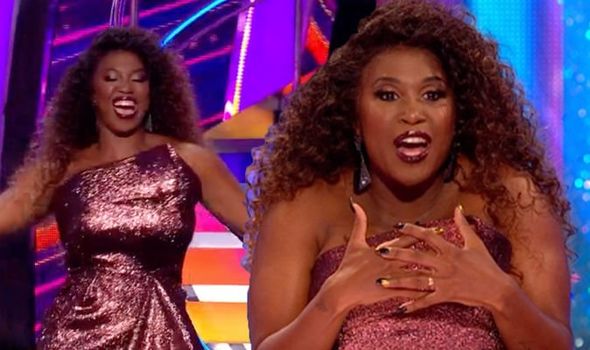 With the competition already hotting up, fans of the show are beginning to speculate as to who will take home the coveted Glitterball Trophy.

Last weekend, it was HRVY and Maisie Smith who found themselves at the top of the leaderboard.

After HRVY’s sensational Jive saw him only just miss out on 10 points from judge Motsi Mabuse, the star is now the bookmakers favourite to win the competition.

“HRVY was a 5/1 chance before the show’s opening night but punters are backing him to go all the way. He is now the 7/4 favourite to lift the Glitterball Trophy this winter,” said Coral’s Harry Aitkenhead.

But he will have some close competition to deal with as EastEnders star Maisie is just behind at 2/1 odds.

However, it’s former Home Secretary Jacqui Smith who is suspected to be the first casualty of the dreaded dance-off this weekend alongside partner Anton Du Beke.

Jacqui found herself at the bottom of the leaderboard for her politically-themed Foxtrot, which led to Craig Revel Horwood awarding her just three points for her routine.

“We think it’s going to be the end of the road already for Jacqui, making her odds on to be the first celeb sent packing on Strictly 2020,” added Aitkenhead.