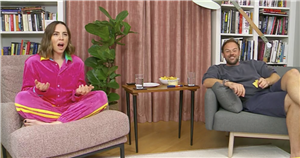 Mel C couldn't hold back from having a veiled dig at her former Spice Girls bandmates on Celebrity Gogglebox.

Sporty Spice has been appearing on the show alongside her half-brother and motor racing driver Paul, watching the best and brightest of telly from the last week.

But on Friday night, the telly watchers were tasked with viewing Extreme Siblings, which showed a pair of twins who, bizarrely, showered together and shared the same boyfriend.

The twins even had to do everything the other was doing, and demonstrated with one sister vacuuming and the other mimicking the motion with no hoover in hand.

And they even spoke at the same time, giving their sentences an echoing effect, as they couldn't quite time it right.

Mel C suggested that they needed to "practice more", before abruptly cutting herself off.

Fans immediately flocked to Twitter to share their own giggles at Mel's off the cuff comment, with one quoting: "Mel C: 'These twins need to practice talking together. It's like trying to sing with the Spice Girls!'"

As Mel appeared on Good Morning Britain, host Kate Garraway wondered: " "Your tour was great wasn’t it, I guess another one, maybe even with Victoria involved, would be good?"

"Well you know, that’s the dream. All of us feel the shows went well," Mel C admitted, hinting a reunion wasn’t off the table.

"It was mind-blowing. It was so much better than we ever could have dreamed of. And we’d be absolute fools to not want to do it again.

"We’d love to play the UK, even go further afield, there are territories we never got to as a live band in south-east Asia and Australia."

Victoria has declined to take part in the reunion, citing family and business commitments – but fans are holding out that she'll change her mind in future.