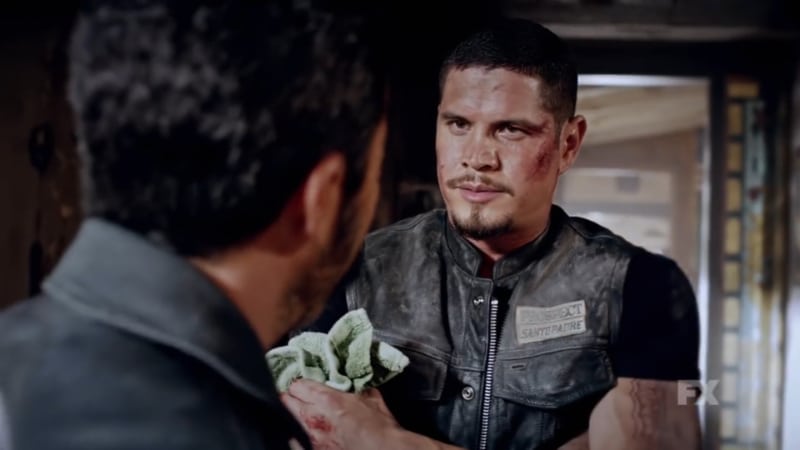 Mayans M.C. brings us closer to the Season 1 finale with episode 7 and the preview does not disappoint. Bishop has a run in with the law that may not end well and some may have to reveal their true identities and the reasons they don’t use them.

Directed by Rachel Goldberg, the synopsis of Cucaracha/K’uruch reads, “New secrets are brought to light, putting the M.C. at odds.”

The preview for episode 7 begins as Bishop asks Angel how much time remains on EZ Reyes’ prospecting term to which is revealed to be 8 months. 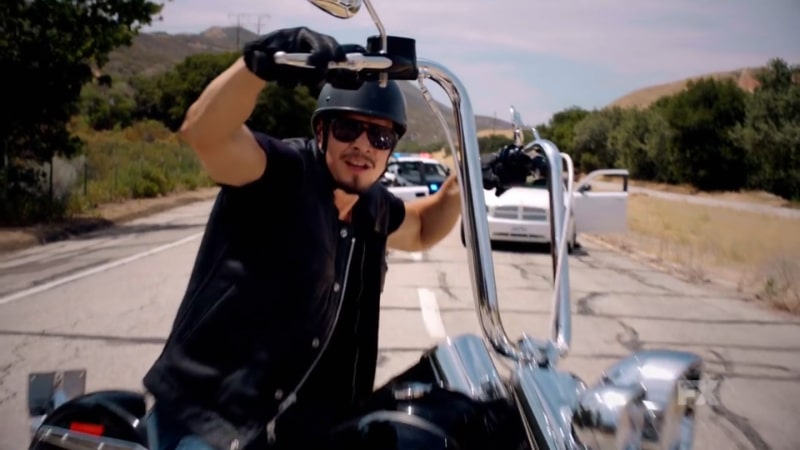 When President Bishop (Michael Irby) says “It’s going to be a very long 8 months,” we see EZ (JD Pardo) on his motorcycle, surrounded by police cars.

EZ being stopped by police could be due to many things, but what comes to mind is a circumstance regarding the club or EZ’s DEA informant deal. 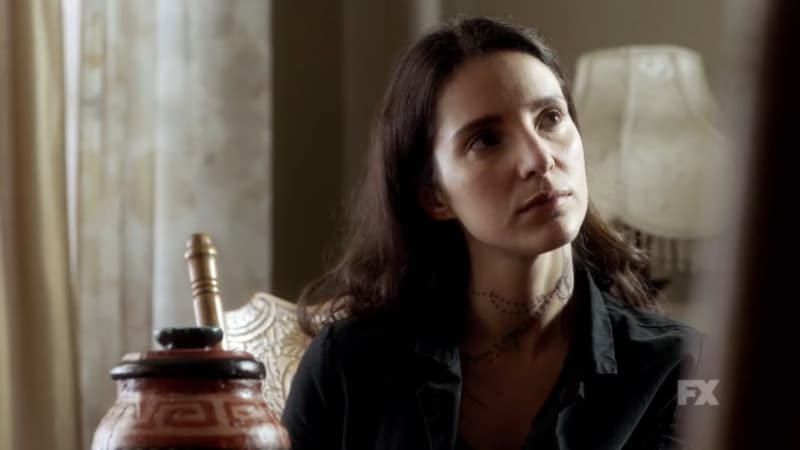 We then see Adelita (Carla Baratta) paying an unexpected visit to Felipe Reyes (Edward James Olmos). Adelita rests her gun on the table where we see that she has moved the urn from its usual spot to the table.

We know this is the urn that contains the ashes of Felipe’s deceased wife. Felipe and EZ have paid respects to her in past episodes.

It seems that Adelita knows about Felipe’s past, even using his real name- Ignacio Cortina. We will have to see how she knows this information and why she has chosen to move his wife’s urn. 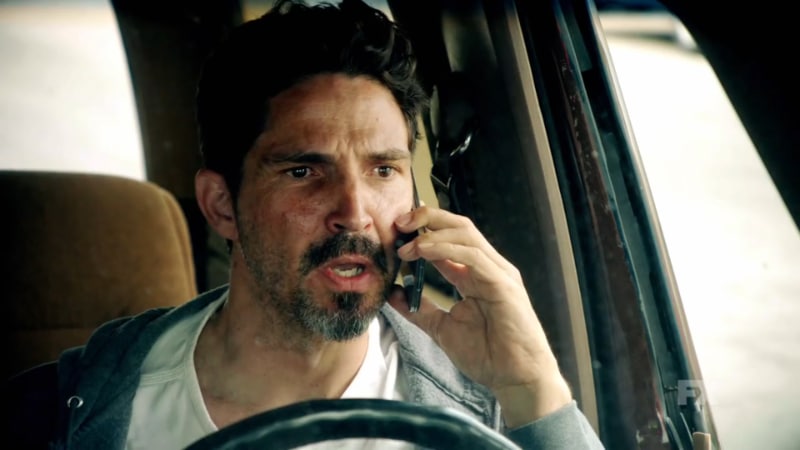 The preview then shows Kevin on the phone saying, “You need to steer clear of the Mayans”.

In the past, Kevin has met directly with EZ and Felipe in person, never speaking to them over the phone. So who is Kevin giving this warning to? 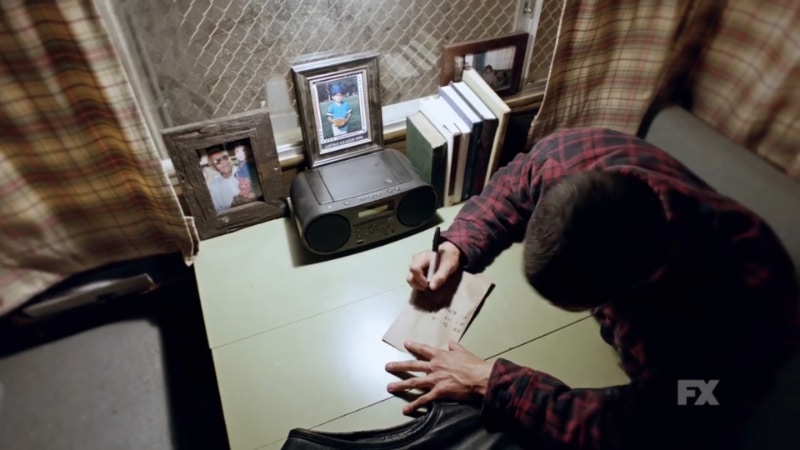 There is a shot of EZ in the RV that is parked on the club property writing a note on a piece of paper. We noticed that EZ’s notes look similar to the codes he gave his father Felipe in episode 1 for Kevin Jimenez (Maurice Compte).

It looks like this is supposed to be the next drop of intel for the DEA, insinuating that EZ’s deal is still ongoing at least for one more episode.

The Cucaracha/ K’uruch preview then quickly cuts to President Bishop inside the temple (The temple is what the Mayans M.C. call their chapel) telling EZ that he’s a smart kid as we see EZ is in pretty bad shape. This might occur after the scene where we saw of EZ surrounded by police, since in that shot, EZ was not beaten up.

Behind Bishop are the full patch members, Angel Gilly and Creeper. So we might be able to assume the whole charter is there as well. Due to EZ being a prospect, are these injuries a result of club interrogation on his knowledge of Adelita? We will have to wait and see for confirmation. 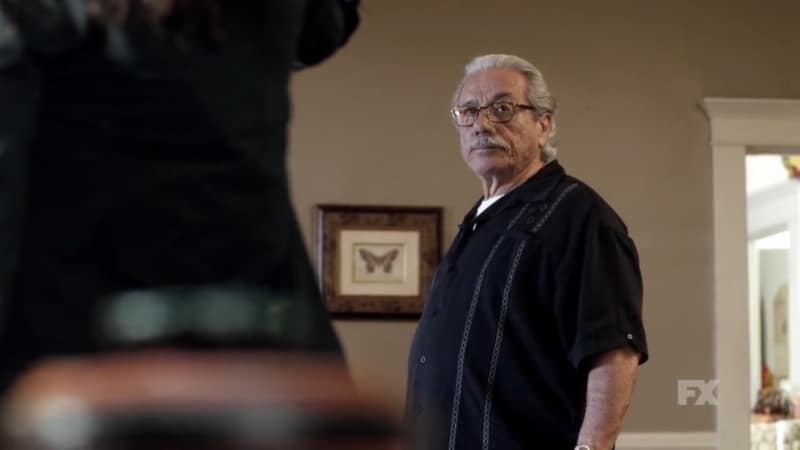 Later in the preview, Adelita holds Felipe at gunpoint and he remarks there is something that she has to see. We learned in episode 6 that Adelita’s real name is Luisa Espina and she shares the same last name as Felipe’s partner who we have theorized to be Adelita’s father.

The burning question is; what has caused Adelita to hold Felipe at gunpoint? What we can assume will happen, is that Felipe will tell her about his partner. 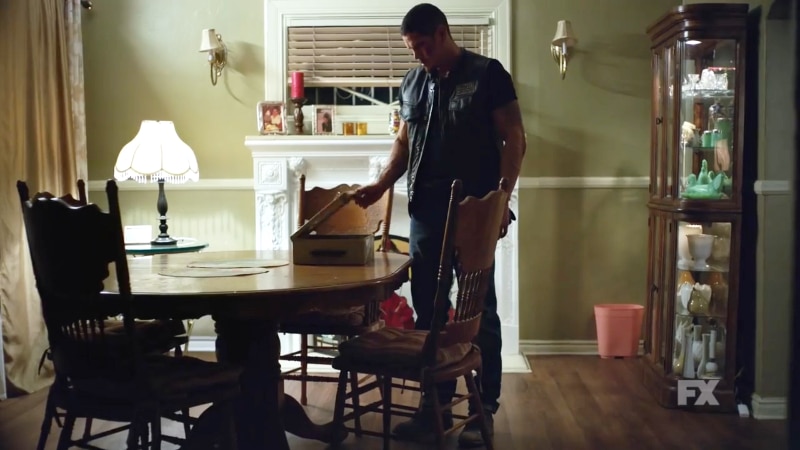 While quick, the most exciting shot in the preview was of EZ opening up the lockbox in which Felipe keeps all of his photos and documents of his real identity.

Given that this scene appears to take place at night, and EZ’s injuries are visible, we can assume that this occurs after EZ returns home from the clubhouse where he finally learns the truth about his father.

With Miguel (Danny Pino) apprehended by security in the last episode, it may be up to Emily and Devonte to free Miguel and retrieve Cristobal. We will have to see if they find out where the security guards took Cristobal and if there are pending charges on Miguel after being caught with heroin inside the blanket his son was wrapped in.

We may see a different side of Emily (Sarah Bolger) as she has to step up in her husband’s place with the help of Devonte (Tony Plana) and Dita (Ada Maris).

After the big reveal at the end of episode 6 that Sons of Anarchy Season 4 antagonist Lincoln Potter has returned, whether he sits out this new episode or appears again is up in the air. It was insinuated that Potter (Ray McKinnon) is above Kevin’s boss and pulling the strings of EZ’s informant deal to take down the Galindo Cartel, just as he attempted to do many years ago.

If Lincoln returns for episode 7, we may find that Kevin will bump heads with his boss after his change of heart regarding using his second cousin EZ Reyes.

Gilly, Creeper, Riz, and Taza will return from Vegas and the investigation into Coco will continue.
In the preview, Taza is present. Given the growing concern over Coco from the last episode, expect to see Bishop and Hank fill Taza in not only on who they suspect the mole to be but also continue to press Coco on whether or not he knows Adelita.

We will also have to see how Angel reacts to what EZ overheard in the salvage yard office regarding Bishop and Hank grilling Chucky about Coco and his daughter, suspecting that Leti is Adelita. Will Angel even tell Coco they suspect him or will he keep this knowledge to himself?

Last but certainly not least, there is the appearance of the cockroach. Episode 7’s title “Cucaracha/K’uruch” is named after the Spanish and Mayan word for cockroach, the pest that no one wants to find in their kitchen. So keep an out for all appearances of the nasty little buggers in the upcoming episode.