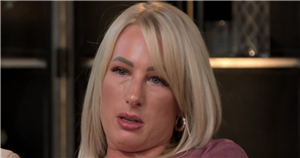 Married At First Sight UK viewers have shared a series of hilarious tweets and memes on social media after being left outraged by Channel 4's massive blunder on Thursday 30 September.

E4 mistakenly aired Wednesday's episode of vow renewals, before the screen completely froze and a purple message displayed, which read: "Programme will resume shortly". It then played First Dates instead of the show.

While the broadcasting giant has since revealed the air date and time of the finale as well as MAFS Afters, it didn't stop fans from hitting out following the blunder.

Fans flocked to Twitter to share their outrage as one person wrote: "Good morning and happy Friday to everyone except E4, i hope they spend the whole day standing on upturned plugs and lego. #MAFSUK".

Another wrote: "Waiting patiently for #MAFSUK finale on @All4 When is it coming @E4Tweets ? Talk about a cliffhanger! After all of this we better see Luke in his fireman’s uniforms again," followed by a crying with laughter emoji and a tightly-closed eyes emoji.

A third dramatically questioned: "What if there is no final episode and we are left to wonder the earth never knowing what happens to luke and moral, or if josh and Amy make it. Going from door to door begging strangers on the street for a tiny piece of information about Adam and Tay. #mafsuk".

"Does #channel4 even realise how much they’re ruining my life right now #mafsuk," a fourth added, while another Twitter user shared: "Feel like I’m the only one who finds E4 accidentally showing last nights episode of #MAFSUK again hilarious," with three crying with laughter emojis.

Many also shared memes on the social media channel, including one person who posted a photo of Tayah Victoria from the final dinner party with her eyes wide open while looking down. It was captioned: "Still waiting for #MAFSUK to resume…"

Another user shared a GIF of a grey cat looking disheveled as the camera zoomed out, over which they asked: "So did anyone preserve with #E4 #MAFSUK and is still sat waiting for the finale?"

One meme saw a man in a suit pulling a plug out of a wall before smiling at the camera and then replacing it. The man could be seen saying: "Oh, just kidding! Haha…" and the viewer captioned it: "It wasn't me … honest @E4Tweets #MAFSUK," with two crying with laughter emoji.

Meanwhile, one person created a poll, titled: "#mafsuk The final didn’t play because of". The option of "legal threat" got 8.8 per cent of votes, "Boris hates C4," received 16.2 per cent, "Petrol shortage no staff," had 33.8 per cent of votes while the winning option came out as "Someone wiped the tape," which got 41.2 per cent.

Married At First Sight UK airs on Thursday and Monday at 9pm on E4. Catch up on the series so far on All 4.

For more juicy gossip on your favourite stars, Married at First Sight UK and the couples, sign up to our daily newsletter here.