‘Luxor’ Review: Andrea Riseborough Unearths Love Among the Ruins in ‘Before Sunset’-Esque Tale

British aid worker Hana (Andrea Riseborough) is on leave and a little bit lost in Egypt, a place she once left behind. She’s perpetually in a state of psychological deja vu, which becomes quite literal when she bumps into her ex. Zeina Durra’s “Luxor” powerfully evokes that indefinable ache of revisiting a lost love that probably has a frankensteined German word for it. Here, it mostly finds its expression visually, and in Riseborough’s searching face, in a measured nostalgia trip that brings to mind a more melancholy “Before Sunset.”

The city of Luxor, Egypt, is as crumbled as Hana’s soul, emptied out after witnessing myriad atrocities at the Jordan-Syrian border working in a war trauma unit. What she’s looking for in this ancient place is something ineffable, a slowed-down change of scenery to wipe away gruesome memories.

Hana idles in the bar at the sleepy Winter Palace Hotel where she’s staying, picking up a crass American tourist for a one night stand she very quickly flees. While on a ferry headed for some archaeological sightseeing, she runs into Sultan (warmly played by Karim Saleh), an old boyfriend from forever ago. “I didn’t think you’d be here,” she says, meaning, perhaps, that she secretly hoped he might be. Sultan is an archaeologist living in Luxor who’s also single and adrift — making for a perfectly terrible, ruinous wrecking ball to come crashing into Hana’s already shattered life.

Hana and Sultan spend their days wandering the ruins of Luxor, sharing a joint one night wedged between a pair of columns, laughing about the past and why they split. Sultan handles Hana with care, but continues to pursue her during her stay, even if at a distance. She’s more circumspect, with perhaps too many emotional walls built up to give into what’s resurfacing between them. A visit to the massive dig he’s currently working on in the Valley of the Kings stirs unrest in Hana, who has undefined memories of the location from decades ago. Hana’s past is a bit of a blank, only thinly sketched by Durra’s screenplay, though like the protagonist, the film is mostly interested in the forward-moving train of life and not so keen on looking back.

Cinematographer Zelmira Gainza’s camera glides smoothly through spaces and places, almost like a drone hovering at eye level. “Luxor” has a quiet aura, and the leisurely gait of a late Abbas Kiarostami film like “Certified Copy,” another romantic drama about walking and talking through the past, while stuck in the muddled present. 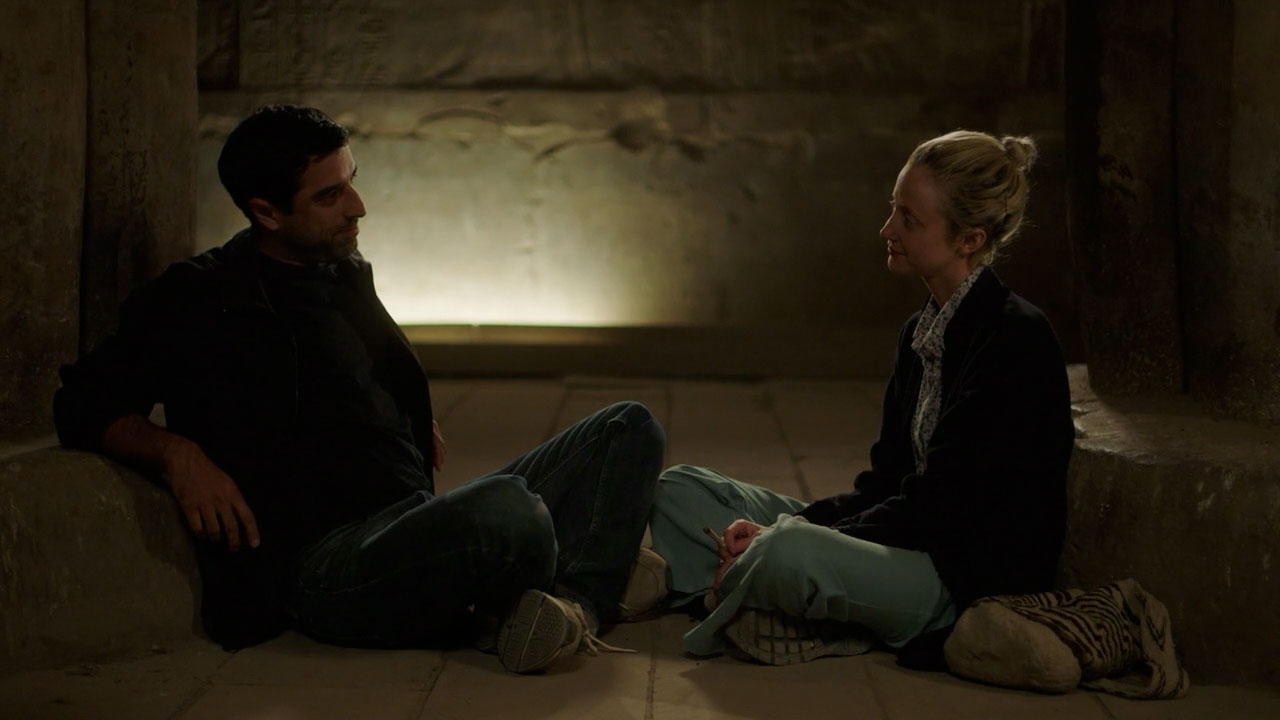 This film’s low-key style finally erupts in a scene that’s iconic Andrea Riseborough, as a drunken, cigarette-slinging Hana bursts into a spontaneous solo dance that freakily descends into performance art-levels of debasement as she writhes on the floor of a bar with a vacant expression. You almost expect her to start foaming at the mouth. Since putting feeling to words doesn’t come easily to her, it’s a natural expression of her state of mind, and almost like a self-induced exorcism because, the next day, her head is a little clearer. “I come from a dark place. I’ve seen things no one else should see. I’m broken. I can’t take anymore pain,” she tells Sultan at a point that most bluntly articulates her PTSD-addled psyche.

Durra has a fondness for capturing the local population floating around the city, with small interactions between Hana and the locals offering some charming asides from the movie’s emotional heaviness. “Luxor” hardly tackles the disrepair of tourism in Egypt, and it keeps the bombs and blasts happening close by in the Middle East far out of the frames — until a hallucinatory reverie hints at one of Hana’s most wrenching moments on the job. Those elements feel like missed opportunities, though at a tight 80 minutes, “Luxor” hardly has a frame to spare.

Amid this otherwise minor, slight offering, Andrea Riseborough’s performance is a major force. There’s arguably no better actress working today capable of registering regret, sadness, and joy with a simple manipulation of her gaze. (Her cheeky reaction to a run-in with a possible ex of Sultan’s own is priceless.) Riseborough masterfully carries “Luxor” to its surprisingly hopeful conclusion, a sweet send-off in a movie that captures the gut-ache of ruminating on lost love, and the pain of an expiration date hanging over a brief encounter that maybe doesn’t have to end.

“Luxor” is available on digital and VOD Friday, December 4 from Samuel Goldwyn Films.